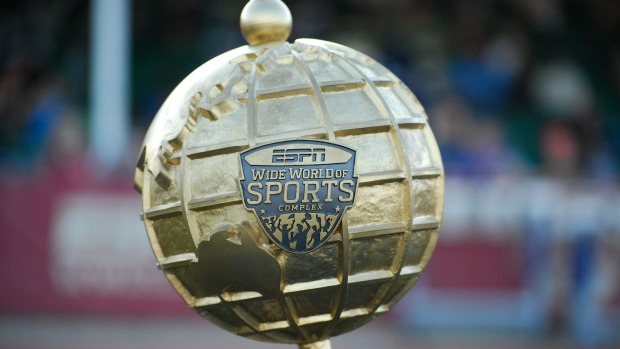 Athletes across the state and from the southeast headed to the Mouse House, Disney's Wide World of Sports, for the Disney Track & Field Showcase. It was a beautiful afternoon for running and a bunch of local athletes left the event with some shiny medals around their necks. 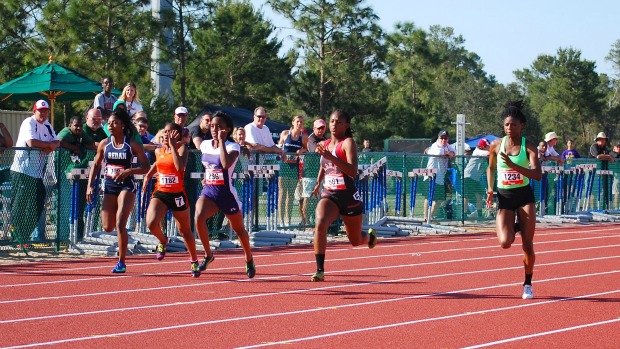 Lake Highland Prep junior Deanna Hill didn't have her fastest time in the 100 meter dash with a 12.31 showing, but was able to pull out the win against some tough competition including Erin Ford and Dr. Krop's Adriana Allen. Hill led the Highlanders to a victory in the 4x100 meter relay, and finished second in the 200. 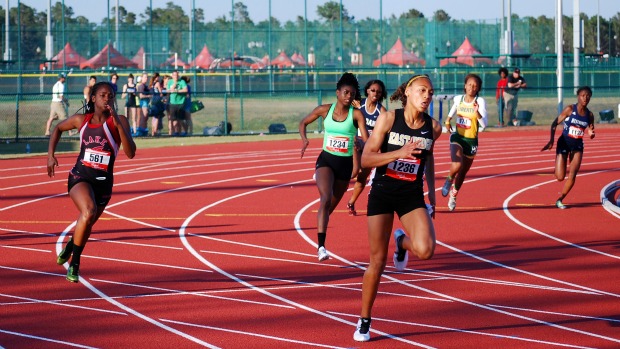 Those three also ran the 200, but none were able to rise to the occasion against phenomenal frosh Kaylin Whitney of East Ridge. Whitney ran the night before so only competed in one event at the Disney Track & Field Showcase. She came around the turn like someone shot her out of a cannon, cruising past the rest of the field in a time of 23.54 the fastest in the state for 2013. She's been racing so long that she isn't afraid of the older competition. Watch out for Whitney come time for the state meet.

Dr. Krop senior Adriana Allen came in to the quarter mile with a seed time of 54.52 and ran a new season best and state leading time of 54.22. Allen had a great afternoon finishing 2nd in the 200, the 4x400 meter relay, and fifth in the 200 to round out her day. If you count prelims as well, that is a lot of running in one day! 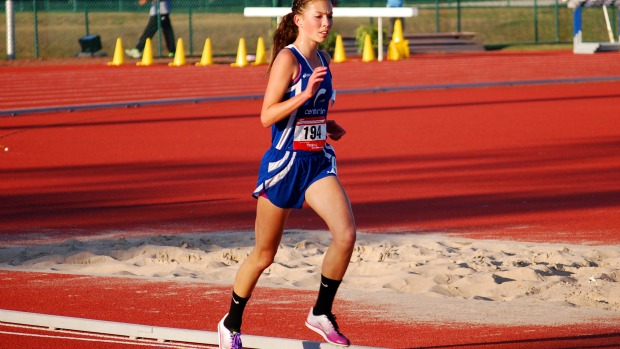 The out of state competition stole wins in the 800 and 1600, but Florida defended their home turf in the 3200 meters. A pair of freshman, Lake Nona's Adair Lyden and Circle Christian's Denae Chapman were the leaders for the first and second half of the race. Chapman passed Lyden with about three laps to go and came away with the win in a new personal best time of 11:19.88. 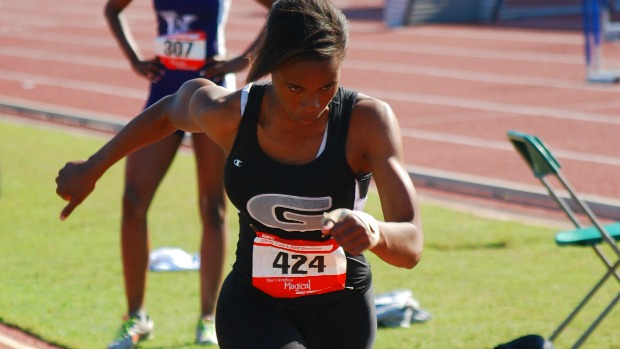 Other notable performances include Kaila Smith of South Carolina who won both the 100 and 300 hurdles, Allie Buchalski of Georgia who dominated the 1600 with a time of 5:04.80, Addie Harden of Berkeley Prep who finished second in the discus and fourth in the shot put, and Amber Jackson of Gateway who won both the long jump and triple jump.

Dr. Krop led by Adriana Allen took the girls team title with 54 points. Nova Scotia was second (49 points) and Redan out of Georgia was third with 43 points. 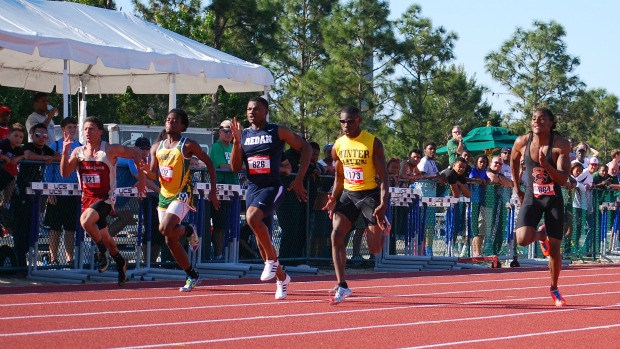 On the boys side, Winter Haven junior Bennie Wesley proved he is back. Wesley has been injury prone his first couple of years, but says he is feeling healthy and ready to live up the hype he had on the AAU circuit as a youngster. He ran 11.04 to beat a tough field, and then followed that up with an impressive leg of the team's winning 4x100 meter relay. Kwad Smith of First Academy, ran unattached and won the 200 in 22.23.

Florida went 1-2-3 in the quarter mile. Brylan Slay of Winter Park proved he will be one of the guys to beat at the state meet posting a time of 47.43 for the win. Khari Herbert of American Heritage was second, with Colonial distance standout Andres Arroyo coming in third. 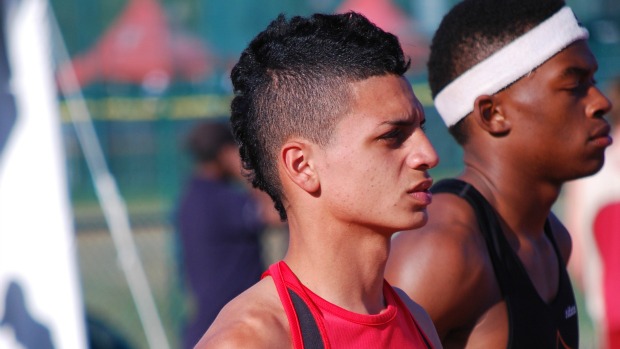 Arroyo started running first thing in the morning with the 4x800 meter relay. It was the first time Arroyo ran on the relay team, the four some posted a very nice time of 7:56.68, the states, fastest for 2013. That wasn't the only relay for Arroyo, he closed out the night anchoring the Grenadiers to a win in the 4x400 and mowed some runners down in the process. The win over Winter Park (featuring Slay and John Lindsey) gave Colonial the points they needed to finish third in the team standings behind Winter Park.

In the distance events, Winter Park's John Lindsey had a busy day. He started out the afternoon with the 2000 meter steeple chase. He ran the event to run against Nova Scotia's Tobias Wolter, but the Canadian had more in the tank at the end of the race. Lindsey finished second in 6:20.10. He also finished second in the 800 meters after being out kicked at the end by Bishop Kenny junior David Yarborough. Lindsey joked at the end of the day that he looked better in silver, but I am sure there are more gold medals in the seniors future before the season is over. 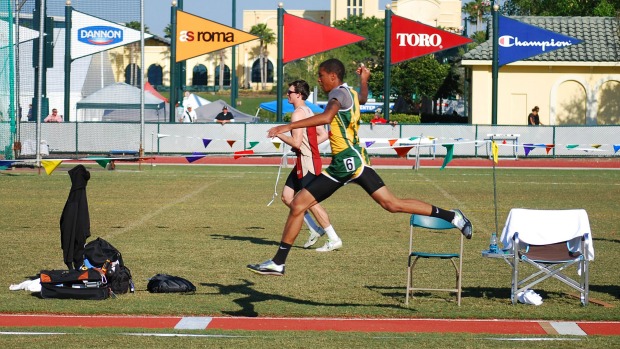 Golden Gate junior Alex Padraza is off to a great track season after winning the 2A Cross Country Finals. Padraza got passed by two runners in the last 20 meters of the 1600 meters to finish fourth, and then bounced back to finish second in the 3200 meters. Max Borland of Berkeley Prep won the race in a time of 9:42.78. Other impressive performances include the Liberty jumpers Joshua Wilson, Markel Brown, and Perrion Hopkinson . Wilson and Brown went 1-2 in the long jump while Brown, Hopksin, and Wilson went 1-5-8 in the triple jump. Those thirty points helped Liberty win the team title with 65.50 points. Winter Park led by strong performances from Slay and Lindsey finished second with 60 points. Colonial edged out Redan of Georgia for third place with 51 points. 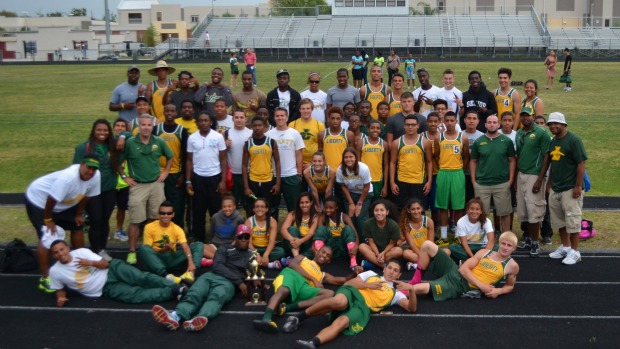