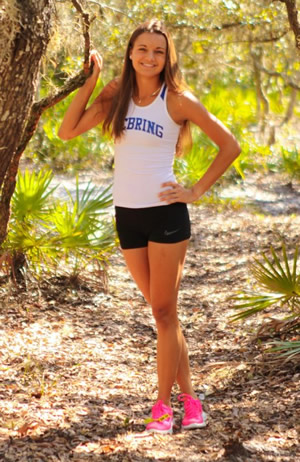 Taylor Tubbs is the top distance runner at Sebring High School, which is in the county seat of the rural Highlands County in Florida's Heartland. It is an hour and a half from anywhere. It is home to cattle, citrus groves, and the famous 12 Hours of Sebring. It also happens to be the alma mater of yours truly, flrunners.com founder Jason Byrne. As an alum I have proudly watched (usually from afar) as Taylor progressed these last few years. Last year she really broke out. This track season, she has already surpassed my wildest expectations for what she'd achieve this season.... and her own!

On Tuesday night at a home meet at Fireman's Field in Sebring, a low entry count in the girls 1600 prompted the meet management staff to decide to run both genders together. As a result, Tubbs for once had someone to race against (which has only happened once before this season at the Steinbrenner Invitational)... at least for a little bit, that is before she left the boys in her dust!

The senior, who has signed with the University of Florida, out-hustled her male and female counterparts by about ten seconds to win with a Florida #2 and current US #4 time of 4:54.50! Looking forward to the Florida Relays the young harrier needs to set new goals, already having blown by her own season-end goal of 4:56.

Taylor answers a few questions for me about the race, her season, and her future.

So you had a really great afternoon! You ran a 4:54 which is #2 in the state right now and one of the early season national leaders. How did it feel when you saw your time?
I was pretty surprised actually! I went into the race feeling unprepared & unmotivated, but then the coaches said that since only 5 girls total were running the race, they'd let us join in the boys race! One of my teammates, Damian Foster, said he was gonna pace off me, because his PR is 5:03 and we were gonna be close. Neither of us said we felt good, so the plan was just to cruise it in around 5:10. We went out a 1:11, and I was like dang, I feel good! I was right on his shoulder until the 800, which we came through in 2:27. Then I passed him on the curve and came through the 1200 at 4:41, and pushed through the last lap to a 4:54 finish. None of the other boys were really a factor in the race.
Do you train with the boys team most days?
In track, pretty much every day! Damian and his indential twin Eric ran with me today
So was there any friendly trash talk or hurt egos on their part to have a girl totally trash their PR?
hahahaha! Nah they were super excited for me, they don't see it as "omg a girl beat me!" They see me as one of their equal teammates which makes it even better
You've got to be having a lot of thoughts going through your head right now, because going from 5-flat to 4:54 is a huge leap. That really moves you from being on the podium at state to thinking you might win it. And even thinking about some national meets. Have you really had that sink in yet? Or did it change your outlook or goals for the season?
My total goal for this season was just to run a 4:56- so you're right, that's a huge leap. Honestly it hasn't sunk it at all, I'll remember and just start grinning again because I can't believe it! I checked the natioanl rankings and I'm 4th...which is crazy. Like that can't be right! Winning state would be awesome, but 3A is super competitive and Emily Edwards is right there in front of me!
Yes, right now you are #4 in the nation. Of course, many of the states haven't started their outdoor season yet, but still that is up there. And 4:50 territory you start even thinking about potential Dream Mile invitations. The 3A is definitely competitive with Edwards and Olivia Ortiz (depending on how quickly she can get healthy) and plenty of others. But you are certainly right there in the mix now.
That's why it's all so crazy for me! Because I don't even know what the Dream Mile is. lol it's all so over my head because nobody here knows about it either. It'll be so exciting to get to UF next year and have the best training and the best racing schedule and health foods I just have to learn to preform well at the big meets now too!
lol Well you and I need to talk when I'm back home next week for Easter! I'll educate you on some of that. Yes, you have gotten to know a lot of your future teammates at UF already. How ready are you for that next chapter?
I'm super excited! I leave in exactly 100 days. I'm as ready as I'm going to be too, there's a lot of people from my school going up there and I think it'll be a great new experience. Not easy, but the best things in life never are!
I see you're involved in a lot of clubs and groups in Sebring. What will you miss most?
I won't miss one thing in specific, but just the community of living in Sebring. People know everyone, and I can't go anywhere without running into a friend
Last question. Besides state, what other big meets will we see you in this year if any?
I'm going to UF (Florida Relays), and that is really my only other big one. Hopefully I can have a good showing at my future home, that's where I set my last PR!
Awesome, Taylor, thanks for taking the time to talk to me. Congrats! It's always really awesome for me personally to see someone from my alma mater--where flrunners all started from--doing so well! Good luck with the rest of your season and figuring out what your new goals are.