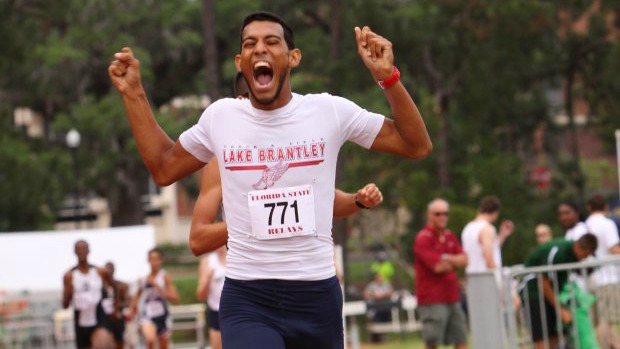 After graduating from Lake Brantley last year, Otniel Teixeira, the 4A state champion in the 800 meters, decided to take his talents to the University of South Florida. Now after his first year, he has decided to take a different direction and transfer to Florida State University. He says it was time for a change.

"My first year at USF was alright, but I got injured in November I was out for a month. I switched because of family issues and because I wasn't seeing much improvement In the 800. I'm not blaming it on the program I just feel like I need a change. USF was fun and a good experience. but it's time to start fresh new at my new home. My parents wanted me to go there and I was cool with Coach Braman from before.I hoped he had a place for me there and he did."

Following the Big East championships, Teixeira did not stop training. He flew out to California to train with four time Olympian and nine time World Champion Zequinha Barbosa from his native Brazil. He spent the last month preparing for the USA Junior Track & Field Championships this week in Des Moines, Iowa. He hopes to run a new personal best of 1:49 and set the tone for the rest of the year, and future.

"That's the goal. Then I want to run 1:46 by the time I'm a senior. The 2016 Olympics in Rio De Janeiro, Brazil is what is on my mind since its in my home country. The other goal is to make Coach Braman proud and contribute to the team as much as I can so we can continue to win ACC and qualify for the NCAA Championship."