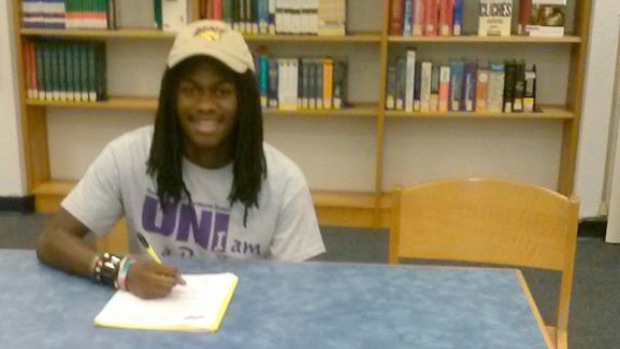 For Brandon Carnes, the recruiting process has done a 180 over the last few weeks. When we featured him in an under the radar article, the Manatee senior reporter he had no offers and not much interest. However, that changed soon after and Carnes began hearing from the likes of USF, UNC, Alabama, East Tennessee State, and Tulsa. It was unexpected interested from Northern Iowa and a visit to the Cedar Falls campus that sealed the deal.

"I wanted to take this visit and I did. I just felt great about the track program and the coaches and atmosphere there. Cedar Fall is fantastic. Everybody is nice there.  It was a good fit for me."

At UNI, Brandon will be reunited with older brother Brion, a University of Nebraska football transfer. The younger Carnes is excited to have his brother by his side and knows it is going to be an awesome experience. Carnes finished third in both the 100 and 200 meter dash at the 4A state championship says he is looking forward to running both events along with the relays, and can't wait to start his career as a Panther.

"Northern Iowa is getting a gifted athlete whose going to do big things. My goals are to be the top sprinter, win our conference meet, and make it to NCAA Nationals as a true freshman."