Rain and wind and weather ambushed the early season tune up at Crescent Lake Park a year ago. It made scoring the meet next to impossible and half the meet never made it into the books. This year, weather closed in as the girls finished their race and struck as the boys race sent its first few runners across the finish. There was to be no stopping the result tabulation this year. In the face of a deluge, coaches and volunteers consolidated all the soaking score sheets and finished the meet complete with results. 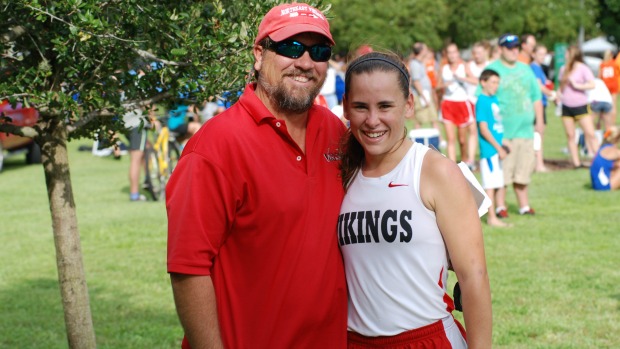 The girls from Seminole took the team title with 39 points. Junior Olivia Suski, who landed 37th last season at states, claimed third place in 20:31. Eliza Long and Miranda Gale grabbed the 6th and 7th spots while Megan Bayley and Maddie Stubbs claimed 11th and 12th respectively. Second place with 46 points was Osceola. The biggest scorer for Osceola was Kaley Eisenbrei, who finished second overall with a time of 20:28 just three seconds off the winning time. Coming in 8th and 9th respectively were Fatima Abu Ruman (21:52) and Tamara Boskovic (22:13). Katelynne Magin and Hannah Gonsalves claimed the 13th and 14th spots to round out the effort. Northeast finished third with 70 points but got the best individual effort from senior Caroline Condon. St.Pete’s Megan Fitzgerald led the way for the first mile stretching her lead over Eisenbrei to almost 10 seconds. Quickly into the second mile, Condon made her move and got in front of everyone but Eisenbrei.

“They started coming back and I know I’m not a great sprinter so I wanted to be comfortably out in front,” Condon said.

Condon accelerated on the last corner, coming into the last 800 meters, where she held on to win her second tournament this season. Condon knocked a full minute off her time from the Little Pirate Invitational a week ago. Officially, Condon won the race in 20:25. Condon credits her cross-training with the swim team for the early jump start she’s had for cross country. Teammate Hayley Brahm finished 5th in 21:34 and Caroline Krueges finished tenth. 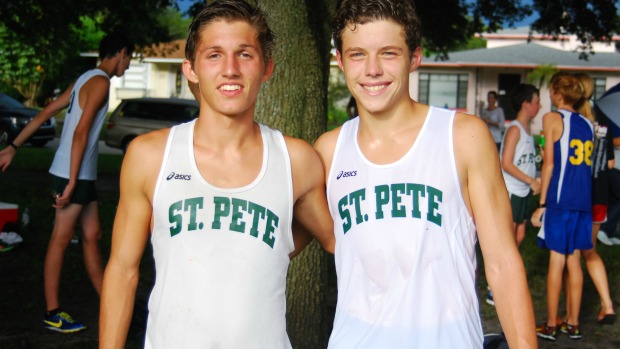 In the boys race, Osceola cruised to an easy victory with a score of 40. Hunter McCann (16:53) took second with teammate AJ Jimenez right behind him in third with a time of 16:56. Reggie Cape grabbed the 8th spot for Osceola in 17:36 and Ryan VanMiddlesworth and Trey Smith tied for 13th. Second, third and fourth place were separated by just one point. Northeast wound up second place with 64 points by virtue of their fifth runner. Seminole also scored 64 but had to settle for 3rd place. Host St. Pete was right behind with 65. Individually, the boys race belonged to senior Semmes Bruce who crushed his old personal record of 17:50 with a stout 16:41. Bruce and teammate Elliot Traxler hung together in the lead after the first mile. By the second mile, Osceola’s Hunter McCann had passed them. By the third mile, Traxler had simmered back and it was between McCann and Bruce who would take it.

“I wanted to stay with the first pack (in the early going),” Bruce said. “Then that last mile I just gave it my all.”

Bruce’s primary passion is soccer, being a three-year Varsity player for St. Pete High and a storied club player but Wednesday, Bruce was the star of Crescent Lake Park, eventually out-distancing McCann by 12 seconds.