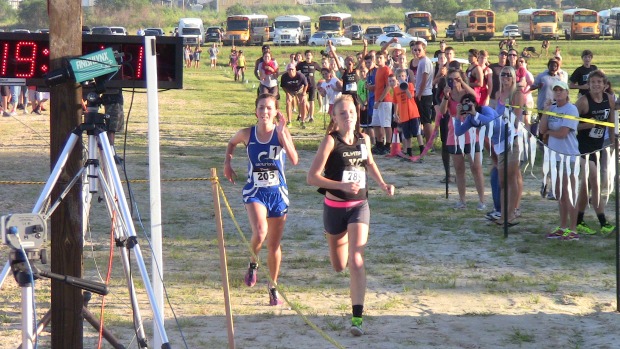 Rain, rain, go away. After a strong summer workout which consisted of logging miles, running hills, building a strong base, and attending Brevard Running Camp, Emily Headley was ready to start her junior season. However, mother nature ruined those plans. Headley and Olympia her teammates were set to run at the Trinity Prep Invitational, but nasty weather canceled the varsity races. The following week at the Edgewater Invitational, lightning bolts caused Coach Stacey Williams to have reservations about competing. Finally, Headley and the squad got their chance to run at the Mt. Dora Bible Invitational. Williams says everyone was rearing to go and her number one runner was no exception.

"Running at Bible takes a different mental perspective than at other courses. The athletes need to be prepared to compete for place not for time. Our team goals were to win the meet and her individual goal was to win. I knew Christina McKinney had ran in the 19’s and it was her home course, but Emily was ready for the competition. I wanted her to practice leading and racing on her own. She executed and made strong pushes on the hills and improved her time from last year."

Headley ran the MDB course as a freshman and posted the second fastest time ever at the meet of 19:53.88. Her time in 2013 was 20:37.28, but the junior still won the race by over 20 seconds. The following week provided another tough course. The Titan's star as well as many other competitors at the Jim Ryun Invitational described Holloway Park, as a "true cross country course." It was a different experience as well with the wave racing format. Instead of running with her teammates, it was an individual battle to the front. Coach Williams describes Headley as a true competitor during this race.

"I wanted Emily to take the lead by the half mile mark and run knowing she was being chased. Both Denae (Chapman) and Alex (Eaton) gave her some great competition and challenged her. This was a great opportunity for her to practice leading, I was very impressed with her commitment. When Denae passed her with 200 meters left she had to make a decision to compete and get herself back in the race. Our team continues to work on the mental moments during races when you can settle or you can push, and here Emily made her mind up to push."

Headley pushed Chapman and edged her out at the line in a new meet record time of 19:12.80. The mark bested that of Holy Trinity's Julie Wollrath time of 19:18.60 last year in the first meet at Holloway Park. The decision to run two tough courses in a row was part of the road to the ultimate goal; the state meet. Headley and the Titans will travel to Titusville this weekend for the Flrunners.com Invitational 14. Coach Williams says that with the tough tests, Emily will be ready to compete at the highest level in the state.

"She continues to improve different aspects of her race every year. Her character and discipline will carry her across the finish when her legs grow tired. She is a fighter as she proved last race, and I can’t wait to see the amazing athlete and person she continues to develop into. She has really stepped up to help lead this team and she leads by example." 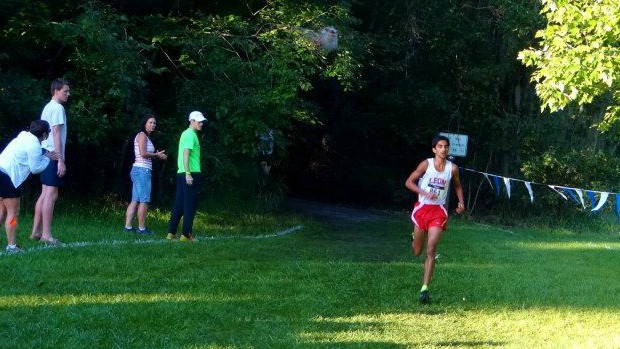 Leon junior Sukhi Khosla is off to a hot start in 2013. At the Godby Cougar XC Challenge Khosla went our easy the first miles, and hammered it home the last two. He coasted to victory in a time of 16:46.31. The time was 27 seconds faster than runner-up Griffin Rutherford of North Florida Christian, who finished fourth at last year's Cross Country Finals. Coach Andrew Wills then took the squad up to Carrolton, Georgia to competete against the Peach State's top runners. Khosla definitely didn't disappoint the Sunshine State faithful breaking sixteen minutes on a very difficult state meet course. His time of 15:53.65 is the 25th fastest time on that course according to our Georgia MileSplit database. Wills says it is 20-30 seconds faster than Khosla ran a year before.

"I thought that was a very good time, not too many guys have run sub 16 on that course in the early season. It was good to see that he had improved his time and that he won the race, after a runner-up finish the previous year."

What does Khosla do for an encore? How about re-write a course record and set the fastest mark in the state for 2013. The Leon star established his lead at the Alligator Lake XC Invitational early on. At the one mile mark, he had a five second lead over Nick Morken of Niceville, by the time he crossed the finish line in 15:08.62 that gap had widened even more. To put the win in perspective, Morken, the 3A state champion at 1600 meters was second twenty seconds back in 15:29.32. Thomas Howell, the 3A state champion at 3200 meters and reigning 3A Cross Country Finals state champion crossed the line in 15:31.45. Coach Wills says there was no specific game plan for the race. He wanted Sukhi to go out and race hard and see what he could do and adds that even though his 15:08 was a great performance, the season is still young.

"It's an early season race, we need to keep him healthy and fit so he can run that well in the post season races."

The Lions will take this week off and are still undecided if they will run at next week's Panhandle Championships before taking on the FSU Invitational/Pre-State at Apalachee Regional park. The goal for Khosla is to get in his required four races. Coach Wills says running fast at big meets every weekend would be great, but they want to be ready for districts, regionals, and states.

"That is the goal. We want to be ready for the state meet. That is the most important meet for Sukhi and his teammates."
Wills has seen a ton of talent come through the halls at Leon High School in Tallahassee. He says what makes Khosla such a great runner would be his natural talent, dedication, and work ethic.
"Sukhi works hard, trains consistently and has the desire to be great. He is up i there near the top of the list withs ome of the best I've coached. He still has two years left to build on his accomplishments, then I'll have a better idea. As of right now, he's running the kind of times that Matt Mizereck and Will Stanford were running during their careers at Leon."