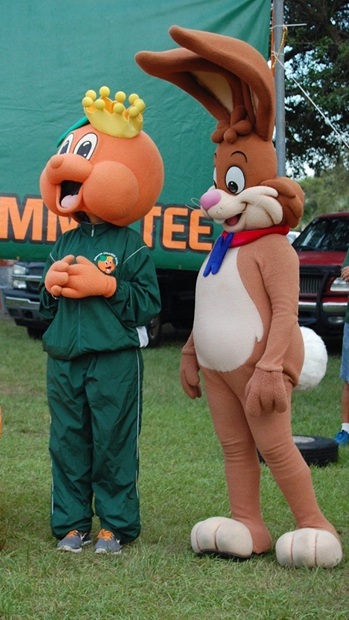 About the Meet:
The Junior Orange Bowl Invitational became a much larger affair for the 2013 cross country season as many event sponsors helped make this competition a better and more memorable experience for all of the participants. Various sponsors and vendors made their presence well known for this annual event held in Miami at Larry & Penny Thompson Park and after listening to the comments from the athletes and coaches throughout the meet, I could hear nothing but great things. Everything from the Junior Orange Bowl mascot JOBIE, to the Nesquik bunny, to the DJ spinning music at the Nike and SoleRUNNERS running store tents, the Junior Orange Bowl Queen and Princesses, along with plenty of bananas and oranges, and of course Smoothie King, the tone was set that this was going to be one of the best and most fun cross country events in South Florida. One could even argue the best we've ever seen in Miami, at least in the last 10-15 years that is.

The competition kicked off on Thursday afternoon for the Middle School races, while Friday was resevered for all of the High School kids. And after multiple bad weather days at the beginning of the week, the weather gods were kind and allowed for nearly perfect weather, at least in Miami, on Thursday and late Friday afternoon; earlier Friday afternoon during the junior varsity races the weather was its typical humid and steamy self. Once the races were all settled, the Junior Orange Bowl provided many great awards for all of the top finishing participants and teams. For all of the Middle School races the top 20 individuals were recognized with medallions and top three teams received trophies. For all of the High School races the top 20 individuals also received medallions, while the top three team trophies were presented in the two different varsity divisions. Besides that, every individual varsity race winner, for both MS and HS, brought home a championship plaque to go along with their medal. 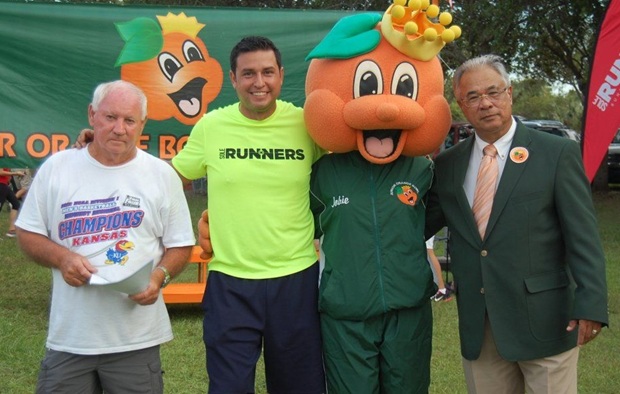 HS Junior Varsity Races Recap:
The junior varsity races both got stuck with the hottest weather of the entire two-day competition, but most of the athletes were able to perform at their best with all of the excitement and energy of the competition motivating them from beginning to end. While each winning junior varsity team started in different fashions, both squads brought home dominant performances over the rival teams. In the girls JV race the Barracudas from Coral Reef started off with a fast lead pack for the first mile with the Ferguson Falcon girls chasing a ways behind, but by the halfway mark of the course it appeared as if the Ferguson pack was making a move towards the front for good. When it was all said and done Ferguson placed five girls in the top six for the win. On the boys side a similar race emerged, this time with the JV boys from Columbus going out as the fast lead pack, and again with the Ferguson boys in pursuit, but in this race, the Explorers of Columbus were able to hold their quick pace for the entirety of the race. The Columbus boys did just as was done in the girls race, place five finishers in the top six, to help secure their JV team win. 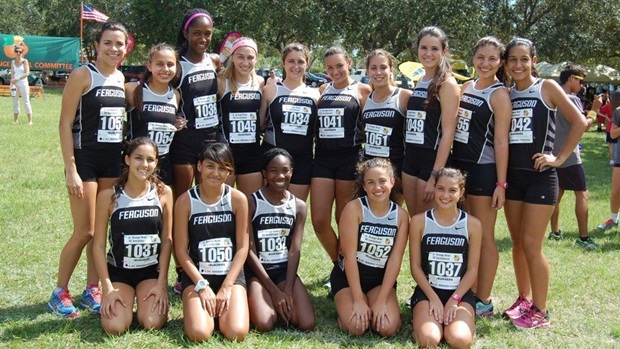 The Ferguson girls JV team before the start of the race. Individual winner, Claudia Bladino, is on the bottom left (#1031).

HS Girls Open Varsity Race Recap:
For the first time in history of Junior Orange Bowl Cross Country Invitational two different varsity divisions were being raced thus allowing many school and athletes an opportunity to bring home some hardware that might not normally in a large invitational that hosts over 40 schools from all over South Florida. In the girls Open Varsity division you had 19 schools competing, including a couple of B-team varsities, along with some fast individual competition up front. Bringing home the win individually, by over 45 seconds, for this girl's contest was Daesha Rogers of Miami Jackson. It was unsure if Miami Jackson would even attend this contest as they had also been signed up for the South Fork Invitational, but they jogged up to the starting line less than a minute before the race was to begin. Side note: although schools and coaches were notified that individual athletes could bump up from the Open Varsity race into the Invitational Varsity race, there was no request made for any female athletes to do so.

In the team race, there was a tight battle between two schools which was evident from very early on in the race. Miami Central had a strong group of four girls in the top eight of the race as they came through the mile mark, with a five pack of Ferguson runners running a ways behind the lead group and barely ahead of the fifth girl from Central. Even by the halfway mark of the course, while the top two girls from Ferguson slowly started working their way up and the Central lead athlete had fallen back to third place within her own squad, it was unsure what the outcome of the race would be. As the athletes came into the chute Central appeared to have the win at first beating Ferguson on the 1-2-3 runners, but when the Falcons put their 4-5 inside of the Central #4, that just about secured the win, but by a mere two points. It was a tense moment during the awards presentation right before the Ferguson junior varsity girls, racing as a B-team varsity, found out they had actually pulled off the victory. Great job, ladies! 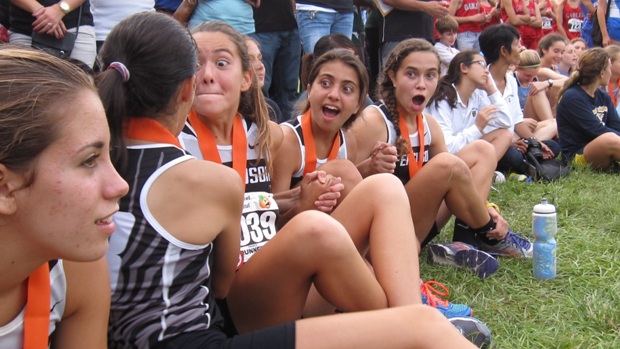 The faces of excitement as the Ferguson girls B-team varsity realizes they just won the Open Varsity team championship. 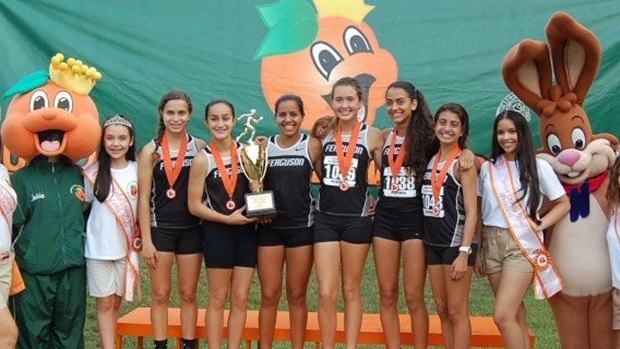 The Ferguson girls B-team varsity on the awards podium after the surprise of their Open Varsity team win.

HS Boys Open Varsity Race Recap:
For the boys Open Varsity race, the competition wasn't as nail-bitingly close as in the girls Open Varsity race, but for a while there it was unclear as to which team might bring home the championship trophy. Individually Tristan Enriquez of American HS ran away from his competitors to win by a margin of seven seconds, and as his team was coming in it appeared they had the easy team win until you realized that their fifth was just a bit too far back to know for sure if they had gotten the victory. While American had a strong first four runners, the gap from four to five was over a minute which seemingly allowed the athletes from Homestead to try and pick up the win. Unfortunately for the Broncos, the top four Patriots from American were just too much to handle coming down the stretch as they placed four runners inside Homestead's number two runner. Once that happens, it becomes very difficult to edge out a victory, even if your opponent has a far back fifth runner. 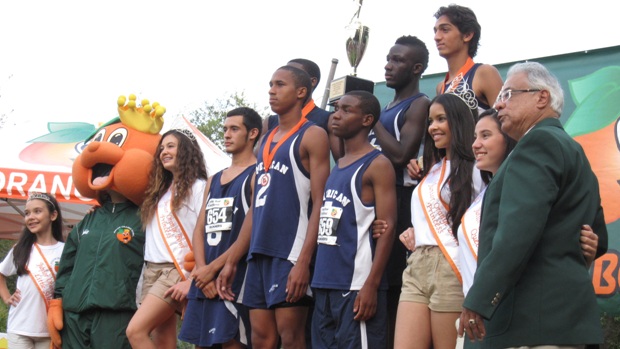 The  team champions from American HS who won the boys Open Varsity race.

HS Girls Invitational Varsity Race Recap:
The girls Invitational Varsity race, breakdown wise, was extremely similar to the boys Open Varsity race. The individual winner came from the championship team, in this case Katrina Santiago of Ferguson who won by a ten second margin, and the winning team had a strong four runners, but over a minute gap until the number five. But once again, when a team is able to place four girls inside another team's top two finishers, and four in the top seven overall, it becomes very difficult to try and pull off the upset. So when it was all said and done the Ferguson varsity girls brought home their fourth consecutive Junior Orange Bowl Championship, while the Bobcats of Lourdes came home with runner-up honors by a good margin over third place Westminster Christian. Individually this marks the fourth win on the season for the senior from Ferguson who is currently ranked third in classification 4A after her race this past weekend at the flrunners.com Invitational in Titusville. 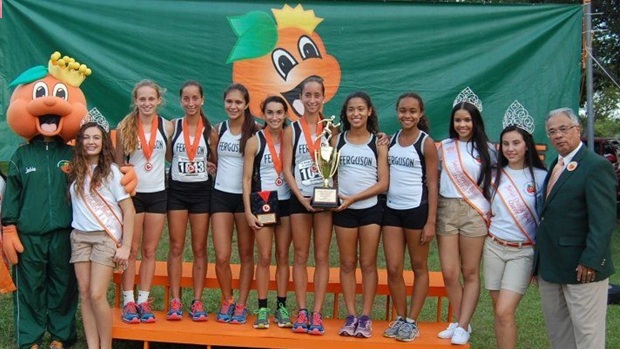 The Ferguson girls Invitational Varsity race champions on the podium with JOBIE, Dr. Bueso, and the Junior Orange Bowl royalty for 2013.

HS Boys Invitational Varsity Race Recap:
For the boys Invitational Varsity race, for those that are familiar with South Florida running, the results for the individual champion and top placing teams basically fell into place as they have throughout the last few weeks of competitions. Noticeably missing from this competition was Belen Jesuit, who went to go race at Great American, and Coral Reef HS who took this week off from racing. Individually your meet winner was junior Nick Diaz of Miami Sunset, who was currently fresh off his major victory at the flrunners.com Invitational, and he brought home his fifth straight win of the season as he lead his squad to the championship podium. Overall the Sunset squad placed four boys in the top five to win in a dominating fashion over a nicely packed Christopher Columbus team which was being chased by athletes from Ferguson and Ransom Everglades. This marks Sunset's second win of the season as they won the 4A division of the Spanish River Invitational a couple of weeks ago. 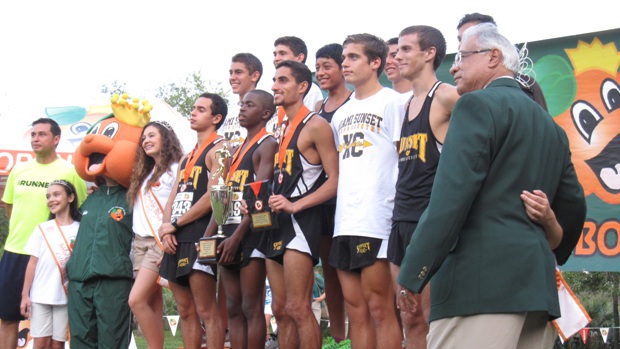