An anticipated matchup between Lyman and Buchholz in the boys’ race never materialized on Saturday as only one Greyhound, Cameron McCutcheon, made it to the starting line. The Bobcats steamrolled the field placing five in the top eight to score 28 points and win by 44 points. Though none of the Bobcats ran personal bests on the muggy morning, they used a 22 second spread between their top runners to secure the victory.

“We ran well on the boys’ side,” said a content Bobcat Head Coach Ron Norris who has staged this meet for 35 years- 22 while at Newberry and 13 while at Buchholz. “We were happy with the win.” 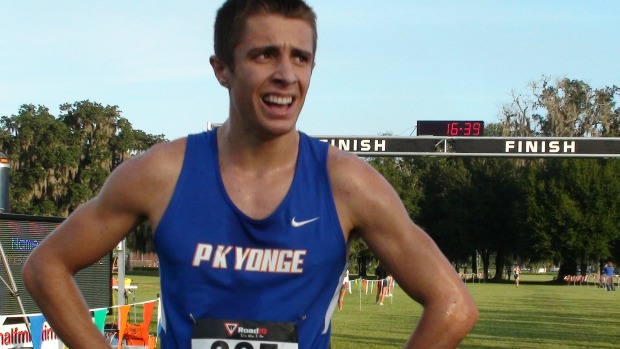 The individual race went to script as PK Yonge senior Joe Janson took the lead early and by the mile (5:01) and went on to win in a time of 16:25. His 11 second gap at the mile only grew by the second mile in 10:27(5:26) over a hard running Gainesville High sophomore Blake Lowery .

“I usually try to hit the first mile right around 5:00,” said Janson who plans to go on mission trip after his senior year. “It felt good, but this is a tough course.”

After a few fast courses over the past two weekends at Alligator City and flrunners.com Invitational 14, the Sante Fe College course was definitely a change of pace.

“It is not as flat as the other courses, “said Janson. “ It has those hills and there are some sandy spots.”

“We have been working those hills and trying to get better,” said Coach Norris. “Hopefully, with the districts and region meets here, we’ll be in good shape.” 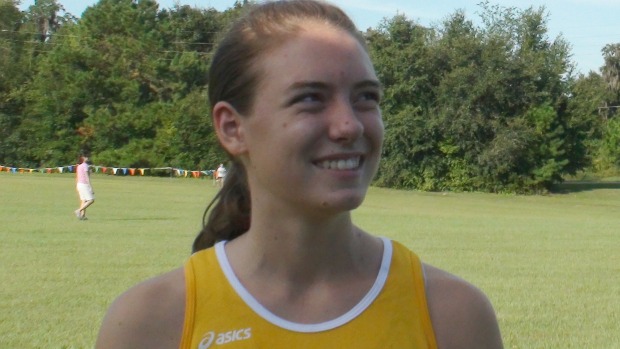 The girl’s race went to plan for the individuals. Buchholz Bobcat teammates Sarah Edens and Isabella Whelan took it out in a solid 6:01pace and were never headed going 1-2 for the Bobcats.

“We [and teammate Whelan] try to push each other to get better times,” said a soft spoken Edens who finished first in a time of 20:13. “It was pretty hot out there.”

Edens was 31st last year in 22:36 and has improved nearly three minutes since then.

“My father though I should run so I came out [last year]. This is the first summer I ran. I was surprised at how fast I ran in my first race [Bobcat Jamboree],” said Edens.

Buchholz’s top two punch was not enough to defeat Spruce Creek High School. The Hawks donned the “S” tank tops, Coach Stephon Gallons’ idea [He’s a big fan], as they knocked off the Bobcats by six points for the team title- 66-72.

“I told Skylar [Stolte] that she was running varsity this week and that proved to be the difference,” said a smiling Coach ‘Step,’ whose roster boasts 102 athletes. The Hawks placed five in the top 24 to the Bobcats’s four.

“We are really happy that we won. I wasn’t sure if we had.”

Overall though, the meet went off without any hitches.

“I’ve been doing this for 35 years,” said Norris. “It’s a great course and we run a great meet. We have district and regions here and the teams that came got a chance to see the course.”

“I wanted our kids to have a chance to run on the course,” agreed Gallon. “I think it will help us at regions.”