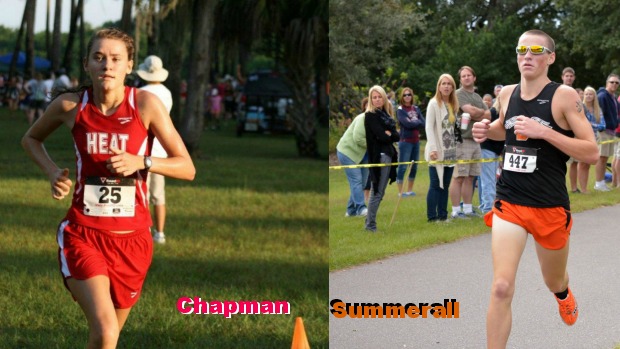 When Emily Chapman was three years old she was diagnosed with Autism. Her mom, Cathy who is in her first year as a coach of her daughter's Brevard HEAT squad, didn't even think they'd be able to have a normal relationship. Bring in Dr. Jerry Kartzinel, and mom says through his treatment and the hand of God, change for the better occurred. Fast forward to 2013. It hasn't been easy, but Chapman is a healthy teenager with a passion for running; a sport she has been successful at.
"It has been a long and at times very difficult road. Em has been on a special casein free/ gluten free diet (simply dairy free and wheat free) that has made it difficult to get protein and enough carbs in her, but I have seen God do amazing things in her life and for whatever reason, made her love to run and made her fast. I can't wait to see what lies ahead.
Two weeks. That is the amount of time Emily Chapman had to relax after the state track meet. As mid May approached it was back to work for the Brevard HEAT junior, Back to training six days a week (she doesn't like training on Sundays), and building up the base for cross country. Emily carried on that routine for roughly eight weeks before the focus shifted to speed workouts; mission faster turnover and greater endurance.
"Mondays are long run day at the causeway (we get our hill work in as well, running over the bridge), Tuesdays and Thursdays are speed work days, This includes: reverse ladder, mile repeats, 1/2 mile repeats, 1/4s, and 200's, 20/40, 60/60. We usually alternate a harder workout on Tuesdays and a shorter (easier) one on Thursdays...Wednesdays and Fridays are easy run days and Saturdays in season of course mean race days. We also throw some core work in a few days a week."
So far the training has paid dividends. Chapman has won four meets on the year, finished 15th at the flrunners.com Invitational Race of Champions, and 25th at Pre-State. Coach Chapman says it really has been an amazingly fun year for both her and her daughter.
"We have dealt with injuries in the past and this year has been injury free and it has been great watching her excel. All glory to God!"
Recently, the Brevard HEAT standout had another great race at the Holy Trinity Fall Classic winning in a personal best time of 18:41.39. Despite, some competitors from Holy Trinity and Denae Chapman of Circle Christian not being in attendance, the goal was to run a complete race, and try to come out on top. Coach Chapman says she was surprised at the quality workout she got from running against Lauren Archer of Ransom Everglades.
The 1A virtual meet predicts Chapman to finish eighth at the Cross Country Finals two weeks away. There is no strategy for the meet; just go out and run. The junior has traditionally let the others set the pace and steadily catches up. Sometimes it works for her, other times it doesn't. Being Autistic she began life two to three years delayed developmentally. Her mom says she has had to develop emotionally and mature in her running wisdom and believes she is capable of so much more.
"All things come to those who wait and we are starting to see the rewards of patience and a steady, solid work plan that provides all she needs for nutrition, rest and balanced workouts. The goal is to run fast and hopefully win. This has definitely been her best year and only God knows what is ahead."

The Sarasota boys cross country team is enjoying one of the best seasons in a while and a large part of it is thanks to Zackery Summerall. As a sophomore Summerall finished 12th in the 800 and 4th in the 1600 meters at the outdoor state championship. This summer, (the first he says he trained consistenly) focused on lsd and tempo runs followed by the team's annual camp which was held in North Georgia. One lesson he learned on the trip was racing toughness. What coach Kyle Mendenhal thought would be a ten mile run quickly turned into a fourteen miler after the team got "lost" to put it lightly.

That grit and never quit attitude has worked well for Summerall this season. He kicked off the season with a win at the Bradenton Runners Club Invitational, finished second at the North Port Invitational and finished in both the top eight at the flrunners.com Race of Champions and Pre-State in Tallahassee. He told me after the race that the pace got out fast, but after the first mile he began to mentally zone in. It showed him that he could compete with the best runners in arguably the most difficult class, 3A. Coach Mendenhal believes his form is another difference between this year and last.

"His form has become much more fluid particularly upper motion from last year."

Sarasota currently sits as the fifth best team in the state according to the 3A virtual meet. The Sailors won the inaugural Tri-County Championships with Summerall guiding the ship. His time of 16:09.40 was off of his personal best, but still thirteen seconds faster than sophomore teammate Adam Bradtmueller. The team win was even sweeter because it came over rival. Sarasota Riverview. Mendenhall was very pleased with both the individual and team efforts.

"It was an honor to win and a well run event, but we ran it on dead legs. No expectations. We went in after a hard week and the boys gutted it out. I am very proud of them!"

Not to be outdone, Summerall picked up a second win Thursday at the district meet. Teammate Bradtmueller was second and once again the Sailors pulled out a team win. Mendenhall says he is proud to coach such a great team and sees his junior's leadership positively effecting the rest of the guys.

"Zack and the rest are some of the funniest kids I have worked with. They appear serious prior and during a race, but the rest of the time they are plotting the next way to mess with the coaches or each other. Zack leads through his work ethic hich is already effecting my freshman five and six runners."

With the state meet two weeks away Mendenhall won't divulge workout secrets, tips, goals, etc. Coach will tell us the workouts are tough and that today the topic of conversation fixated on "WHO" he'd have to buy lunch for.

"They will run until they bleed if it is for some Five Guys."

No matter what the meal is, with Summerall leading the way for the Sailors, Coach Mendenhall, better be saving his change from now until November 9th.