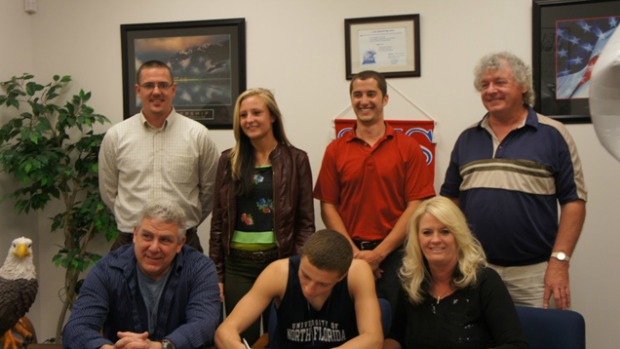 Springstead senior Bobby Harris didn't sign on National Signing Day, but the extra time allowed him to find the perfect fit. One of the state's top high jumpers decided to stay in state and join a stellar all-around recreuiting class at the University of North Florida.
How did you get started in track and field?
When I was in middle school I was on the track team as a high jumper, but I wasn't that good. When high school started I did not want to join the track team. It was my dad who insisted on it and would not allow me to quit. My freshmen year my PR was only 5'10". The first day of track practice in my sophomore year I jumped 6'4". I was as shocked as anyone.
What was the recruiting process like for you?
The recruiting process was interesting, I met so many coaches and athletes. Some of the schools were amazing. I visited USF, UNF and South Alabama. I had others on my list such as Wingate (North Carolina) and UF called me too. However, UNF's school was beautiful and the coaches made me feel welcome and that I could make a difference on their team.
What other factors went into your decision to be an Osprey?
Coach Krupa really was the one who sold me on UNF. He always seemed interested and cared about what I was doing and not just track. Even after my official visit, if I had any questions he would answer my emails immediately. Coach Krupa and Coach Pigg seem very organized and that impressed me. Also UNF has one of the best track facilities and they seem to be concentrating on recruiting a winning team .UNF also had offered what I wanted to study which is Biomedical Science and then I hope to move forward to pharmacy graduate school.
How important was it to stay in-state?
It played a part in my decision but it wasn't the deciding  factor, obviously since USF is closer than UNF. I think I ruled out some of the northern school because I hate the cold weather. I am very comfortable with my decision and look forward to training with coach Krupa and hopefully bring some kind of championship to UNF.
What kind of jumper is UNF getting in Bobby Harris?
They are probably getting the hardest working jumper in the area. High jumping didn't just come to me. I had to work at my form, steps, and approach. To some kids it just comes natural, but I have to work at it everyday.
In 2012, you were second in 3A as a sophomore. In 2013, you won the state championship. What are your goals for 2014 and beyond?
This year I hope to be on top of that podium once again. I would really like to break Hernando County's 6'10" record at minimum and my ultimate goal is 7'. I am looking forward to stiffer competition. Competiton pushes me and I always seem to do better under pressure. The meets where I win with one jump, just isn't fun. Another reason I chose UNF was Coach Krupa has a great training program to help me reach those higher heights.