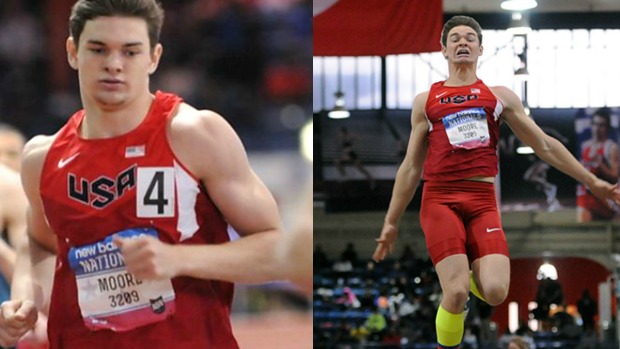 Freeport High School senior Gabe Moore showed his versatility this weekend in New York winning the pentathlon with 4,054 points, over 100 points more than runner-up Jack Lint of Ohio. Moore picked up his most points (920) in the 60 meter hurdles where he placed third with a personal best time of 8.25. He won the long jump with a very impressive mark of 23-05.50 besting his previous best by nine inches and also placed first in the shot put with a throw of 49-00.25. His 6-05.50 in the high jump was second best of the group and a half an inch off his best of 6-06.

Moore, who claimed his first national title ever, says he probably works on two to three events everyday then does a running workout and lifts weights. He has signed with the University of Arkansas where he will compete in the decathlon at the next level. See what Gabe had to say after winning in this interview!


North Florida Christian senior and University of Florida signee Darrielle McQueen (pictured below)was runner-up in the girl's triple jump. McQueen leaped a personal best 41-3.75 to claim the silver behind champion Keturah Ori of New Jersey. As a junior, she went undefeated winning  both the triple and long jump earning the fifth and sixth titles of her career. She won the triple jump in 2012, both events in 2011, and the triple jump in 2010. She has two outdoor titles to her name winning the New Balance National Championship in the triple jump in both 2012 and 2010. 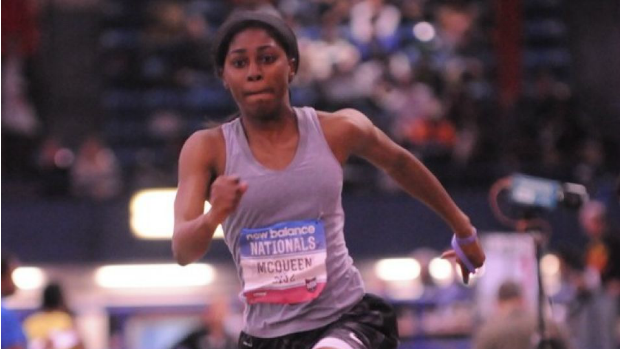 Royal Palm Beach freshman Karimah Davis (pictured below) showed why she is one of the brightest stars in the class of 2017. Running for Fast Lane Track Club, Davis finished 9th in the freshman 60 meter dash (8.07) and runner-up in the freshman 400m dash with a new personal best time of 57.13. Winner Destiny Ward of Chesapeake, Virginia set a new meet record with a 55.85 clocking. 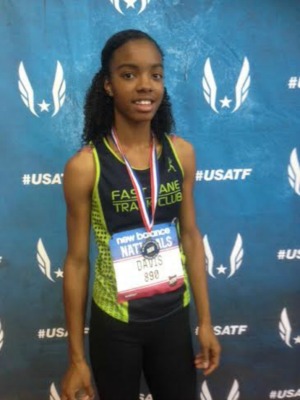 Holy Trinity seniors Daryth and Gaby Gayles also made the trip to the Big Apple. Gaby posted the 15th fastest times in the championship 200 meter dash with a 24.68, but did not make the finals. She also competed in the 400 meter dash, her specialty, and clocked a 55.17, the fifth fastest time of the day to advance to the finals. She finished fourth in the finals, but was DQ'ed following the race due to a break line violation. Sister Daryth, just missed out on the finals of the long jump after leaping 18-06.50 on her third and final attempt. She also competed in the 60m dash where she had the 20th fastest time in the opening round of 7.69. Both Gayles will attend Stanford University in the fall.
Ponte Vedra High School athletes Sean O'Linn, a mid-distance specialist, and state champion high jumper Nicole Greene were slated to compete, but due to a change in the event schedule, missed their events. No worries though, we will definitely see them at the state championships and possible New Balance Nationals Outdoor this summer in North Carolina.