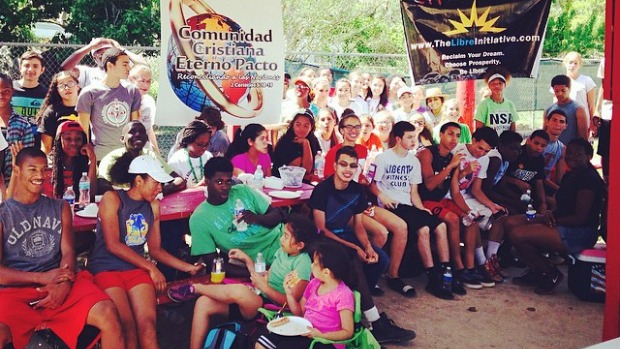 Spring break is a time that most high school students spend goofing off with friends, headed to the beach, and generally trying to avoid anything resembling work. However, for students at Colonial High--including some 30 track & field athletes--they saw it as the perfect opportunity to give back to their local community.

"We had around 80 (students volunteer) in total, with about 30 being track kids," explained Rene "Coach P" Plasencia (who last year ran for the the State House Of Representatives), 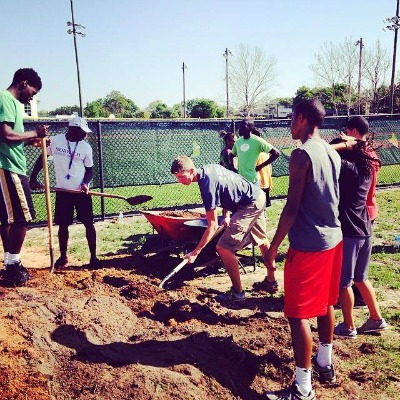 "the kids painted all the dugouts, cleaned up garbage, and filled in low-lying areas with clay and dirt to prevent the build-up of standing water when it rains."

The Azalea Park little league complex is less than a mile from Colonial High School, in a neighboorhood where a lot of the students live and play. Coach P was alerted to the deterioration of the park about three weeks ago with an article in the local paper and local television news. Upon mentioning it to his athletes, they did not  hesitate to devote their time and energy to doing something positive to help. Park officials said a major need was to have the dugouts repainted. While they were once covered in beautiful freshly painted murals, including hispanic baseball hall of famer Roberto Clemente, the paint now peeled off on the parts not covered with graffiti from vandals.

"I am a big believer in changing your community from within," said the state champion coach, "I don't think I can change the world, but I know that I can change the direction of a life and together we can change our block... from there maybe we can positively impact our district."

Plasencia was not at all surprised by the enthusiastic response from the student-athletes at Colonial. Under his guidance, the school has built a culture of outreach over the years.

"I knew most of my kids would be excited to volunteer on their first day of spring break. They truly enjoy helping others. The neat thing is that most of my kids don't come from homes that have much, so their time and sweat is all they can give. I try to teach them that no amount of money can ever compare to their own time and sacrifice."

In addition to the cross country/track & field team, another 50 kids including a large group of girls softball athletes contributed to the effort. That sacrifice of their precious spring vacation time will make a lasting impact for lots of young kids who can walk a little straighter and take a little more pride in their community. But that impact is not limited to the receivers of their labor; the laborers themselves are forever changed too. Coach P knows the community activism and volunteering at a young age is something that stays with the youth as they become adults. It impacts who they become and instills a certain compassion and willingness to serve later in life.

"After so many years of doing this at the same school, it's cool to see how many graduates come back to help out the kids I have now," he said smiling as if a proud parent, "it's not uncommon for a former athlete to come by and drop off a pair of spikes just in case someone needs them or an SAT prep book. Some of them continue to volunteer with us. I have parents whose kids graduated 6 years ago and former students who still volunteer."

Who says this generation is indifferent and selfish? Certainly not these Colonial Grenadiers!