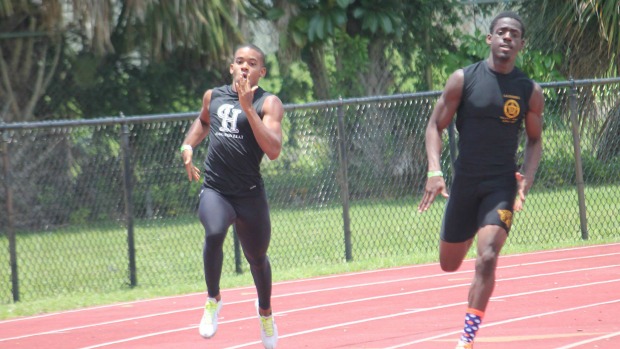 I don’t think I’ve seen this big of a transformation in an athlete in such a short amount of time before ever in my life. This young man has totally shown the competition this year that he is to be taken seriously, and that he’ll take on any challengers. His personal bests are 10.49 and 21.40, and so far he’s gone the whole season undefeated and plans to keep his streak going. He is ranked 4th in the 200m and 3rd in the 100m in all of 4A, so I know his state meet is going to look promising. Last year he was known as the odd man out at state, as he got 9th in the 200m. He is honestly an athlete that is pure evidence of what putting in that extra work can do for you. Who is Andre Ewers?

Andre Ewers is a senior at Piper High School, who is definitely making his mark in South Florida. His first years of high school track were a little shaky, as his freshman year he came into the season in the middle of January, and his sophomore season he was having a little trouble with grades. Ewers’ junior year was basically his first year truly experiencing everything high school track has to offer. When running in his respective events he was lost in the shadows of the seniors, struggling to fine his best way to shine. People honestly began to see his talent later that year when Andre was a leg on the 4x400m relay team that beat Boyd Anderson in the BCAA North Qualifier. 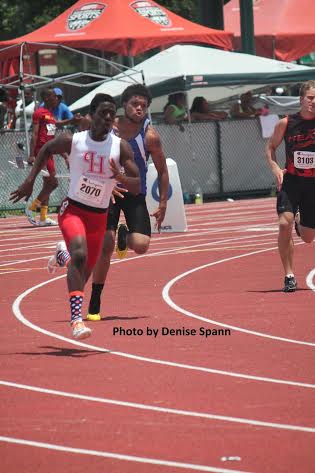 It was then where people saw there was true talent that could not be ignored.
This year Andre’s apparent goal was to win from the start. When speaking on his goals he mentioned that his goals “were to make a name for myself and get recognized. I wanted to run a 10.4 and 21.1 in the 200m. I wanted people to have as much faith in me as much as I have faith in myself. I wanted to win championships, invitationals, I wanted it all.” Obviously going into this season Andre was very hungry for success, and would do anything to make sure he was a position to be successful. As mostly every track athlete starts training long before the season starts,
Andre took a different approach that not many sprinters have the courage to do. This season Andre ran cross country to improve his endurance, as well as beach and hill workouts. Ewers says, “I took my training to a higher level, different workouts to challenge my body and improve my weaknesses.” As Piper runs in their district meet on the 16th, Andre is pretty confident that he will accomplish all that needs to be done.
As states are less than a month away, it’s coming down to the wire. Since Andre is ranked 3rd and 4th, I asked him who he thought his biggest competition was going into the big meet. He said, the sophomore speedster, Amir Rasul of Columbus. The sophomore is ranked #2 in the 100m with a time of 10.47, behind Terry Jernigan of East Ridge who has run 10.35. In the 200m, Rasul is ranked #1 with a time of 21.12 which he ran at the USATF US Area Youth Olympic Selection Trials a little more than a week ago.
As this big meet approaches, Andre has his work cut out for him in order to keep this winning going. Andre is known for the 100m and 200m, I asked him which one was his favorite and he said the 200m because it’s a fun race that has to deal with a lot of power. Andre’s start is also more aggressive, and he says he’s more confident in the 200m. “In that race it’s like I let the rage build up inside of me and let it out when the gun goes off.” Andre also adds, “I’m a good curve runner so that gives me an advantage in the 200m. My motto is execute the curve and damage the straight away.”
During the summer Andre plans to run summer track with Plantation H.E.A.T to run a few meets that will give him so more exposure and get him ready for college. So far University of Miami, Allen College, UNC and Barton Community College are interested in Andre, but I’m surprised there aren’t more as he is really running this season! As we talked about college I asked him if he thinks he is prepared for the college stage he replied, “As of now I’m still progressing, by the end of the year I will be ready.”
Ewers looks up to one person in particular and that is UF’s 400m phenom, Arman Hall. He looks up to Gino because he trains hard, he’s a good athletes and he leaves it all on the track. “He accomplishes things that most high level athletes don’t do in high school and college.” Andre’s favorite moments of the season so far are the Miramar Invitational and BCAA Championship Finals for both the 100m and 200m finals.
Andre Ewers is one of the hungriest kids to ever step to the line. He is definitely going to continue to shock us as the state series gets down to the wire that’s exactly why he is ‘Under the Radar’.