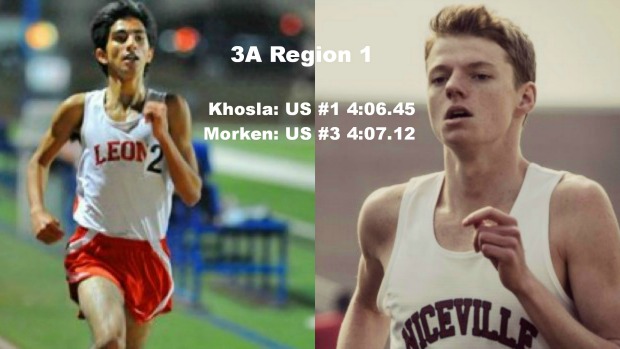 Leon junior Sukhi Khosla and Niceville senior Nick Morken proved they are worthy of being mentioned with the nation's top 1600 meter runners. Duking it out at the 3A Region 1 Championships both runners saw new personal bests as they crossed the line in 4:06.45 and 4:07.12, the first and third fastest times in the country for 2014.

Sukhi Khosla On The Race:

I didn't have too much of a plan coming in. When the gun went off the conditions were much more ideal than I expected so I just wanted to take advantage of the situation. Nick really pushed me because I knew his kick would be there unless the pace was really hot so he mostly mentally pushed me to burn the 3rd lap. I knew 4:06 was either number one or two in the country so I just was waiting for the milliseconds, but I was honestly not expecting to be able to run that fast this season."

"This doesn't put added pressure on me for next week. I actually feel more comfortable about next week knowing that I'll have closer to three hours between races instead of 85 minutes. I wouldn't necessarily see this race as a statement, but I see it as a display of all the hard work we've done to get to where I am, and how much a coach can change a person. This PR makes it 30 seconds in just two years. Being one of the best in the country is just another perk that comes along with it." (Special shoutout to Erin Dewey)

Nick Morken On The Race:

"Sukhi took it out hard from the gun. I think he wants to get into the Dream Mile so he made it an honest pace. The plan was to just qualify for state, but as he race progressed I saw that I could hit a solid time. I wanted to get the school record which was 4:09 and I did that. State should be an awesome race for the spectators. For the competitors, it is gonna hurt a lot. I'm looking forward to running on my future home track."

According to the flrunners.com database Khosla's time is the sixth fastest all-time, while Morken's ranks ninth. Flagler Palm Coast's Sammy Vasquez has the fastest time ever recorded by a Floridian with a 4:02.46 converted that he ran in 2005 at the Adidas Outdoor Championships.

The top twenty are listed below. (See complete list)

After winning the 3A Cross Country Finals, Khosla kicked off the 2014 season with a 4:13.03 personal best to win the Bolles Bulldog Classic. Coach Andrew Wills wanted to keep his stud runner healthy so he only ran one other meet before the start of the postseason. Last week at districts he cruised to a time of 4:17.63 and set another personal best after his time at regionals. Khosla also went onto win the 3200m in a very impressive time of 9:10.96. His 8:59.50 set at the FSU Relays is the top in Florida and 21st best in the country.

For Morken, the US#3 time comes on his fifth meet of the year. He split 62.6, 61.8, 62.3 and 60.4. Talk about consisitent. In addition to his regional runner-up finish, he also anchored the Niceville 4x800m relay and split 1:54. Last week, the UNF signee took home the 3A District 2 crown in a time of 4:21.61 a week after setting a personal best time of 4:15.82 at the FSU Relays where he was second. He is the reigning 3A state champion in the 1600 meters so a rematch with Khosla on his future home track should make for an incredible race!