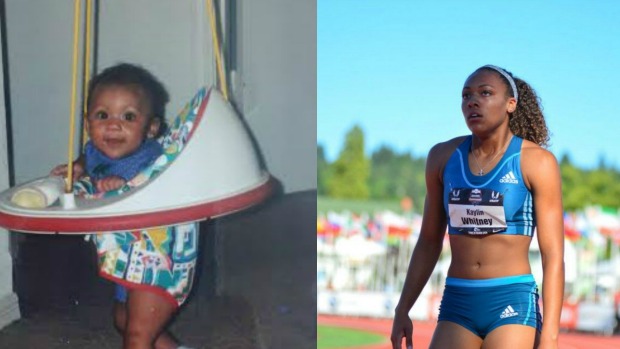 Two years old. Most babies are playing with blocks, but not Kaylin Whitney. She was preparing her legs for block starts. The explosiveness and power in the top high school sprinter in the country came from what else; a Jolly Jumper. An internet search shows an image for the toy which looks like  a trampoline for tots. Whitney says she was always in the Jolly Jumper and remembers those days fondly.

"I was always in that thing. It would hang from the door frame and that was the only way my mom would get me to behave."
The Jolly Jumper was just the beginning. While living with her maternal grandmother Michele Sites-Rhein she would run down the hallway, jump onto one couch, then to the next, and finally into the chair. Her feet didn't touch the ground. 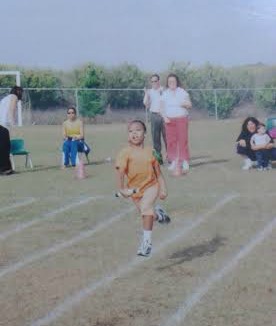 At age five Whitney was schooling kids on the playground. Sites-Rhein says by then she was already competitive and winning school races.
"We knew she was super talented at her kindergarten end of the year field day. While her peers were playing with Barbies or any other kind of dolls, Kaylin was climbing on things, going on slides, etc. She would rather be active."
Active was an understatement as the young Whitney continued to grow. Her mother, Kerrie Dworetsky, worked at a local tourist spot and would always see parents with leashes on their toddlers. Dworetsky always wondered what type of parent couldn't control their kids and said to herself she would never be put in that mold.
"As a few months went on, every moment at a store, in a parking lot, even at home, Kaylin would just look in a direction and RUN! I would really have to have one hand on her and the other on everything else I was dealing with. Even when I just had to close the trunk of my car, in a split second I would have to drop everything and chase after her. When I caught her she would just giggle."
Kaylin's breakaway speed was unleashed. Now you see me, now you don't. However, on a trip to New York City to visit her brother Dworetsky thought she would outsmart her daughter. She went into CVS, bought a hand-to-hand rope for her and Whitney to stay connected to each other, figuring it's not a leash, just wrist to wrist.
"I had a lot of bags and my purse on her stroller with her walking beside me. She started to walk away from me when I stopped and went as far as the cord would stretch. I just watched to see how she would react to not being able to go any further. When it stopped, she turned around, looked into my eyes, grabbed the wristband and un-hooked it, gave me a real quick "hahaha" smile and turned around and was GONE!"
Whitney had ran away from her mom for the time being leaving her to drop the stroller, the purse, and the bags inside to catch her.

At age twelve she joined the training group of Olympians Dennis Mitchell and Damu Cherry Mitchell. Running along side professional athletes like Justin Gatlin on a daily basis, Whitney quickly honed her craft and was becoming a "special talent." As a 14 year old eighth grader Whitney not only broke USATF Junior Olympics youth records set by Sanya Richards-Ross, she was shattering them, clocking times of 11.59 for 100 meters and 23.41 for 200 meters.

These days her daughter still can't be caught. Not by mom and not by most of her competitors in the United States. As a freshman at East Ridge High School in Clermont, Florida she lived up to the hype not losing a single race in either the 100 or 200 meter dash and picking up the first two state championship titles of her young career. The sixteen year old, who recently passed her driving test and received her license, has lost only two times in 2014. The sophomore won her third and fourth state championships (100/200m) and followed that up with postseason wins at the Dream 100 in New York City, Brooks PR Invitational in Seattle, and comes into this week's World Junior Championships fresh off the best performance of her young career.
Whitney put on a show for fans at USATF Junior Nationals two weeks ago clocking World Junior leading times in both the 100 and 200 meter dashes. Her 11.10 100 meter mark is the fastest ever ran by a high school athlete and her 22.49 200 meter dash ranks #2 all-conditions behind only Olympian Allyson Felix's 22.11 set at altitude in Mexico City in 2003.
This week she returns to historic Hayward Field at the University of Oregon, as the favorite in the 100 and 200 meter dash, against the best the world has to offer. Now, when you watch you will now know where that power, explosiveness, and breakaway speed came from. Yes, training will get you there, but starting early never hurts.