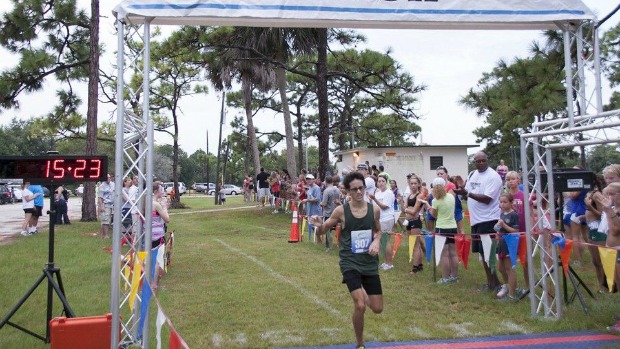 Brandon Marquez (pictured above) called his 2014 season opener at the Wickham Park Jamboree a "rust buster". Marquez, a junior at Timber Creek who has decided to compete this season unattached, definitely didn't have any rust this weekend. The 2012 4A Cross Country Finals runner-up sprinted out to the front of the group and never looked back, dismantling the field in a new meet record of 15:23 and posting the fourth fastest time in the country (tie with Levi Thornett of Alaska).

His time broke the existing record set by former Melbourne standout and Duke University runner B,rian Atkinson set in 2007. Atkinson was a three time cross country state championship in his high school career as well as a Foot Locker National Finalist.Although he won't be able to compete for a high school state title since opting to run on his own, Marqu ez has his sights set on bigger things. He says the race was a good start and great indicator of where he wants to head. That place is Foot Locker Nationals in San Diego. In 2012, he was 40th at Foot Locker South, but this year he hopes to land in the top ten and punch his ticket to compete with the 40 best boys cross country runners in the country. 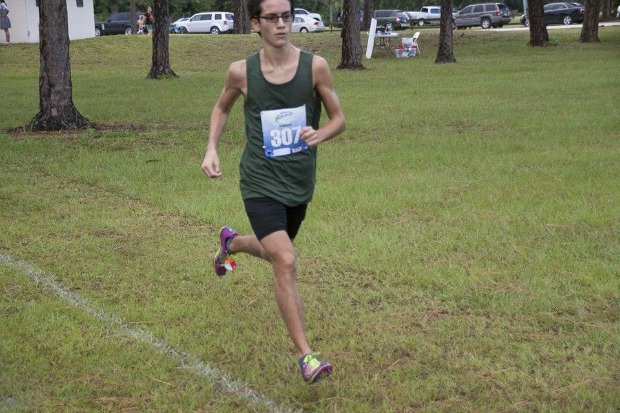 Behind Marquez, two of the host school's top runners were duking it out. Andrew Cacciatore, the 1A Cross Country Finals runner-up in 2013 and sophomore teammate Trevor Kattenberg. Cacciatore passed the youngster in the final meters winning in a time of 15:50 with Kattenberg coming in at 15:52. Despite the course being a bit muddy, their times were both the second fastest either has run in their careers. Garrett Camps of Melbourne who has the fastest personal best coming into this race was fourth in 16:06 with Titusville sophomore Mason Jones rounding out the top five with a time of 16:12.

Host Holy Trinity placed five in the top twenty, seven in the top thiry, and ten in the top fifty showing just how deep the Tiger's program is. They posted a team score of 34 points to win the team trophy over Melbourne (79) and Bishop Kenny (98). Their 8th state champion is looking like a reality early on.

On the girl's side it was more Holy Trinity dominance. Junior Shelby Smith (pictured below) proved she will be a state title contender come November running stride for stride with Brevard HEAT senior Emily Chapman. Smith, who was second at this meet behind Julie Wollrath, distanced herself from Chapman with 400 meters to go, showcasing her 2:19. 5:17 speed. She was 9th at the 1A Cross Country Finals last year and with a 19:12 season opener is off to a good start for 2014. Chapman's 19:20 was the only other time under 20 minutes. Afterwards, she told us that she thought it was a good preseason race from both her and Smith, but she learned some things about herself and her racing strategies. Not divulging specifics, we know that both girls will be in the eighteen minute range in a matter of time. 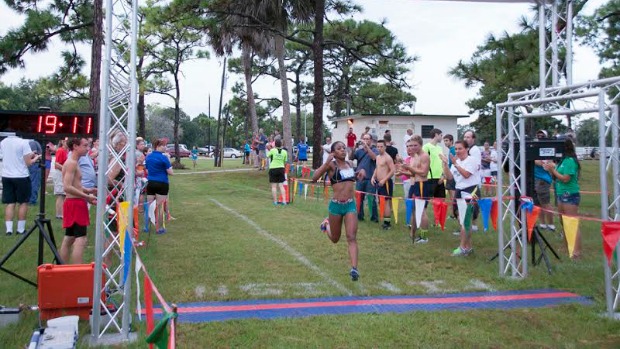 Next through the chute was South Fork's Bethany Hardcastle,  the 3A Region 4 champion last year who finished 26th at the 3A Cross Country Finals, with a time of 20:06. Titusville sophomore Hannah Fleming was fourth in 20:18 then came an onslaught of Tiger talent. Shelby's twin sister Sydney along with Maleia Storum went 5-6 with freshman Chelsea Basford, sophomore Samantha Folio, and eighth grader Sydney Freidel all breaking 21 minutes and giving Holy Trinity five in the top ten. The next five runners for Coach Butler's squad took the next five spots, 11-15. The talent pool is loaded over there! They complete the sweep of team trophies with a 92 point win over Vero Beach 30-122. Titusville was third with a 128 points.