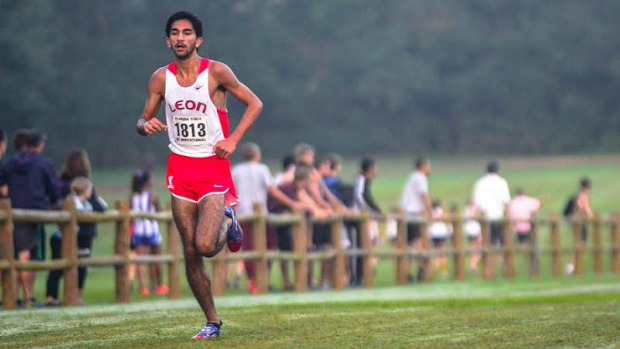 Leon senior Sukhi Khosla has been unbeatable in Florida over the last year and a half. As a junior he won his first 3A Cross Country Finals championship and was 19th at the Foot Locker South Regional. In 2014, Khosla ran sub 14:59 at the FSU Invitational/Pre-State for the second straight year and picked up his second consecutive 3A Cross Country Finals individual title. The Lions were runner-up behind rival Chiles. It was a devastating loss and the chance to go out on top was the ultimate decision that led him to choose to run in NXN SE. He talks about that decision and the workouts leading up to this weekend's main event.

It has been three years since my freshman year state meet when I ran 17:22 for 105th place. Now I'm deciding what college to run for, if I can break a state record, and, more pressing at the moment, which national meet to run. Needless to say, things have changed, but the question remains, Foot Locker or NXN?
Before I was any good on my own, before the talk of college or nationals or records, the five freshman of the Leon class of 2015 wanted to be state champions. TOGETHER. This weighs into my decision more than anything else. We didn't win the state championship we wanted and it hurt us a lot. This being the case, we want to try and make it to Portland. This of course conflicts with my other dream: to run at Foot Locoker Nationals. This is the essential difference between the two races. Footlocker has the prestige, the history, and the chance of being a true national champion. But Nike is together - perhaps the last time together. Maybe if I had made it to San Diego last year the decision would be different, maybe if we'd won the state meet the decision would be easier, maybe if I had intense competition and close races all year long the decision would be obvious, Maybe if I had another year then the decision would be inconsequential. Nothing worked out exactly the way it was supposed to - like it always seems to happen in cross country. Although, whoever is looking for predictability can quit.
Finally, I thought about all the races and all the trips I'm going to go on alone, whether it be in track, or as an individual later in my career. I thought about the teammates I have now, and realized that just having one more trip with them is worth putting off my individual aspirations and Nike will still have great individual competition anyway.

How do you run your best two weeks after peaking for the state meet? Luckily, I don't have to answer this question, and my coach has all the answers. For the two weeks since state, we haven't done our normal mileage nor the same workouts. Mondays and Wednesdays - distance days - have gotten shorter, faster, and even become tempos the last couple miles. Tuesdays we've stepped onto the track. My turnover, my stride length, and my form always seems to come into the finest shape when I get on the track. Thursdays have dropped volume and changed as well. This is a workout journal of my past week. As a note, I never run with a watch, and the times are either from my coach timing me or my estimations on distance runs.

Loosened up my legs with a light run this morning, around 30 minutes - didn't use a watch just jogged. Stretched and took some Ibuprofen, a little sore from the grind of the last few months. In the afternoon started relatively slow with the team for an 8 miler. First couple were around 7 minutes, then picked it up some. No one had dropped by the last time we passed Andrew (Coach Wills). He said to tempo for the way back to the cars or roughly 1.4 miles. I felt like I was flying especially down the hill. Finished around 50 seconds in front of the first guy with a watch who ran 5:40 his last mile. I felt great today.
Tuesday
Finally got through a crap day at school, but we're on the track today so I feel better. Warming up 6 laps was freezing, and a cold wind and light rain didn't make it any better. The workout is gonna be 10 by 400 today, a small step down from 12 last week, but I definitely don't feel as good as yesterday. The track is slick and my shoes are old, no spark and no traction. Coach says its just for turnover and uptempo feelings, tells me not to go "too deep in the well." He loves to say that. First 4 are done - 66,66,65,65. Not great but good enough, after all race pace is only about 71s. Next 4 - 66,65,65,64. The wind picked up hard on the those four, the start had so much wet sand, the first 50 are so slow every time.
Last 2 - 64,62. I didn't redline or even come close to it, felt better at the end than the beginning. Wind was annoying. Cool down 8 laps. Stretched hard afterward and iced foot, it's finally starting to feel better.
Wednesday
No school, woke up later than normal around 9:30. Ate lunch a little late as well closer to 1. Only 6 miles today in the afternoon, chilly but comfortable with a light t-shirt. Obviously took it off after 2 miles. No tempo today just relatively quick pace the whole time, probably broke 5:50 the last mile, most of the team stayed with me.
Legs a little fatigued from track work, but nothing to worry about. We're looking good at this point. Especially my top 5.
Thursday
Thanksgiving. Feels exactly the same as last year, and very comfortable running. Practice early at 10 today instead of the normal 3:20. Warmup longer - three 1200 loops, we're at the Miccosukee Greenway like a normal Thursday today instead of the track. Workout is only 2 by 1200, full recovery, coach says not to go too hard. Fast but comfortable. "There's nothing we can do to be any better on Saturday, but we can still mess it up." 3:45, 3:39. Felt cold, abs hurt, couldn't breathe as well as I should. Perfect - I run my best races off feeling bad the days before.