Hallandale comes in as the odds on favorite. After an oh-so-close one point loss to Bolles last year, the Chargers have reloaded and are favored to win by 20 points. Those points come in eleven of the seventeen events. Only Bolles has more scoring opportunities with 13 of 17, but more about them later.

The Chargers have the second largest contingent of athletes with 16 athletes contributing to their projected 103.33 points. 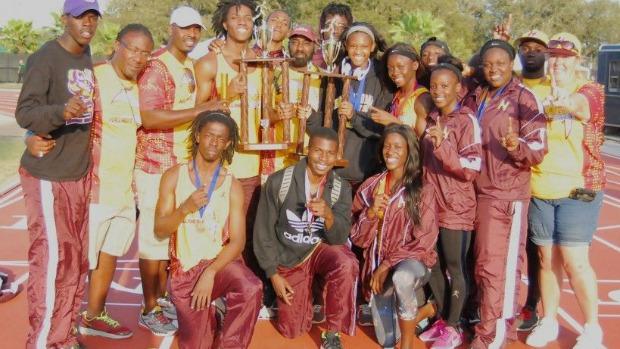 Big points are expected from junior Kimani Rushing who is favored to win the triple jump, 100m and 300m hurdles, and seeded third in the long jump. Hallandale's marquee events will be the hurdles where they are projected to score 45 points: Lamisha Simmons, University of Nebraska, and Tia Strackman are seeded second and sixth in the 100m hurdles behind Rushing's number one seed; in the 300m hurdles, Rushing, Strackman and Simmons have the top three spots. Their relays are also strong with the 4 x 100m and 4 x 400m teams seeded second, and the 4 x 800m team is seeded seventh. Seems everywhere you look, the Chargers are in high scoring positions: Aisha Nelson is seeded third in the high jump; Lamisha Simmons is seeded third in the discus; Amani Heaven is seeded fourth in the shot put; and Kiesha Jean Pierre is seeded fifth in the 200m.

Last year, Ransom Everglades finished sixth with 31 points. This year, they sit on a projected 84.33 points and a second place finish- that would tie the best finish for the Raiders who finished 1.5 points shy of the title in 1980. 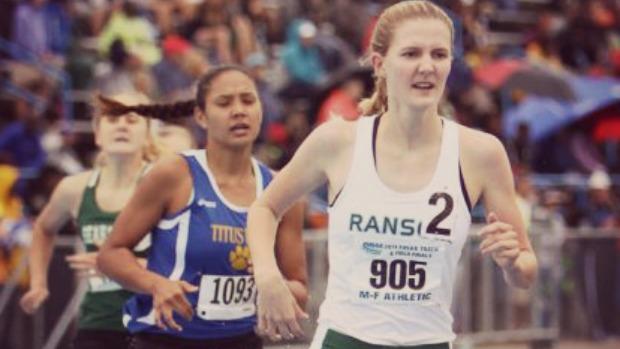 Bolles is projected to score 77.75 points on the day. Their 20 athletes in scoring positions are the largest in class 2A and second of all the classifications to 3A Northwestern which has 22. With scoring in thirteen of the seventeen events, the Bulldogs will be a force to the finish.

Like Ransom, Bolles has a strong middle distance/distance crew who are projected to contribute big points- 36 in all. In the 1600m and 3200m alone, they have seven athletes seeded in the top eight. Those are good odds when you have the fifth, sixth and seventh seed in Caitlyn Collier, Ally Hajda and Suzanne Dannheim in the 1600m, and defending 3200m and this year's third seed, Mackenzie Wilson, and fifth seeded Rachel Shapiro, sixth seeded, Aoife O'Riordan, and seventh seeded Ashley DeHechavarria in the 3200m. In the 800m, Collier is seeded third but has the fastest time in class 2A and in the second fastest time in the state. Big days from this group could swing the team title the Bulldogs way for the second year in a row and the second title in school history. 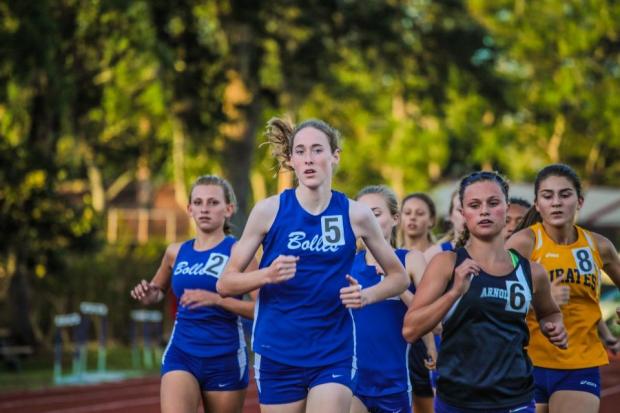 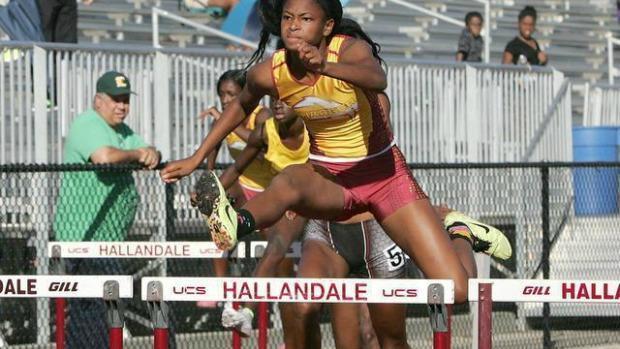 Caitlyn Collier, Bolles. 800m. I cannot remember a more stacked field in class 2A. Five runners under 2:16! Three of the top four in the state!! Unbelievable. Collier's best time of 2:10.11 is a good two seconds better than Skye Zeller's (Space Coast) personal best of 2:12.58 and Lauren Archer's 2:12.92 personal best run at the region 4 meet. Collier and Archer will be rebounding from a tough 1600m race, and that could open the door for Zeller and Katie Pinnell. The 2A state record of 2:10.81 set in 2010 is held by Stephanie Schappert (Pope John Paul II ,Boca Raton). 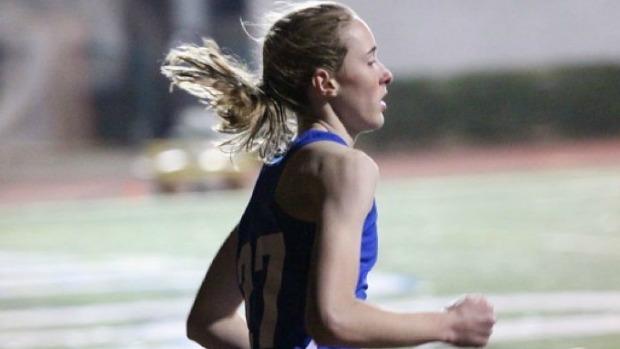 Julie Montgomery, Pine Crest. 1600m. Montgomery was the narrow victor over Mackenzie Wilson in last year's race- just 0.23 seconds separated the two. Wilson will only be running the 3200m this year. That does not make the race any less competitive. Lauren Archer sped to a 5:00.33 win at regionals over Montgomery- that was the state's best time in class 2A. Montgomery's personal best and best this season came in finishing fourth at the FSU Relays in a time of 5:00.95. The 2A state meet record of 4:51.41 was set in 2010 by Stephanie Schappert (Pope John Paul II,Boca Raton). Schappert's 800m/1600m times were the fastest in state meet history.

Mackenzie Wilson, Bolles. 3200m. Wilson dug deep to win last year's title over Montgomery. The first state title of her career…which seems to have lasted forever to me and she is just a junior- I was surprised to see that. Wilson's 2015 best of 11:03.83 is outside of her 10:50.95 best run in last year's win. Montgomery owns the best time in class 2A this season which she set in finishing second at the FSU Relays in a time of 10:43.16. No one else in the division has run 20 seconds of that time, but Montgomery will have a competitive 1600m field and leg of the 4 x 800m in her legs and Wilson will have only the 4 x 800m, so she could turn the tables at meet's end. 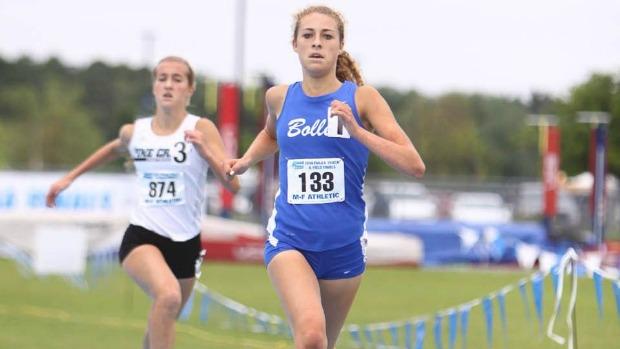 Hallandale's strongest events are the hurdles. The Chargers have the number one, seven and eight seeds in the 110m hurdles in Antwuan Musgrove(Baylor bound), Raymond Crittenden, and Jordan Washington. In the 300m hurdles, Musgrove is seeded first and Crittenden fourth. 28 of their projected 53 points will come from an event where their hopes teeter on getting over the sticks cleanly and on both feet. 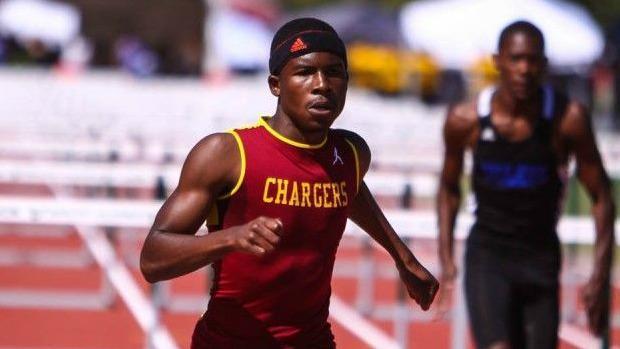 Paxon's biggest strength is in numbers. Whereas, Hallandale is spread out a little more across the 17 events, the Golden Eagles big points will come from the 110m and 300m hurdles. 40 of their projected 46.67 points will come from those two events. Braxton Canady, Tyson Wright, Jalen Mathews and Derrail Stephens are seeded second through fifth in the 110m hurdles. In the 300m hurdles, Canady, Wright and Stephens are seeded second, third, and sixth. A little help will come from Kyle Martin in the high jump where he is seeded in an eight way tie for second and the final event of the day, the 4 x 400m, where the Golden Eagles are seeded fourth. A win for Paxon would be the first in school history. Their best finish was tenth way back in 1956. 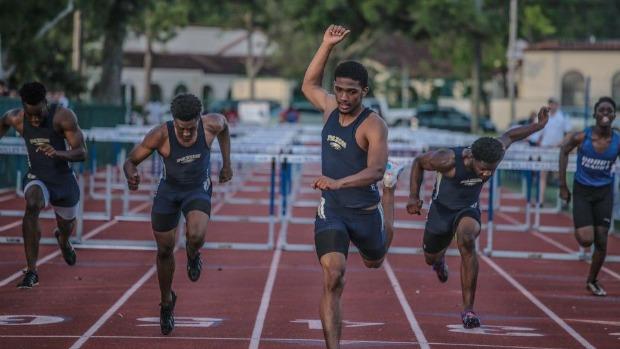 Booker T. Washington counters with the top rated 4 x 400m and 4x 800m relay teams, and the 800m's top seed, Vaquan Small. Small and Pierre Thelon are also among the eight in a tie for second seed in the high jump. Tyquan Thornton is the other part of the equation as he is seeded second in the 400m run. The Tornadoes don't have any room for error and will need a not so great meet from the other two contenders to have a chance. 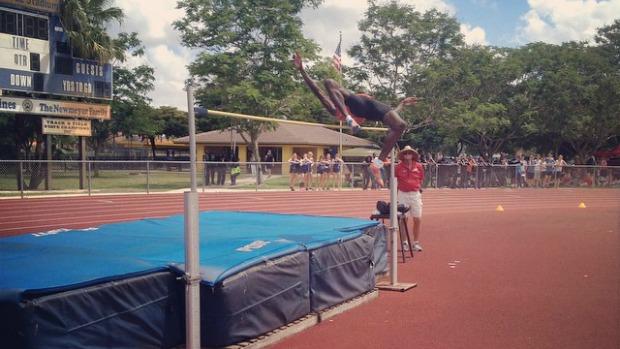 Jonah Daniels, Episcopal. Daniels won last year's state championship with a leap of 22-02.75. He's seeded eight this year with a leap of 22-00.50. His personal best of 23-01.75 was set in finishing second at the Florida Relays. His biggest challenge could come from Chauncey Gardner (Cocoa) who is seeded number one based on a windy mark of 23-01.

Dane Stolsig, West Florida. Discus. Stolsig,a Rice signee, comes in seeded fourth. Last year's toss of 158-11 was good for the win. However, this year, his 158-02 entering the meet is 8 feet shy of number one seed, Eron Carter of Palatka. Stolsig does have the 2A state best of 170-07.50 this season and will need to be at his best in a field that has three 160+ throwers. 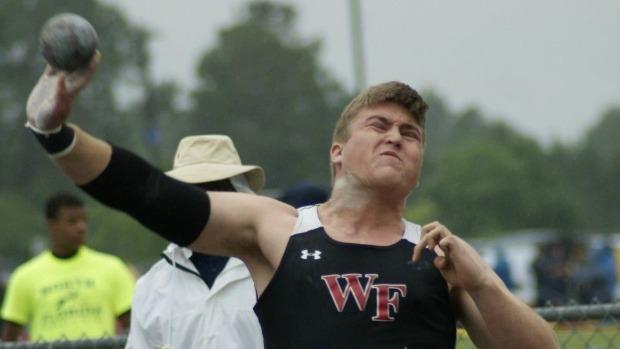 Gabriel Correa, Ransom Everglades. 1600m. Correa comes in as the sixteenth seed. His best of 4:24.80 this season is off the 2A state best run of 4:18.07 run by Connor Vaughn of Wolfson. Vaughn, a University of Florida signee) is seeded third. Joel Lacy of Calvary Christian who boasts a 4:20.46 personal best could also be in contention.

Bishop Kenny senior and South Florida bound David Bell set a personal best of 15-09 at the region meet. He soared to 16-02 inches indoors which is his all-time best. Harry Glasser (Bolles) se the 2A state best of 16-00 which could go be erased on a great day by Bell. 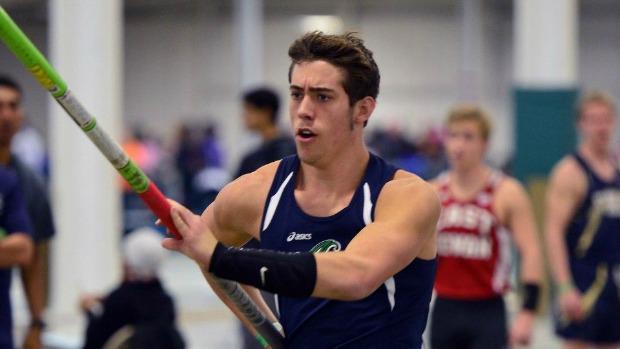