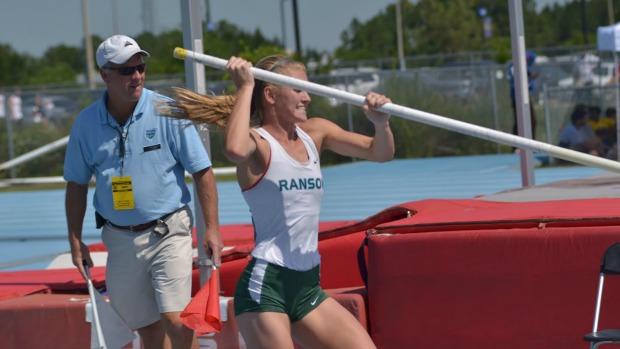 The Florida state pole vault record stood on melting ice as Friday's Class 2A state meet opened to crystal clear weather. Sideways rain kept 2A pole vaulters from even attempting to break Lindsey Enders of Holy Trinity's state mark of 12-10. That mark was from 2011 and it was destined to fall on Friday. The first to crack it was likely to be Tampa Catholic's Nicole Caroll. Caroll already had a 13-0 from the Jimmy Carnes meet and a 13-1.5 mark from the Milrose games in New York.

Ransom Everglades' Nati Sheppard already had a 13-0 from the Pine Crest Panther Relays. What the two had in common was coach Bobby Haeck of Pole Vault City in Melbourne. Haeck was on hand, coaching both athletes up the standards. Both cleared 12 feet, inching dangerously close to the record. Carroll missed her three tries at 12-6 and had to take a seat and watch Sheppard, he club teammate try for the mark.

"This was the first time the kids could open up and do well," Haeck said. "We didn't want to make a lot of adjustments, just go out and vault."

Sheppard vaulted and nailed 13-0 on the first attempt to set down the meet record.

"The hardest thing to do at any level is to control the endorphin rush and have that competitive edge," Haeck said.

Sheppard had the bar moved up to 13-3 to attempt to knock down Erica Sergeant's state record of 13-2. It took two attempts but on the second, Sheppard cleared it and etched her name in the state record book.

"I definitely wanted it this year, I'd been runner up the last two years," Sheppard said.

Sheppard capped an incredible senior season and could not have done much more to cement her reputation as the state's top pole vaulter. 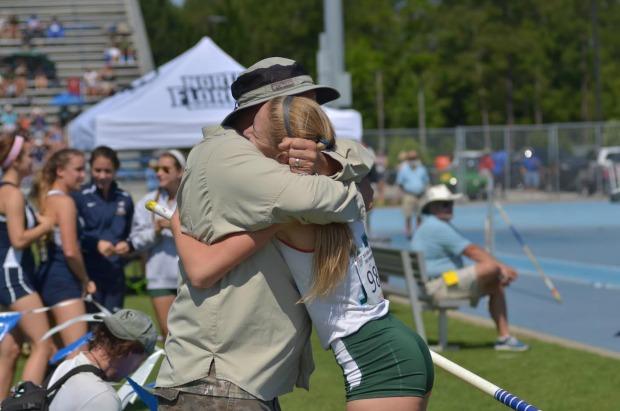 "The Florida Relays were a big meet for me this season," Sheppard said. I consistently vaulted, I moved through poles, knowing I was setting myself up for something big in the future."

Sheppard moves on to compete at Duke next season. Carroll is headed to USF but not until the year after next. It's easy to imagine Carroll chasing Sheppard's state record next year.

See what Nati had to say about her state record vault!