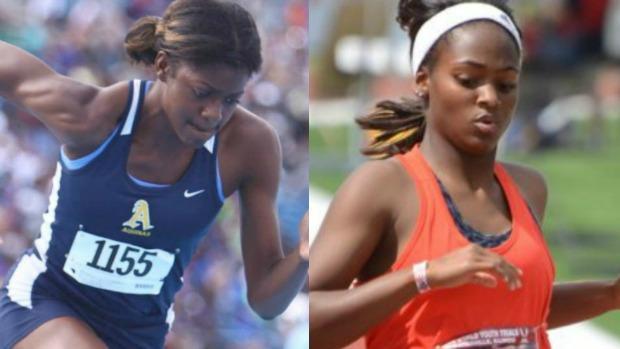 (Former St. Thomas Aquinas standout Kendal Ellis and Lake Highland Prep sprinter Deanna Hill both starred for Southern Cal their freshman seasons and are the top seeds in the 200 and 400m dash respectively this weekend.)

Thursday marks the start of the 2015 USATF Junior (under 20) National Championships at historic Hayward Field at the University of Oregon. The top two runners qualify for the Pan-American Championships later this summer in Canada. The Sunshine state is represented by a quality group of college freshman as well as two of the top prep standouts in University of Texas signees Teahna Daniels and Ashley Miller. 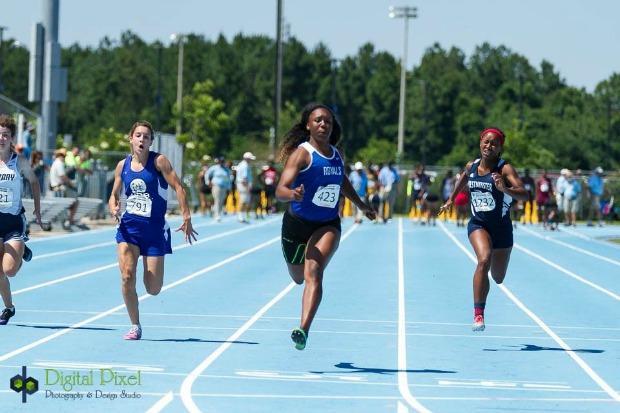 Teahna Daniels (pictured above/center) finished third last year as a junior behind Kaylin Whitney and Arianna Washington, but was impressive enough to earn a spot on the 4x100m relay team that took gold. Can Daniels make the team one more time before she heads off to the University of Texas? Daniels was runner-up at the Dream 100 behind Candace Hill of Georgia (who went onto win Brooks PR with a national high school record of 10.98) and has spent the past week focused on this meet. She has run 11.15w this year in Clermont and might need to post similar times to keep pace with top seed Ky Westbrook of USC (11.13) who was fourth last year and Alesia Hobbs of LSU (11.17). Westbrook and Hobbs were fourth and sixth in the 100m respectively at the NCAA Championships.

The other lone prep entered in the meet is Ashley Miller. Miller was just out west for the Brooks PR Invitational where she was third in the 100m hurdles. The University of Texas signee, moved to Florida this year and swept the 4A titles in the 100m and 300m hurdles. She is currently seeded fifth (13.48) in the event with former Colorado friend and rival Dior Hall (USC) the clear favorite with a personal best of 12.74.

Speaking of USC (Southern Cal), two Trojan freshman and Florida alumni are at the top of their events. Deanna Hill, a 2014 Lake Highland Prep graduate and two-time state champion in the 100 and two-time runner up in the 200, was third at the PAC 12 Championships and owns a personal best of 22.88 which she ran at the Florida Relays. Hill is the only runner in the field who has run under 23s with teammate Westbrook and two Texans Shania Collins and Caitland Smith with bests around 23.2.

Hill's Trojan teammate Kendal Ellis was part of a powerhouse program at St. Thomas Aquinas and tallied multiple state championships in her high school career. Ellis was fifth at the PAC 12 Championships and ran a personal best 52.58 at the NCAA West Preliminary. That mark is the fastest in the field and the only one under 53 seconds.

Former North Florida Christian jumper and University of Florida freshman Darrielle McQueen leads the field event contingent of Florida athletes. McQueen is the second seed in both the long jump and triple jump. She was 12th at the NCAA Championships in the long jump and owns a personal best of 20'8". Courtney Corrin, a rising senior out of California is the top seed with her 21'5" jump which earned her runner-up at this weekend's New Balance Nationals. McQueen posted an All-SEC performance mark of 42'4.75", but Kennedy Jones of Castro Valley, Calif. is the top seed with her California state title-winning jump of 42'5.25". For Darrielle, who lost her father recently, this meet will have an extra special meaning.

Another Gator hoping to make Team USA is former Miami Northwestern Lady Bull Lloydricia Cameron who is competing in the shot put, discus, and hammer throw. Cameron, who was fifth in the discus and tenth in the shot put at the SEC Championships is seeded fifth in both events.

Hannah Giangsapro, a Bartram Trail alumni, and current freshman at South Carolina University will compete in the 5,000m. 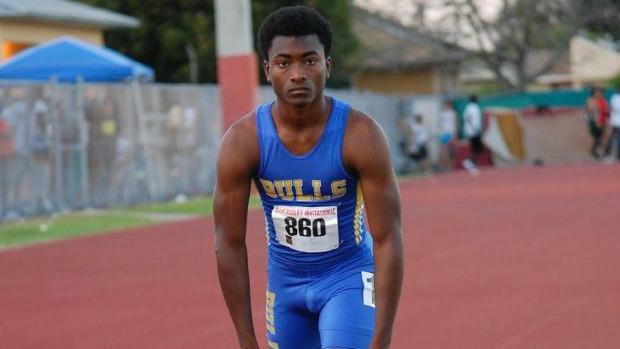 Only three Florida boys are entered in the field and the most likely to make Team USA is former Miami Northwestern quarter-miler and Clemson freshman Cordell Lamb (pictured above). Lamb was the 2014 3A state runner-up and Golden South Classic champion with a season best of 46.78. This year for the Tigers he was sixth at the ACC Championship in a new PR 46.47, the second fastest time in the USA Juniors field behind only Quintaveon Poole. Poole a high schooler from Georgia ran US#5 46.15, three weeks ago at the Georgia Association Area C meet.

Former Apopka High School thrower and current Iowa Central freshman Jamal Whittaker finished his high school career as the 4A state champion in the shot put and runner-up in the discus. He had an impressive college campaign this year with a runner-up showing in the shot put at the NJCAA Division I Outdoor Championship and two fourth place finishes in the discus and hammer respectively. Whittaker is seeded fourth in the discus, but will need the best throw of his life to finish in the top two. Former Father Lopez thrower AJ MacFarland, now at UF will compete in the hammer throw.