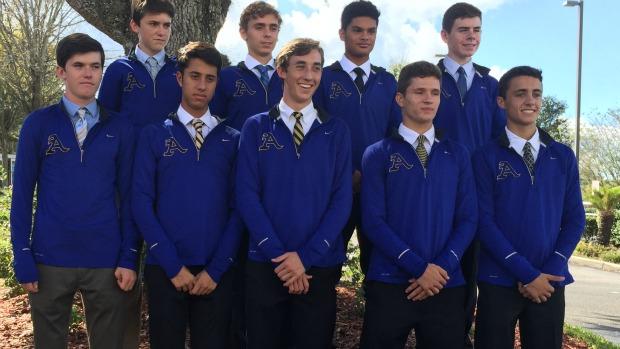 Coach Joe Hazera guided the St. Thomas Aquinas Raider boys to their second 4A Cross Country state championship since 2013. We caught up with Hazera, the first year head coach for STA, to talk about the 2015 season, the road to the title, and what next year has in store for the Raiders.

Flrunners.com: What kind of training did your team get in over the summer months leading into the season?
Coach Hazera: The boys spent the summer building an aerobic base in the severe South Florida heat and humidity.  By the end of the summer, the veterans were averaging 50-60 miles per week which included a 90 minute weekly long run.
FLR: How did you train the team in the final weeks leading up to the state meet?
CH: The training changed leading up to the state meet with the overall volume being decreased. The speed work was different in that the distances of the intervals were reduced from the usual 1600m and 1000m  to 800m and 400m repetitions while increasing the speed and rest periods. An additional rest day was included prior to the regional and state meets.
FLR: What chances or belief did you have in your team's chance and ability to win the state title?
CH: Without a true #1 runner to compete at the front our strength came in the form of depth.  With an average 20 spread between our top 5 runners we believed were were in the running. We believed that if we kept our "pack" together we had an excellent chance.
FLR: What advice or points of emphasis did you give your team prior to the race or the week leading into the state meet?
CH: Stay together and key off of each other.  Run conservative early and more aggressive as the race progressed.
FLR: What was the race plan for the state meet and how did you feel it was executed?
CH: Our plan was to keep all seven runners together and stay off the early pace that is usually set at the state meet. Since this years meet was hotter than usual, we believed that our training in the heat of South Florida would be to our advantage. We wanted to stay patient and move up as the race progressed. Having practiced this strategy at our regional meet, the plan was executed as well as could be expected.
FLR: Who do you feel really stepped up individually the most for the team at the state meet?
CH: The state meet was a true team effort and to single out any single athlete would be unfair to the other six. All seven runners executed the race plan to perfection and had an equal role. Just as important, our #8 runner Nico Ponce continued to train with the others through the state meet. It is both difficult and unselfish to train at that level knowing that you may not have the opportunity. His dedication to "staying ready" was inspiring and added confidence to our team.
FLR: What were your feelings and emotions when you realized your team had won or during the awards?
CH: Proud, excited and deeply satisfied are how I would describe my emotions.  Having come to coach at St. Thomas from a rival school in Broward County where my teams were consistent runner-ups, it was new for me to be on the podium.
FLR: What were the biggest challenges for this year's team?
CH: Since winning a team title requires a complete team effort, health is usually the major challenge for all teams. This year we were very lucky in the fact that we only had one minor injury during the season and only a few days were missed due to a sprained ankle.
FLR: How would you best describe the group of kids that you coach?
CH: They are intelligent, respectful, dedicated and have a deep competitive spirit. Being a newcomer to St. Thomas, I was immediately accepted as part of the family. They are a class act down to the individual. 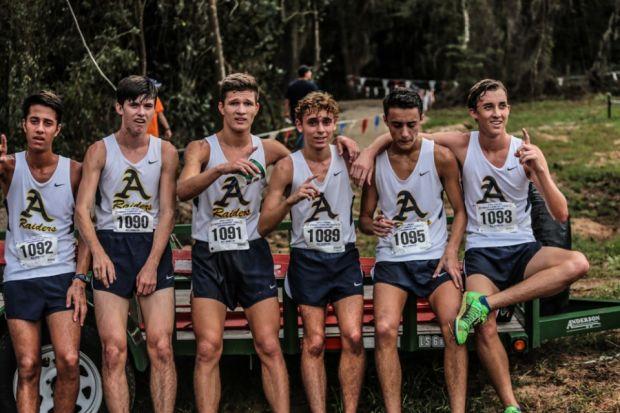 (Photo by Cedric Gillette)
FLR: What role do your assistant coaches play with the program?
CH: Coach Trish Butler left St. Thomas at the end of last school year after her husbands transfer to the Tampa area.  In late September she returned when her husband was transferred back to the Ft. Lauderdale area. Coach Bulter and I worked together with the entire team. We share similar philosophies and as with the boys team this season, coaching was a true team effort. We stand on the podium together, there are no "assistant" coaches.
FLR: What role do your parents have with the program?
CH: Our parents deserve the state championship for parental support!  They opened their arms and homes to the team, provided support at our local meets and our meets in Gainesville and Tallahassee with transportation, food and drinks. They screamed their heads off as the runners passed, took pictures and movies and celebrated with us in our success. What more could be asked?
FLR: Who were the leaders on your team and what was the importance to the squad?
CH: Team captain Darian Adriano was our coach in the field. He played a vital role in the summer, administering workouts in the absence of Coach Butler and prior to my arrival. I know this team would not be as successful without his leadership and the confidence his teammates had in him. Junior Pierce Statham emerged as our future leader and provided the "Fire" in our workouts. 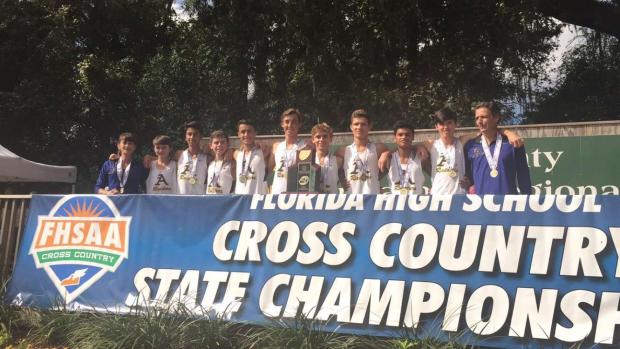 FLR: Every state championship team seems to have a special or unique makeup that makes them state champions. What were some of those characteristics of this year's team?
CH: Unselfish! To an individual, they supported, encouraged and believed in each other and their coaches.
FLR: What are your expectations for next year's team?
CH: Returning 5 of the top 7 runners from this years team means that we will again be strong.  We want to put ourselves in position to compete for a repeat.