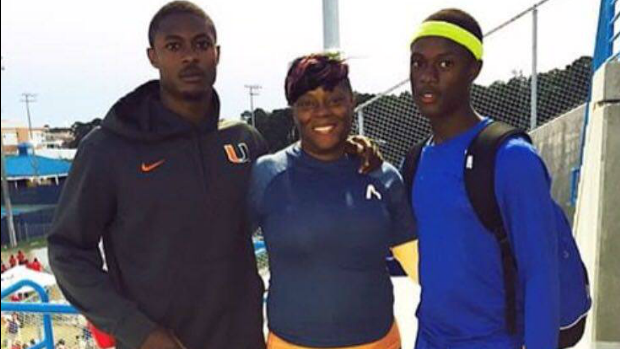 Dana Smith was more than a mother for Thomas Burns. She was his biggest fan. You couldn't miss the 44 year old mother of three at a track meet. Whether it was older brother Artie, or Thomas, the proud mother was in the stands with pom poms, shirts adorned with their pictures, and screaming in support. In October, Smith, a former track star at Miami Northwestern, just like her boys, unexpectedly passed away from a heart attack overnight. Thomas says his mom was a huge part of his life.

"Some of my favorite memories were on the morning of the track meets she'd be so pumped up ready to see me run. I'd always laugh when I saw her like that. She always made sure I did everything I had to do and never let me slack in anything. She's one of the main reasons I'm who I am today." 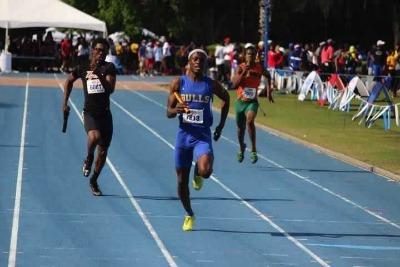 The younger Burns wasn't always a hurdler. He started running track when he was four years old competing for the Miami Northwest XPress club at Moore Park. Thomas used to only run the 100 and 400m dash with the latter being his first love. However, after seeing his older brother Artie who won four state championships while in high school (three in the 100mH and one in the 300mH), was the New Balance Outdoor runner-up in 2011, and went onto the University of Miami, he thought why not give it a shot.

"I remember watching Artie and telling myself that looks easy and I wanted to try them. My first track meet doing them I won and ever since I have always done the hurdles. I enjoy the pressure and excitement that everyone brings to the race. You never know what can happen."

He adds that Artie has taught him several lessons in his running career.

"My brother taught me to never give up no matter what even if I'm 50 meters ahead or even far back in the race. That helped me a lot throughout my park track and high school track days."

I recall a conversation I had with Dana Smith, in the summer before she passed away. She told me, "Todd as good as Artie was in the hurdles, Thomas has the potential to be even better." Thomas says he knew that she felt that way and will aim to live up to that in every track meet he runs. 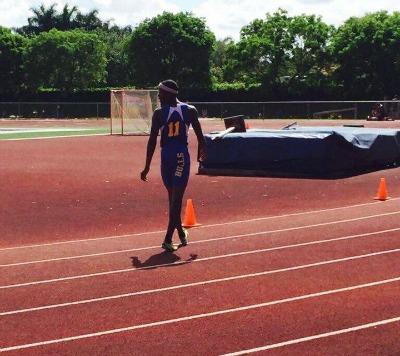 "She always told me to keep doing what I'm doing and that'll be better than him. I will definitely be thinking about her on the track. She'll be on my mind before and after every race. Everyone's win this season will be dedicated to her."
Burns finished third in the 110mH and second in the 300mh at the 3A state meet last year as just a freshman. Without a father figure in his life, combined with the loss of his mother, the 16 year old had to mature quicker than most teenagers his age in the past three months. He says he's had to learn to adapt to his environment as well as stay out of trouble, to keep himself on the right track, and set a positive example for his younger brother.
"I have help from my family and older brother to take care of my little brother so I can lean on him to take some of the pressure off. I look forward to going to practice after school because it is fun just takes my mind off of everything except the track. I'm always in good spirits during practice and meets."
His mom was a fixture at the Bulls practices and meets, helping and encouraging Thomas and his teammates to do their best even if they came in first. Smith wanted the kids to try harder and push harder for better personal bests. Thomas knows she'll be watching down throughout the season and be their biggest cheerleader in heaven.

"I'm looking forward to the major meets like Louie Bing, Bob Hayes, Florida Relays, and the state meet. My goals are to win all of those in both the 110mH and 300mH. To win a state title as a team would be an amazing feeling as well, and with this season being dedicated to my mom, I'd love for that to happen."