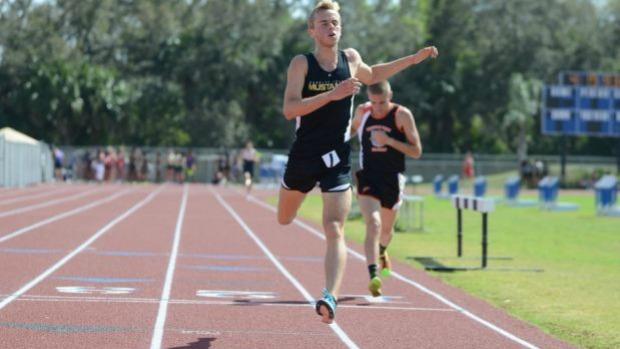 Steven Cross has come from an average runner to the elite stage in just a few short seasons. Heading into his final season of outdoor track, Cory Sayyeau wanted to get a better understanding of his decision making along with how he handles his critics.

Flrunners.com: What was the whole thought process on choosing FSU? It seems as if many runners tend to stay in state rather than branch out?

Steven Cross: I've known the coach for several years now and I know the program, my cross country coach basis our program off of theres. It just felt like home when I took my visit up there, I really like the team up there, the coach is awesome, it just felt like where I was supposed to be. I love the sport, I love improving, I love working hard, I want to get up there and help the team toward NCAA's. Its something I always wanted to strive for even as a freshman when I wasn't at the level I am now.

FLR: What kind of runner is FSU getting, a runner who is in it all the way for four years?

SC: I have big goals heading into college and I know what you mean when talking about Floridians going to state colleges and kind of  falling off. On that note distance running is such a dangerous sport with injuries being common, you cant just look at florida being that way, I'm sure it happens in other states as well. I just pray to be healthy and avoid injuries and staying strong heading into college.

FLR: You're a sub 15 guy on the cross country course, a 4:13 in the 1600m, and we look at the 3200m and it's not really at the same level at the rest. You see guys who run under 15 run sub 9 for 3200m, what would you say to critics who think that your sub 15 could be over reaching since its on a cross country course with many different variables to a 3200m time that doesn't make since to your other times?

SC: I've really been working on it, I think its more of a mental barrier. It's a pet peeve of mine to drop the 3200m time.  It sounds so silly, to me it looks obvious that I should be able to break it, but it's just something I haven't been able to break yet. So I can't talk crap about it, theres been guys better than me in the 3200m and I just want to fix that. I need to push myself harder because I know I have it in me.

FLR: What are the goals for the season? I know thats such a general question and a lot of the time coaches have there runners tell them some goals for the year, but what are your true goals for this last season?

SC: I want to go sub 9 in the 3200m, I know it's possible to go for. I also want to bring home some more state titles and compete nationally.

FLR: Are there any national meets on the calendar for you?

SC: Not yet, I really want to see how the season plays out and also figure out what my college coaches want me to do. It's nice to compete on the national scene, but if the coach wants me to go right into training then that's something I have to do, and I wouldn't mind doing since thats what my next four years will be.

Everyone knows how high school is, and especially these days things are different from 20 even 10 years ago. Partying, drinking, etc.. can get the best of some students, and when it comes to college it can take student athletes away from what there goals were before college. Talking to Steven after his afternoon workout, this kid is the real deal. He genuinely seems to be a great young man.

Florida State should be ecstatic to be coming to there program. I don't normally endorse runners because I've seen on many occasions high school runners going to these big state colleges and turn around and quit the sport a year later or get injured and we never hear about them again. I have even have been a critic of Steven in the past for some of his times not reflecting across the board, with that being said I was completely wrong on this. Steven really is an athlete I can see actually running well in college. Cross is about to make not only the state of Florida proud, but Brevard County as well.