The Steinbrenner steamroller continues to pickup momentum heading into the state series next week. The Warriors could not have had a better send off to the post season than hosting a 35-team and winning both boys and girls team titles. The Warrior boys comfortably out-paced a resurgent Gaither 111-59.50. Plant took third with 53 and Sarasota fourth with 51.50. The Warrior girls put the cap on their performance Saturday winning the 4x400m in 4:02.21 and topping Wharton 132-70. 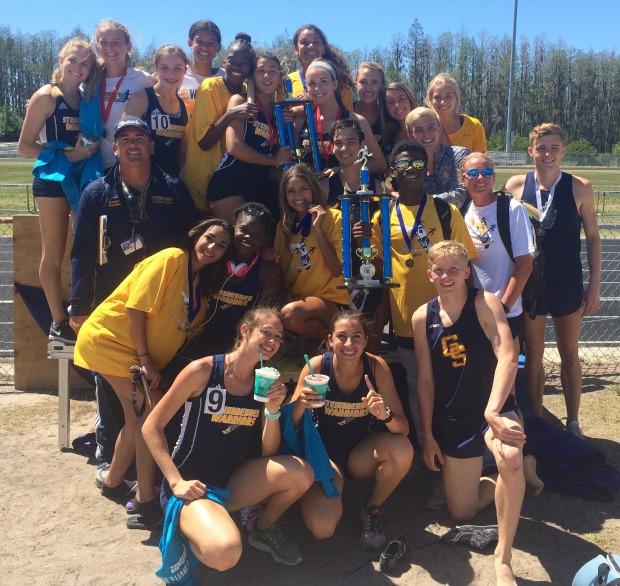 In the 4x800m final, Leto opened up with an early lead. The Tampa Bay Tech relay moved in front by the second leg. Plant moved into the lead as the third leg took over. Into the final exchange, Plant had a two-second lead as Mason Young took the baton. Young tested Plant's Miles Waite on the first lap, Waite held. On the back stretch of the second lap, Young caught him.

"I listened to my coach who told me to sit, so I sat for a little bit but then he told me to go on the second lap on the back stretch," Young said.

The Warrior boys won it in 8:10.85. The Warrior girls shined in the shorter sprints. The freshman tandem of Ken'naria Gadson and Zayne Jack stacked up some Steinbrenner points. In the 400m, Gadson took second (56.04) and Jack eighth. Gadson grabbed fourth in the 200m final (25.64). They paired up to take second in the 4x100m behind Alonso's relay (48.74). Gadson ran on the winning 4x400m relay.

The US #2 4x800m relay from Steinbrenner broke up for Saturday's meet but Natale Hall, Ava Lucke, Sarah Magee and Emily Petrus teammed up to win the 4x800m in 9:53.12.

There were some sizzling individual matchups on tap for Saturday. The most hotly-anticipated showdown never quite happened. Gaither's LaSarah Hargrove and Lake Wales' Maiah Walker are elite runners whose strengths lie on opposite sides of the sprinting spectrum.

Both runners made the 200m final, Hargrove with a 24.49 and Walker with a 24.90, the only times under 25 seconds but Hargrove left early for a Palm Sunday event at her church, leaving Walker to run through the 200m title in 24.74. Wharton's Avonti Holt stepped up in Hargrove's place and pushed Walker with a season best 24.97. 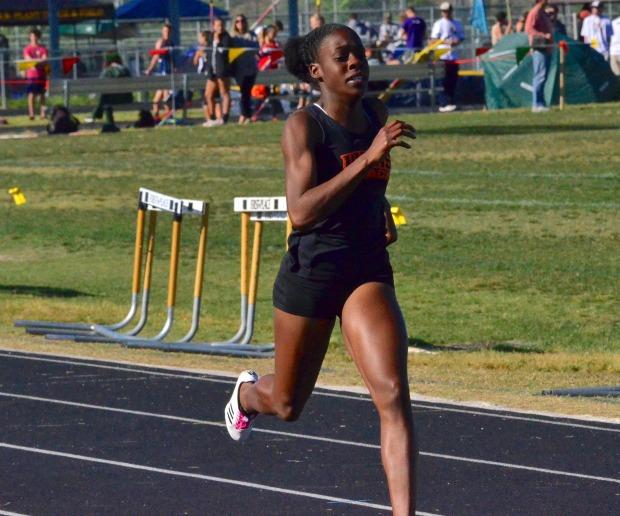 Walker's race in the 400m final was the most intense of the day. Walker, characteristically surges out front early, forcing other runners' hands. Some fine competition went with her. Gadson, Wharton's Bryanna Rivers, Searra Woods and Aria Tate gave chase. Alonso's Stephanie Sandborn got pulled to a season best 59.92 that only got her sixth place. The top six girls were all under a minute. The top three, including Walker, Gadson and Rivers, were all under 57 seconds.

The next best battle was in boys pole vault. Three jumpers, River Ridge's Stone Baker, Gaither's Carter Palasti and Land O' Lakes' Tucker Brace all cleared 14-6. Brace set a PR at 14-6 but went out at 15-0. Meanwhile, Palasti and Baker both cleared 15 on their second attempts. The bar went up to 15-6 but neither Palasti nor Baker could quite get it. It went back to Baker's fewer attempts at 14-6 to split the tie.

"It was a really nice day today and a fast track here," Baker said. "I just need to invert more." 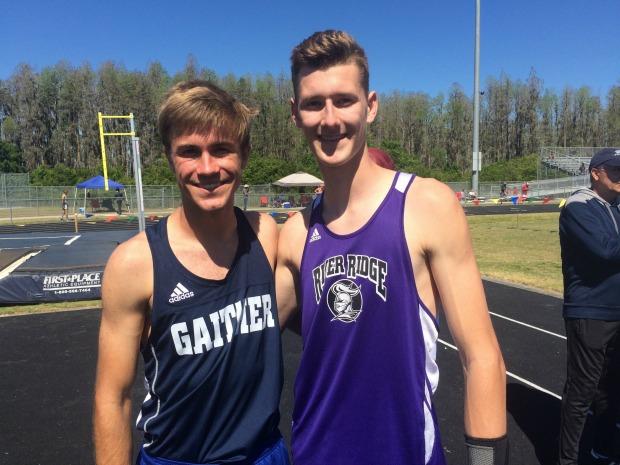 Palasti tied his PR from the American Division meet and was lucky enough to be able to use one of Baker's longer poles. It's likely all three will make the Class 3A state meet in the event.

Two athletes gobbled up all of the hurdling titles. Ridgewood's Brandon Schultz, who seems to reset both of his school records on a weekly basis, did so again on Saturday. In the 300m finals, he ran a 38.88, a personal record and new school record. Schultz also won the 110m hurdles in 14.92. Schultz reset that school record a week ago at his conference meet.

"The rubber track felt way faster," Schultz said. "I feel like asphalt conditions you to run on rubber." 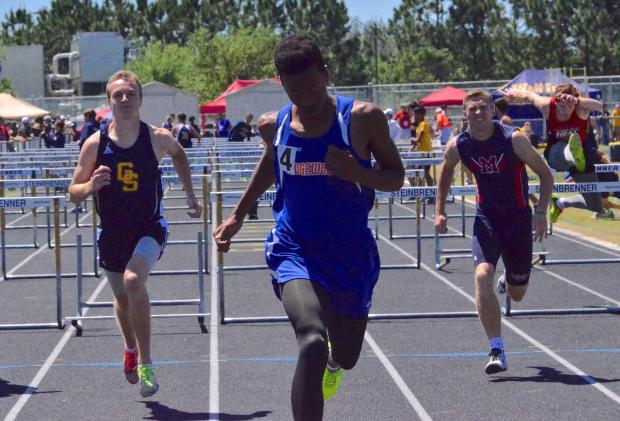 It was a big day for Land O' Lakes' Natalie Abernathy. Abernathy laced up for the 1600m with aims at not just winning but setting down a personal best. She did just that. She and Mitchell's Isabel Oliveto separated from the pack by the second lap. Abernathy pulled away from Oliveto by the third lap and hammered it home in 5:14.66. Abernathy also won the 3200m in 11:28.90. 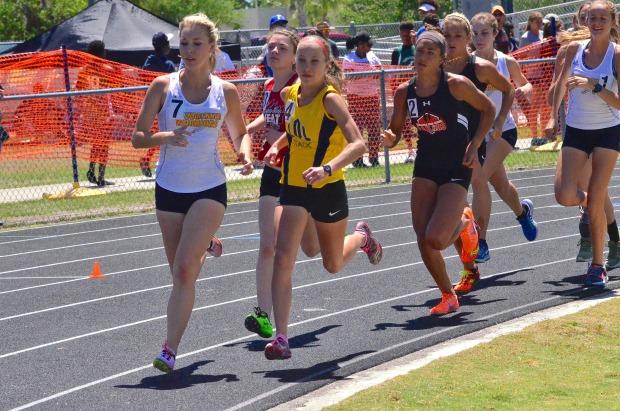 Lake Wales' Paul Stafford was throttling the 1600m until very late in the race. At one point, he was 11 seconds ahead of the field. He finished in personal record 4:23.92, even though Sarasota's Benjamin Hartvigsen closed most of the gap to take second in 4:27.76.

The girls 800m was a great race. Berkeley Prep's Chloe Davis raced out to a fast start. Too fast.

"I had never seen her (Davis) before and she really got out there," Mitchell 800m runner Grace Phillips said. "But I came here this year to win it. I set my PR here last year." 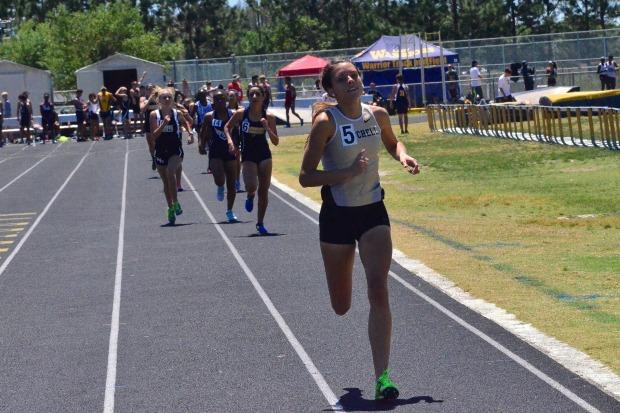 Davis faded and Steinbrenner's Dana Elkalazani took the lead. Into the second lap, Elkalazani had three seconds on Phillips. Phillips closed, closed and passed her on the final turn to come in at a new personal record of 2:20.32.

Another great race was in the boys 3200m. Hillsborough County champ Mason Young, teammate Colton Heath and Land O' Lakes' Alex Normandia pulled away from the group in the first three laps and began drafting off each other.

"Coming up on the mile mark, they (Heath and Young) told me to take the lead," Normandia said.

Normandia had been drafting but not leading but when he got in front, he didn't look back. 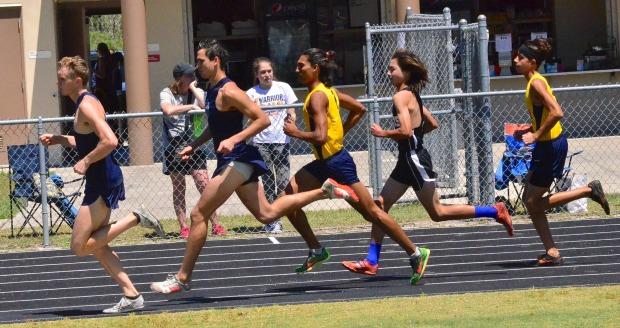 "Once I got in front, the pace felt slow and that was about the time I chose to pull away," Normandia said. "I didn't peek this time."