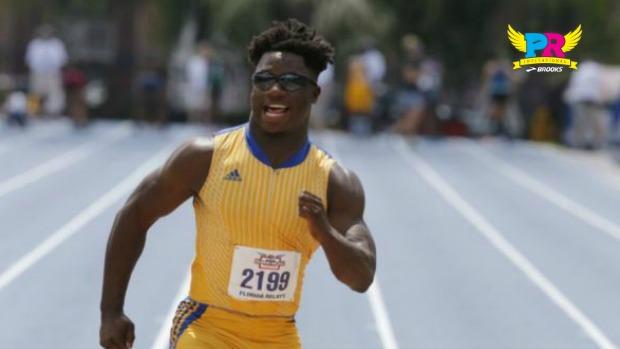 Auburndale junior Chauncy Smart is hungry. Hungry to prove he is one of the fastest sprinters not just in Florida, but in the rest of the country. Smart a two-sport standout in both football and track, clocked a then US#1 time of 10.30w to win the Pepsi Florida Relays. In fourteen races, he tallied two losses, with the last coming at the 3A state championship meet, a heartbreaking photo finish that saw him come up one one-hundredth of a second from the win. Following the meet, Smart thought his year was done, no postseason plans on the horizon, and spring football practice looming. He says he switched from his track spikes and laced up his cleats gearing up for the gridiron.

"I was kind of upset after state, but had to tell myself that i have one more year. I was going to just focus on football and then after spring, start back training for the AAU Club Championships."

However, those plans quickly changed. While at spring football practice, Smart came back into the locker room, checked his phone, and found an email from Brooks saying that he had been invited to the Brooks PR Invitational June 18th in Seattle, Washington. He says it was confirmation that all the hard work he'd been putting in during the year was paying off.

"I was extremely happy. Every since I was invited to Brooks I've been training after football practice every chance I get. I feel so good now about the meet. I think I can come in the top three if not better and run the perfect race."

The Sunshine State standout has been preparing for this test by doing core work, sled work, and speed work specifically block starts and 60m dashes, as well as 120's, with shorter sprints and band work coming as the meet approaches. Smart won't deny that the field of eight which boasts six of the guys under 10.40s, will be one of the most competitive meets of his high school career.

"Oh yeah, this is by far the biggest meet of my life. My mind set going in is to stay humble and stay hungry.  My goal for next Saturday is to run a perfect race and don't worry about what time I run."

Smart adds he's also looking forward to the off the track experience that Brooks PR is known for bringing.

"This will be my first time to Seattle. I look forward to meeting new people, making friends and just having fun. Most importantly, I really want to see the Space Needle."