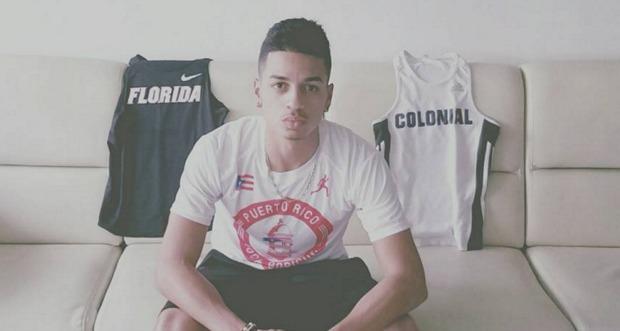 Andres Arroyo idolized Roberto Clemente as a kid growing up in Bayamon, Puerto Rico. Like Clemente, the former Colonial Grenadier, dreamed of roaming the outfield in baseball's major leagues. He moved to Florida at the age of 8, and as he entered high school several years later, those dreams changed, and track and field called his name.

Now, at the University of Florida, Arroyo will compete in his first Olympic Games in the 800m, and represent his birthplace of Puerto Rico. We caught up with him to talk about his road to Rio, the Olympic Games, and much more.

First off, aren't you glad you switched from baseball to track?

Yes, a lot has changed. I had to make a tough decision back then, to go after another dream. But till this day I'm very happy about my decision to focus on track.

You hit the qualifying standard on your home track at Florida Relays when you ran 1:45.78. How special was that night for you?

Coming into Florida Relays. I knew my brother Wesley Vazquez was in good shape. We had been talking about hitting the standard together for a long time before then. With him in the mix I knew it was gonna be a fast race so this was my best chance to attempt hitting the standard. On the day of the race. We were both fired up about qualifying. neither of us was nervous. We were ready. I knew Wesley had a 1:44 under his belt.

So the plan was to stick with him as much as possible. When the race begun. I did just that. I positioned myself right behind him and held my position as long as I could. When I crossed the line. I immediately looked at the board. "Wesley Vazquez 1:44" I was proud of him, but remained calm while I looked at the board for my name.

Then after what seemed like an eternity... "Andrés Arroyo 1:45" is what I saw. I fell to the ground. everything felt surreal. I remember starting to celebrate with Wesley. my other bro Eric Alejandro (400mh) rushed us and joined us including Coach Holloway. It was a day I'll definitely never forget.

Was this a moment you'd always dreamed of?

I knew this day would come. Me and Coach Holloway had been talking about it for almost a year. So we were patient, waiting for it to happen. We worked really hard to prepare for it. So it was just a matter of time.

How do you prepare in the days leading up to your run?

My workouts leading up to Rio were 3 weeks of altitude training in Colombia, 2 weeks of speed work in Puerto Rico, and now till the 12th is just about finding rhythm and comfortability in the race pace.

You've been in Rio for close than a week now.  During the opening ceremony you were tweeting and posting on social media like crazy.  What as that night like for you?

The opening ceremony was definitely a moment I will cherish for the rest of my life and all the attention. Other moments in the games that I'm looking forward to besides racing, are pretty much enjoying my time here and meeting the other athletes.

What does it mean to you represent Puerto Rico and wear your countries colors?

To represent Puerto Rico at the Olympic stage is truly an honor and a dream come true.

A lot of athletes across the state look up to you as a former Central Florida standout and now an Olympian. What advice would you give to younger athletes who might be following your journey?
My advice to the younger ones is to go after their dreams. If you make a plan for a dream it becomes a goal and then all you have to do is stay focused and work hard until you achieve it. I was just a kid behind that Flrunners camera back then. I kept chasing my dreams and now I'm here on the Olympic stage. I'm truly grateful and feel blessed.

What are you looking forward to the most out of this experience?

I'm looking forward to run against the best in the world and my goal is to give my best performance that day and qualify through the races.

Athlete you are looking forward to meeting the most?
It's hard because there are so many, but if I had to pick one then I'd have to say Allyson Felix. I have met

some of the NBA Stars like Thompson, D.Jordan and Paul George.

I don't know if I should say this, but the pizza was on point.

Event you will be watching outside of track and field?

The event I'll be watching is definitely volleyball.

The best piece of gear I picked up is the Olympic edition Galaxy S7 Edge. It's nice!

Arroyo will compete in the opening round of the 800m run set for Friday, August 12th.

We've been covering Andres since he was a high school freshman! Take a look at some of our favorite videos of his journey through high school up until now!