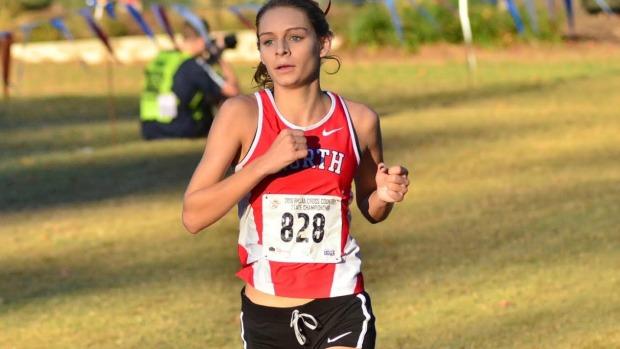 North Fort Myers senior Kayla Easterly had the best race of her high school career at the 2016 Cross Country Finals. Easterly was third  in the 3A race with a monster PR of 18:14.51 which caught the eye of the FSU coaching staff. She felt right at home with the Seminoles and the coaching staff and recently signed with the Noles. We talked to her about the recruiting process, the decision, and her goals for 2017.

Overall the process was very overwhelming. It was definitely difficult trying to balance visits with the coaches since I live in Fort Myers and all the schools were 4-6 hours away, which entailed missing school for the visits. Also, I thought visiting the schools and talking to the coaches would make my decision easier, but it became increasingly difficult to try and figure out which coach and academic system would suit me best since all schools had a great academic and athletic program

Ultimately, you chose FSU. What was it that sold you on the Seminoles?
In the end I picked FSU because I was just extremely impressed with my overall visit. Not so say that my other visits were bad, but I really got to see what the team was like, and I also got to know the coach a bit better. The FSU coach is very similar to the coach I have now which makes the transition easier and I love my current coach. So, to move on to college and have someone so similar to her coach is very exciting for me. I think in the end seeing how close the FSU team was, and the style of Coach Kelly's coaching really convinced me to commit there.
The Cross Country Finals race might have been one of your best. A third place finish  and a huge PR of 18:14.51. How did that help in the recruiting process, especially having it on FSU's course and Coach Kelly there to watch?
I think the state race was a complete game-changer for the recruiting process. Before states, I ran decent times but nothing really outstanding for recruiting. I know the FSU coach was impressed with my performance, and to have a college coach be so involved in my progress now really intrigued me, especially since my times really aren't that elite.
Did you look into the success of newcomers like Fatema Jaffer and Sarah Candiano on a national caliber program at all?
I honestly haven't looked too much into the individual progression of some of the newcomers. I talked briefly with the FSU coach about some of the progress they made just to gain a perspective on where I could potentially be next year progression wise.
Last year you were 11th in the 1,600 and 8th in the 3,200 at state. What are the goals for this upcoming track season?
My goals for the spring are to hopefully make the times applicable for scholarships. This means reducing my 1600 time by over 15 seconds, and my 3200 by over 30 seconds. That's definitely an ambitious goal, but I talked it over with my coach and it's something that we think is achievable. This just means putting in extra work, and making sure I do all of the smalls things right (sleeping, enough nutrition, hydration etc.)
When all is said and done what would you want people to remember about Kayla Easterly?
I think the legacy I want to leave behind goes beyond just my athletic ability. In the end there are various amounts of people who are just as good, and better than I am, so I think my running legacy will become blurred over the next couple of years. I am hopeful that when people think of me they think more of my character and my ambition. I put in LOTS of work to transition from being an average runner to an elite runner. I also worked hard in school to have the best grades I could achieve and to be granted the most academic honors I could achieve. So hopefully that's what comes to mind when I am brought up.
What are you looking forward to most about joining the Seminoles?
I am beyond excited to be a Nole! I think the most exciting thing to me is being able to go back to running with a large team where everyone pushes and supports each other. At North, sports aren't highlighted as much, so there's definitely a deficit in the the girls team. My freshman year I was able to go to states with my team, and since then haven't been able to rekindle to the entire team experience. So I am more than excited to be able to compete along side my teammates!

By The Numbers (Personal Bests)