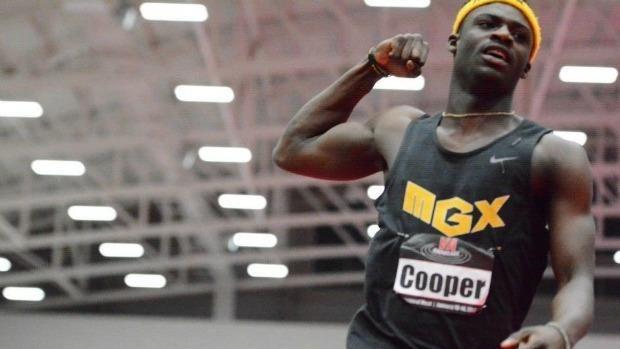 When sixteen year old Tyrese Cooper steps onto the famed Armory Track in New York for this weekend's Armory Track Invitational he won't be racing against his high school peers. Cooper, who last raced at the venue a year ago at New Balance Indoor Nationals, has his eyes set on the stars of the next level, the best the college and the pro ranks have to offer.

Friday afternoon he will race a collegiate field in the 200m and 400m where he owns PR's of 21.22 and 47.97. With talent surrounding him expect sophomore class records and national class records to be in jeopardy.

Saturday, "Smoke", returns for a chance at the trifecta, but it won't come easy. The 300m dash features 2012 Olympic bronze medalist Lalonde Gordon of Trinidad & Tobago who lives and trains in NYC and is fresh off a world leading 200m time of 20.49. Gordon won bronze in the 400m and 4x400m relay in London. Also, on the starting line will be Najee Glass. The former New Jersey stand out and former Florida Gator threatened to break the 600m national record several times in his high school days. Cooper came dangerously close to dipping under 33 seconds when he broke Michael Cherry's record of 33.05 by .02 seconds.

Not only will the record go down, my bold prediction is that Tyrese Cooper sweeps all three races. We've seen that just off of strength work and agility drills he was at the top of his game. There is no doubt Coach Lawshea and protege went back to the drawing board following their time in Virginia to prepare for a meet like this. Lawshea told me last month they aren't scared of competition, as a matter of fact they thrive off of it.

If he continues to hang with the "big boys" I wouldn't be surprised if we hear the pro rumors start to circulate.