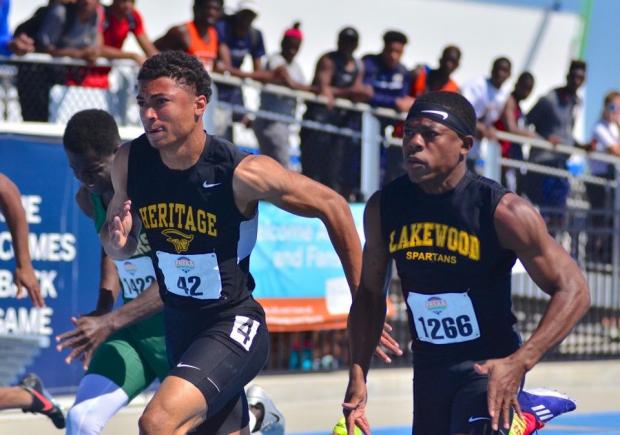 Some will point to the Louie Bing Classic as when the rivalry officially bloomed.

Others might claim it began at other meets and during other performances. But there's no arguing what's carrying over to track meets across Miami right now.

Who's the best sprinter in Dade County?

Better yet, the answer extends far beyond Florida. The pair of sprinters from South Florida could arguably become the two best sprinters in the country by the end of the outdoor season.

They both return for another heavyweight matchup on Saturday at the Sam Burley Hall of Fame Invitational in Miami at Tropical Park.

"So far, so good," Barnes said of Schwartz's season.

Many will point to Cooper, who won two Class 4A individual state titles over the spring, dominated in the summer, and racked up national age group records over the indoor campaign -- generally bumping his Q-score through the roof -- as the unofficial head honcho in high school track and field in Florida.

But then others will insist you not jump to conclusions just yet.

Because, need you be reminded, Schwartz, a runner-up at the Adidas Boost Boston Games 100m, plays two sports and doesn't have the luxury of focusing on just track.

Schwartz, a 5-foot-11 and 165-pound wide receiver for the Class 5A state champion Patriots, has 18 college football scholarship offers to Power 5 schools.

He's a three-star recruit with a 4.34 second 40-yard dash. He can't train the way Cooper does simply by virtue of his many responsibilities in football.

But many will say once Schwartz gets going, he's almost impossible to beat. And pitted against Cooper? It's anyone's bet who will win on any given day.

Still, based partly on Cooper's exposure over the summer and his indoor season, many consider him to be on the path of superstardom.

Tyrese Cooper Training to be Great

Schwartz, at least as it stands now, is still a footnote.

"I do think he's overshadowed because he's in football," Barnes said of Schwartz.

But the junior is hoping to change that this season. And while he's setting goals on hitting particular times, he places more value on moments.

So let's get to the track and field meet in question.

When Cooper and Schwartz lined up in the 100m finals at Louie Bing on Feb. 17-18, Schwartz took over after his drive phase. He slid into the finish line in 10.54 seconds.

Not to be outdone, Cooper shifted to another gear in the 200m -- unquestionably -- and zoomed to the finish in a winning time of 20.44 seconds. Only, as he approached the finish line, he extended his hands to the air in triumph. Then he failed to shake the hand of Schwartz after the race.

"Peopled asked me about it, and I didn't think it mattered so much," Barnes said. "But we have rules. And you have to have sportsmanship, whether you win or whether you lose. You need to shake your opponents hand when you win or lose."

Still, Barnes felt "it was one of the fastest Louie Bings I've seen since I started coaching in Dade County."

And from there, many envision this rivalry to blossom.

Schwartz doesn't describe the competition as volatile, though. He believes Cooper has become an opponent he can challenge on any given day.

"Last year he always beat me," Schwartz said. "But when I beat him this year for the first time, it shifted. The 200 thing happened and then the taunting. Now it's more of a rivalry. I think he knows I can get him."

Perhaps the outdoor season will give Schwartz more of a chance to show the state, and the country, what he can do.

After a season in which he dropped his previous 100m PR from 10.65 to 10.26, Barnes believes he can extend his performances even further: maybe even to that holy ground of 10.00 seconds in the 100m -- which would tie a 2014 national record by Trentavis Friday of Cherryville, North Carolina.

"With this guy, we don't see progression with him, we just see drops in time," Barnes said. "Just the way he is, he's bigger, he's stronger, he's definitely more focused. I talk to him about focus and he hits me back with positive things. I really believe he can run 10.0 and 20.4 this year."

But Schwartz has another quandary on his hands, too. While his potential football career continues to grow -- he was invited to an exclusive football camp by Nike called The Opening -- Schwartz still isn't quite sure what he wants to do moving forward.

He knows he wants to run track and play football in college, but he's unsure which will take a backseat for the other.

"I tell him all the time, make sure you choose a school that fits you and not what fits others," Barnes said. "I tell him if he wants to run track, he needs to be sure about it."

He certainly knows that each take an equal share in his heart.

"I love track and football equally," Schwartz said. "I'm looking forward to going to school to do both."

But in the meantime, the junior sprinter is going to concentrate on his junior season. And next up is Sam Burley on Saturday, where yet again he'll face an opponent that always seems to bring out the best in him.