Last season, it was all Steinbrenner. The Warriors swept both boys and girls titles. 2017 saw very different faces in some of the traditional county powerhouses. The Steinbrenner girls prevailed but this year with a core of young athletes, instead of the senior-heavy squad of last season. 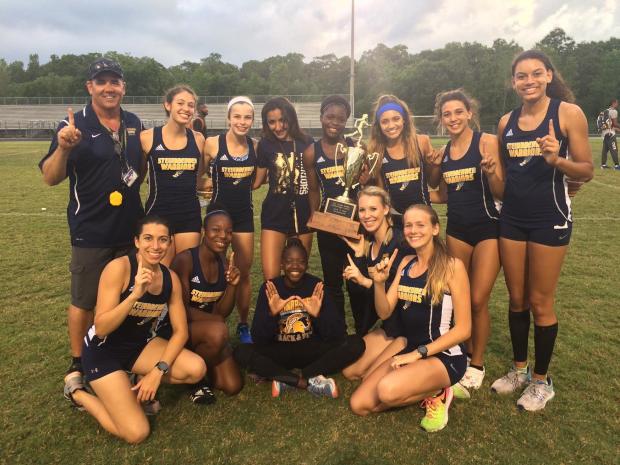 It's not the hurdles and distance as much for the Warriors, either. They are strong in the sprints. Freshmen Zayne Jack and Ken'naria Gadson are a tandem that should stock the Warriors with a solid core for the next three years. Jack and Gadson went 2-3 in the 100m prelims and took second and third in the 100m final (12.08 and 12.40). Jack took third in the 200m final (25.56) and Gadson took fifth (25.80).

Then Gadson won a fantastic 400m final in 55.80, just off her 55.60 from IMG, the fourth-best time in Class 4A this season. In the 400m final, the top four runners, Gadson, Savyon Toombs (Hillsborough), Serena Gadson (Steinbrenner) and Shaniya Benjamin (Alonso), all came in under 57 seconds. Gadson shines in the middle distance. Her PR in the 400m is a 54.57 that won the AAU National Club Championship in 2016.

"Because I have longer legs, my speed doesn't catch on until later," Gadson said. 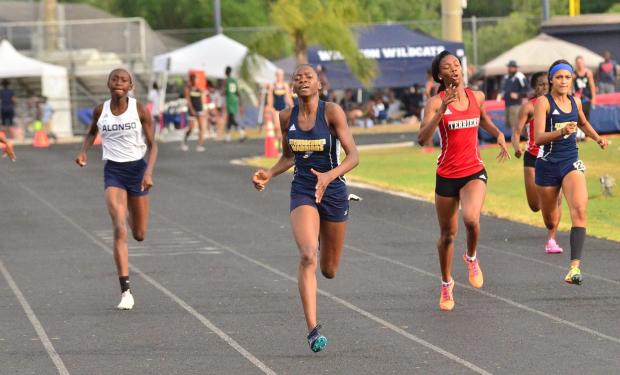 The Steinbrenner distance group is alive and well, too. Dana Elkalazani took second in the 800m for the Warriors behind a home stretch surge from Newsome's Emma Solis' PR 2:20.05. Alexandra Straumann is really starting to find her groove and she set down a runner up finish to Hurricane Hertenstein's 4:56.95 with a 5:09.14, the sixth-best time in Class 4A this season and smashing her PR by six seconds.

The Warrior 4x800m relay did not run their A-team on Tuesday but the A-team that competed at UF on March 30, ran the second fastest time in the nation this season, a blazing fast, school record by 19 seconds, number two all-time in Hillsborough County, 9:11.28. That relay consisted of both Gadson sisters, Straumann and Emily Petrus.

Side note about Florida girls 4x800m this season:

Pole vaulter Jennifer Teixeira battled Freedom's Breanna Snyder through a 19-jump duel that didn't end until both vaulters went over 10-0, up to 10-6, back down to 10-3 and finally Teixeira got 10-0 again to settle the marathon. Teixeira took nine jumps and Snyder 10. Both commented that they'd never had to take that many jumps before. Steinbrenner thrower Samantha Davila has been one of the constants for the Warriors. She won her second-straight county, shot put title at 38-2(11.63m). Davila also is a 4-time American Division champ. In the end, the Warriors out-paced the Terriers 145-106 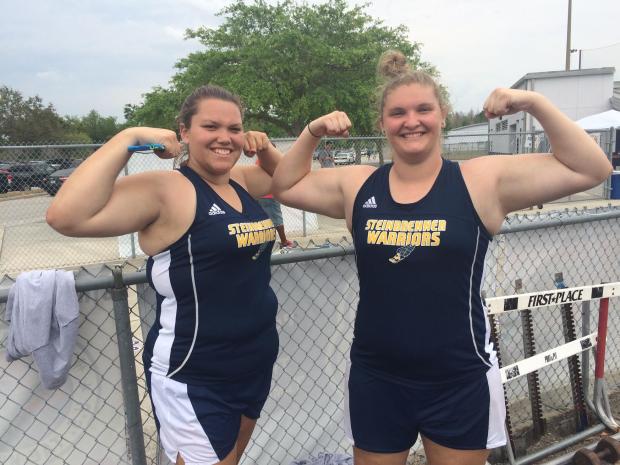 On the boys side, and on both sides really, the word got out that Hillsborough is a good place to run track. Elite athletes have flocked to Hillsborough this season. It probably helped that sprint specialist Steven Rivers came on board. Armwood freshman and 2016 county champion Ani Wells is now Hillsborough sophomore Ani Wells. She ran on the 4x100m relay but not the individual events as she is coming back from an injury. Her older brother Moses Wells is now at Hillsborough as is former Blake hurdler Charlie Thomas. Byron Allen, a strong middle-distance runner came over from Riverview.

"We have the pieces to compete with any team in the state," Hillsborough horizontal jump guru Karieem Webb said.

Terrier athletes committing to run in college is probably a big factor, too. J'Nai Taylor recently verbally committed to FIU. Daneesha Davidson signed with UCF in February. Davidson did not compete Tuesday at Wharton but it's hoped that she'll lace up for the state series. In Davidson's place, East Bay's Yuriah Bigos won triple jump with a very respectable 37-5.25.

"Moses is always a big competitor," Thomas said. "When you have someone consistently pushing you, it elevates you to their level." 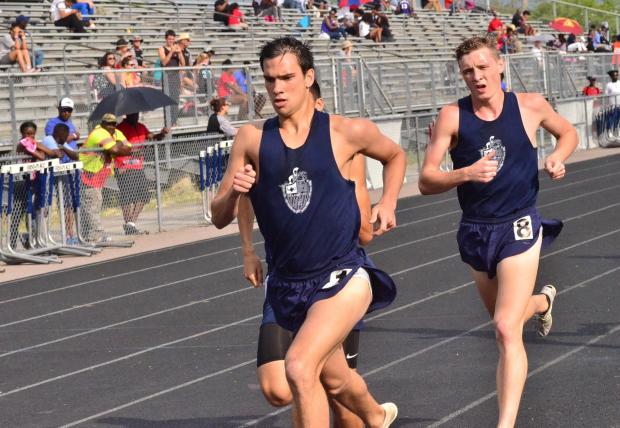 Individually, no one had a bigger day than Gaither's LaSarah Hargrove. Hargrove took a 12.01 preliminary time into the 100m finals and won it in 11.89. That's just off her 11.81 from the American Division meet, the fourth-best mark in 4A this year. Hargrove followed it up with a new personal and school record 24.34 to win the 200m final. That time moves into the third-best spot in 3A this year.

"I knew I had to work harder than before (after coming in second at county a year ago)," Hargrove said. "I did that but now I still have to work harder. I'm not finished yet." 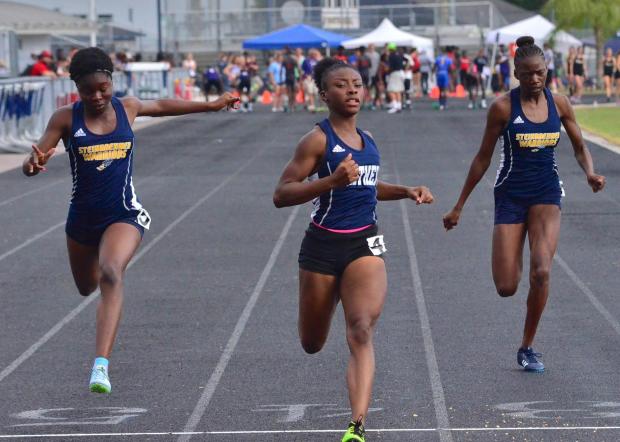 Hiding out in the relays on Tuesday was Wharton's Bryanna Rivers. Rivers has been on a tear this season. She had a huge day at the UF Pepsi Relays where she broke both the 800m and 1600m school records. The new records are 2:11.64 and 5:04.80. That 2:11 is the fifth-best time in the state this season. Teammate Aria Tate won the 100m hurdles in 14.57, that's just off her 14.30 from UF, the third-best time in 4A this year. Makayla Williams won her first county title in the 300m hurdles with a PR 44.74. Williams might just have found her event, after doing primarily sprints and horizontal jumps last season.

Out of nowhere came distance runners Dalton Morley of Leto and Ricardo Reyes of Tampa Bay Tech. Morley, a senior, was out last season due to injury and competed in just two meets all season. He came roaring onto the scene Tuesday at Wharton, topping a solid field with a 1:57.01. Injury cut Reyes' 2016 season short as well but Reyes' 4:30.07 was a PR for second place. 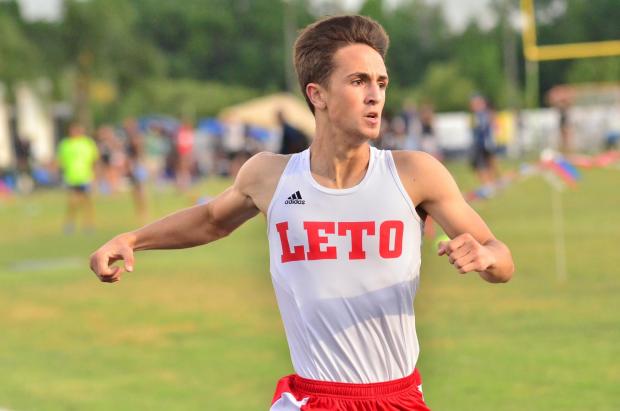