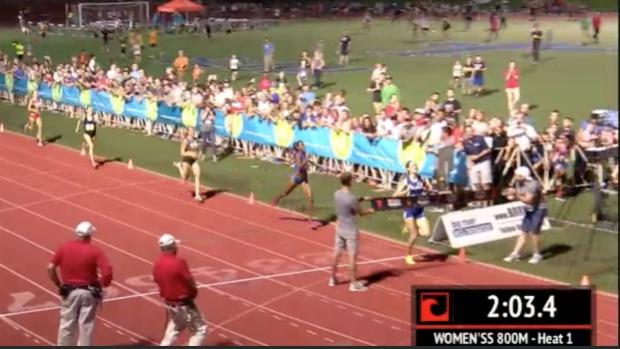 Caitlin Collier defeated a field of professional athletes in the girls 800m with a state record and US#2 time of 2:03.32 at the Festival of Miles in St. Louis, Missouri. The pacer brought the group through 400m right around 59 seconds with the hopes of hitting the USATF "A" standard of 2:02. The Bolles rising senior was in the back of the pack, sitting in fifth with a lap to go, swung to the outside, and began to pick runners off. Collier ran 56.71 in the open 400 earlier this year and showed the speed training has paid off.

Meet announcer Lincoln Shryack said after the race, "2:02 puts you in the super elite of women's 800m running as far as on the national stage throughout history. So really Collier not to far off. What an upset here at the Festival of Miles."

However she isn't done. Next up for Collier, will be the 1,600m at New Balance Nationals then the 800m at Junior Nationals in Sacramento where she looks to improve on her 6th place finish from a year ago.