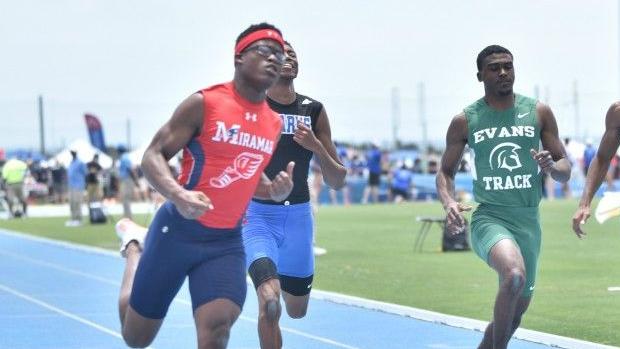 We spotlight sprinterTaylor Banks who is one of three Florida boys entered in the 100m dash at the 2017 Brooks PR Invitational. Banks has run 10.34w and was third at Flo Golden South. The Miramar rising junior is joined in Seattle by teammates Terrence Horne Jr. (100) and Jamal Walton who will compete in the 400m dash. (Photo by Tyler Copeland)

When did you first learn that you were invited to the Brooks PR Invitational and how did your react?

One day my coach had called me from class and said look at the email he received. It said I was invited to Brooks PR. I didn't  believe it at first, then I read the email again. I was so excited I started dancing. I couldn't stop smiling.

What did it mean to you to be invited?

I felt honored to be invited to this meet. Being recognized as as one of the top sprinters in the nation is a blessing. I always dreamed of running at this meet.

You're going with two of your teammates, Terrence Horne and Jamal Walton. Coach McComb, your coach is going to be there as well to watch. How cool is it to share this experience with all of them?

It means  a lot because not many people can say that they had three athletes from the same school get invited to Brooks PR.

What specific workouts/training have you been doing this week leading up to Brooks PR?

I've been focusing on my starts and my  finish.

What are you most looking forward about your trip, race and the weekend at the Brooks PR Invitational in Seattle?

I'm looking forward to competing against some of the nations fastest athletes like Jeffrey Hulon and  Chauncy smart. I want to run a wind legal 10.3 or 10.4 low. I've never been on the west coast or to Seattle before so it's going to be cool. I get to see how it's like over there and I am able get that Brooks experience

The Low Down: Get To Know More About Taylor

What music do you listen to before the race?

I like to listen to rap music. It gets me hyped before  I run. I listen to rappers like Meek Mill, Drake, Rick Ross and Young Jeezy. They know  to get me hype.

What would you consider  your best or favorite race  of all time?

I would consider my 200m race at regionals my best race of all time because I ended up,shocking  my self,by beating people I never beat before .i ran my personal best of a 21.14,I never thought I would run that fast,coming into that race I was doubting myself about me qualifying for states,because I had the 6th fastest time going into the finals,& 5 people ahead of me were running very fast times.so I just said to my self get out,and finish,and that what I did and ended up qualifying for states in the 200 meters

I like to hang out with my friends and have fun. I like to draw,eat, listen to music, and play video games.