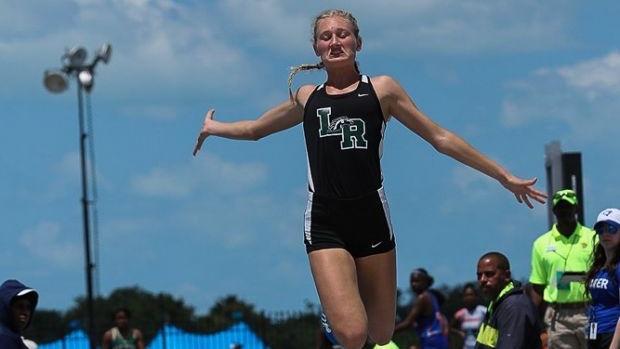 We put a bow on the 2017 track and field season by award our end of the year awards. The girls field events were competitive with names like Debbie Ajagbe in the throws, Haidyn Turner in the pole vault, and Tiara McMinn in the high jump, but it was Lakewood Ranch's Sophia Falco who earns our Girls Field Event Athlete of the Year award.

"It's such an honor to be picked as the field event MVP, but more than that it really means all of the hard work I have been putting in has paid off," she said.

Falco, a Vanderbilt signee admits that at the beginning of the season she wasn't as jumping well and that it was hard to get back into the swing of things. Although the numbers weren't where she wanted them to be she was tallying up victories and quickly improving her confidence.

In the long jump, the Mustangs' workhorse won ten of eleven meets including her second straight 4A state championship and a national championship at New Balance Nationals. Her mark of 20-5 ended the year at US#5 and as one of the best jumps in Florida history.

Equally as impressive are her accolades in the triple jump. The 2016 state runner-up and New Balance Nationals champion finished the regular season undefeated and with a 4A state championship trophy. Her mark of 42-8 is also US#5 and ranks as one of the best ever in state history.

Of the ten meets, the only two times she didn't bring back gold were at New Balance Nationals where she finished third and USA Juniors where she just missed a spot on Team USA with fourth place finish.

"The high point of my season was winning nationals in the long jump," she explained."At the beginning of the year I had no idea how well my season would go. I made improvements in all of my events this year, so it was a great last year to prepare for collegiate track. "