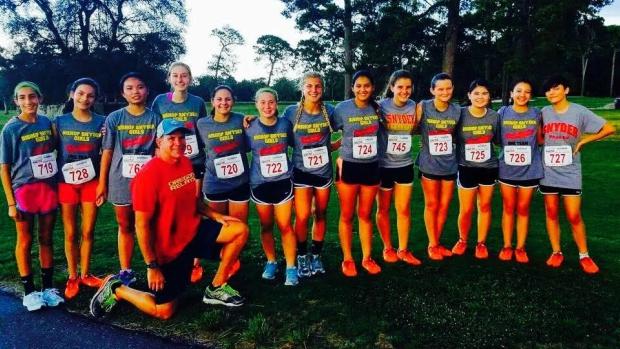 On Friday, I will be heading back to Brevard College as a head girls' cross country coach at Bishop Snyder in Jacksonville. Below is a reminiscence of my fond memories of Brevard when I went there as a camper from 1980-1986.

It was the summer of 1980. Jimmy Carter was still President. The US was boycotting the Olympic Games in Moscow.

I was 12 years old and a rising 7th grader at The Bolles School in Jacksonville. Intimidated by attempting to join a High school cross-country team (at a brand new school) as a 7th grader, I asked my dad if he could check out any running camps for the summer. A University of Florida graduate, and runner himself, my dad was good friends with Roy Benson, former Gator track coach who had started a running camp in conjunction with coach Norm Witek at Brevard Junior College. (as it was then)

I had never been to the mountains, and convinced one of my fellow 12 year old running buddies to join me. (He was a rising 7th grader at our District rival school Episcopal)

His mom  drove us up, and dropped us off at the dorms. I was very unsure what to expect, but thought it was cool to be staying "on my own" in a college dorm - it was my first ever sleepaway camp.

Believe it or not, but I still have my 37 year old faded, running log from that summer (now with yellow pages) to help me with my memories.

We hit it hard - a little too hard - right out of the gates, supplementing our twice-daily runs with some impromptu runs in the cornfields - which I believe are now baseball facilities.

I came down with a severe case of shin splints, which seemed to be helped by icing my legs in the cold stream that runs right through the middle of campus.

Ironically, one of the charismatic coaches that I took a liking to was Terry Smith, then the head girls' coach at Buchholz high school in Gainesville. Terry was half of the famed coaching duo, along with Bob Hans, who coached the boys at Buchholz.

Little did I know, in a purely circumstantial turn around, it was Terry Smith's position as head coach that I took over last summer - 36 years after I first met him at Brevard.

I don't recall if any high schools in Jacksonville had discovered this camp, but that would soon change.

In short, I managed to get in 50 miles of running that week, (my highest ever) and was able to make the Varsity team at Bolles that fall.

We made it to the state cross-country meet that fall for the first time ever, but just barely. We may have even finished last at State.

But I was sold on camp, and spread the word on the team, and the next year I think we brought 7 or 8 guys up to Brevard.

The camp was booming, and soon, as word got out, "anyone who was anyone" on the high school scene in Florida seemed to make their way up to Brevard each summer.

There was something mystical about running on those tough, hilly mountain runs, and the bonding that occurred within our team seemed invaluable in our progress.

We had one of the great all-time coaches back then, Rodney Smith, who had already won a state title with his girls at Bolles in 1980, and was almost like a big brother to me.

With his prodding, he arranged a private "inspirational meeting" with Coach Benson at the camp, who got us together in a classroom and told us he had been watching us for 3 years and thought we had what it took to be state cross-country champions.

EDITORS'S NOTE: BOLLES HAS NOT WON A TITLE IN THE 32 YEARS HENCE, BUT IS RANKED #1 IN THE STATE GOING INTO THIS FALL - AND I THINK IS POISED TO END THE DROUGHT.

As a 49 year old, now with 5 kids of my own, (my 10th grade son will be with us at camp) I can say without flinching, those six years of camp - and high school cross-country) were among the most treasured moments of my life.

My team-mates and I at Bolles were soul-mates. We were best friends, on and off the course. We hung out together, dealt with teenage issues together, made fun of each other. We worked hard and played hard.

Would we have been as successful without running camp ? Maybe. Maybe not. We were a pretty committed group anyway, but the bonding and galvanizing that went on in those magical, lazy summers in the mountains seemed to be the potion that brought it all together.

I was hired too late last summer to organize my girls' team to get to Brevard, but let it be known that starting this summer, camp would be mandatory and considered a staple of our program.

So Friday morning we are headed out. Myself, 11 girls, 2 assistant coaches and 3 parents. We are spending the weekend at Lake Junaluska for a team retreat. Running, swimming, white water rafting and laying down goals.

On Sunday we will roll into Brevard for a week of camp. I am sure much has changed (Brevard is now a 4 year college - Roy Benson is no longer involved, and Norm Witek and his family run the camp)

I am also sure much has NOT changed. When you have a winning formula, you leave it alone.

My life has come full circle, and I am overjoyed to share with my girls that "magic" of Brevard that propelled my high school career and formative teenage years - and I hope will do the same for them.

I hope to see many of you there. And oh yes, Terry Smith is still there, 40 years strong and now a "legend" on campus in summertime.