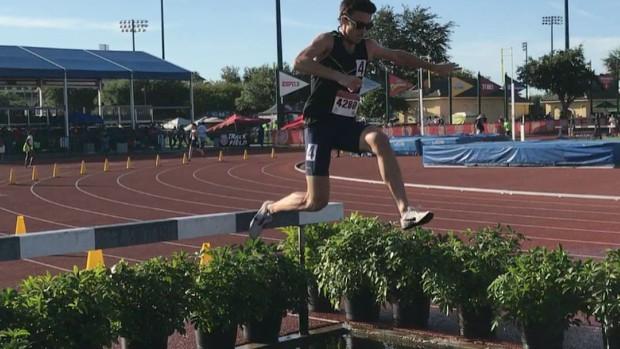 Citrus Park Christian's Trevor Foley didn't compete in the state track and field series, instead he was quietly training and preparing for the upcoming cross country season. Foley, the district and regional champion while at Hernando High School last year, finished in the top ten in every race he entered and was 28th at the 2A Cross Country Finals. To mix up his training, Foley ventured into uncharted territory, the steeplechase.

"This was my first time," he said. "My coach and I decided to do this because we are in a down week and thought it would be something fun to change up the pace."

Foley conquered the 2k steeplechase in 6:16.02, not quite the meet record of 6:03.83, but good enough for first place and national champion at the AAU National Club Championships. He won by thirty seconds over the rest of the field.

"We did an 8x400 workout over five hurdles at a pretty fast pace with very short rest to prepare for this meet," he explained.

A familiar face on the championship podium was Foley's teammate Brooke Santiesteban who joins Foley at Citrus Park Christian after transferring from 2016 4A Cross Country Finals winners Steinbrenner. The rising senior was competing in her fifth 2k steeple in her career and coasted to an easy win in 7:51.23.

"It's great that Brooke and I could both win for are coach and for our school," Foley said. "She did great." 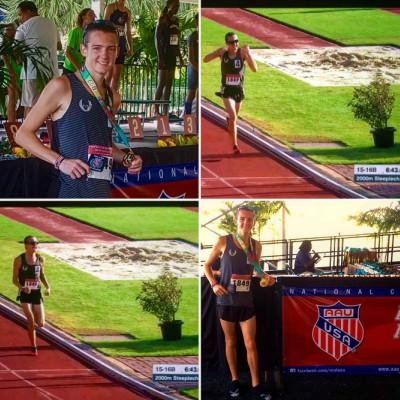 Nelson gave the Sunshine State three wins in four 2k steeplechase races winning the event by nearly 20 seconds in a time of 6:44.10.

"My coaches and I have worked hard all summer to get my technique on the hurdles and the water pit down," Nelson said. "We worked on the strategy for the race and was able to execute it well, taking control with three laps to go, and winning by over 20 seconds."

Nelson will head up to Detroit for the AAU Junior Olympics where he is the top seed in the event and will also run the 1,500 and 3,000 meters.

"'I'm really excited about the win and being National Champion," he added. I am looking forward to the Jr. Olympics and hopefully winning again there."