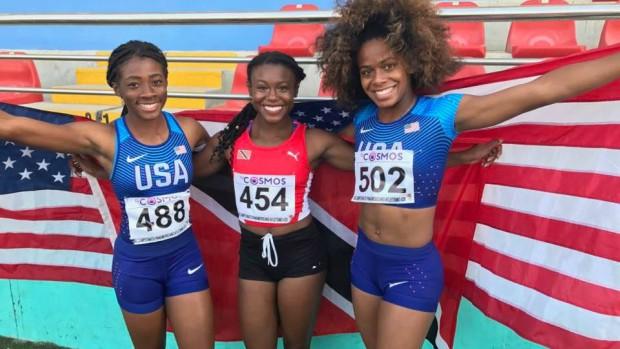 Trinidad & Tobago's Khalifa St. Fort won her second straight Pan American Junior Championship 100m title. The sprinter, who lives and trains in South Florida crossed the line in 11.32s into a -0.3m/s wind. Rebekah Smith of the United States was second followed by Miami Southridge standout Symone Mason who was third in 11.62.

For St. Fort, it wraps up a stellar junior career and the best ever for her country. Her accolades include World Youth 100m silver medalist, World Junior 100m bronze medalist, 2 Pan Am Junior 100m titles, 3 Carifta Games crowns, 1 World Championship bronze medal, 1 Olympic final, and times of 11.06/11.19 which are national junior/CAC and national youth records.

Only seven juniors have ever run the 100m dash faster than St. Fort. An incredible feat, but now she has her eyes set on London and the World Championships where she will compete with her senior compatriots in the 100m dash and as a member of the 4x100m relay. Coach Ato Boldon says the duo will waste no time and head back to Florida to begin training.

Mason on the other hand still has two more events to contest in Peru. The 100,200, and 400m state champion, Dream 100 winner, USA Juniors 100m champion and 200m runner-up will race the 200 meters and the 4x100m relay with a chance to bring home even more medals before the weekend is over.

See what both St. Fort and Mason who have competed against each other many times throughout their running careers had to say after their race.