Winter Park's Kristin McWilliams is in her 17th season coaching and her 9th with the Wildcats. In the last five years, the girls have two runner-up finishes (2013, 2016) and three state titles including their most recent 4A crown in November (2014, 2015, and 2017). We caught up with Coach McWilliams to talk about her team's journey to the top of the podium.

In the summer and during season, we ran a lot at Clermont which is a 10 mile clay road of hills, surrounded by orange groves.  We don't race a lot so we can travel the 45 minutes there on Saturdays.  We missed a few Clermont runs due to the hurricanes but I realize every team had their own special challenges too! We also did tempo runs around Lake Baldwin, grass mile repeats, a very challenging cut down of 1.5 miles, 1 mile, 800 and 400 and various other specific and unique workouts.

We had a lot of adversity before and during the season, but the girls and I truly believed they could win and would do their best to make it happen.  The team really bonded this year and believed in each other and in me.  It was truly the most special State Championship, I have been a part of. 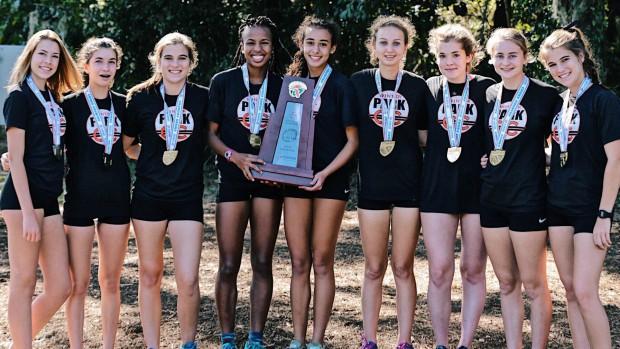 My sister Kathy, a former runner for the dynasty of HB Plant High School, texted me on the Monday before State and told me to tell the girls, "Some people wish it would happen, some people make it happen...girls, MAKE IT HAPPEN."  I told the girls that we had battled so much adversity that no matter what the result, I would be proud of them.

Run with no regrets and give their best effort.  In the words of Coach Mary Terry (former BK State Championship coach), "Control the controlables." The girls this year are incredibly close and truly ran for each other.

All seven athletes ran awesome!  Our number two runner from the beginning of the season, Junior Jennifer Coddington, missed 6 weeks due to a stress fracture and cross trained harder than anyone I have ever coached.  She ran on land only a few times and also on the Alter G treadmill 4 times before the State meet.  Her bravery and confidence inspired her team mates and she finished as our number 4 runner. 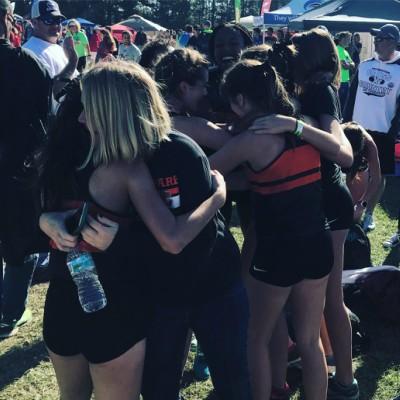 Senior Melanie White had her best performance in 4 State CC meets and along with Rafaella Gibbons has been instrumental in 3 State Championships and a Runner Up in the past four years.  These two amazing athletes lead both through example and through inspirational words.  With 4 of the top 7, never running at State or on the State course at all, these two Captains (along with Jenny Coddington) really had a feat to keep the others, calm and confident before State!

Freshman Emma Noel broke 19 minutes several times and was our number two or three runner all season. Her confidence, fearlessness and tenacity pushed the other girls throughout the season and she battled at State on a day where she was not feeling her best.

Sophomore Grace Adams was our number 12 runner last year and dropped from a 21:31 last year to a 19:52 this season! Her work ethic and quiet competitiveness pushed her training group, who interchanged between the number 4 to 8 spots all season.

Sophomore Lindsey Hunter, a former WPHS volleyball player, joined us and was born to run! She almost passed out at several races this season, but once we got her blood sugar fixed, she started excelling and will be a force to be reckoned with this track season and in future years.

Junior Courtney Coddington left the WPHS State Champion Crew program to join in the fun with her twin sister Jenny, and had a huge impact as a key scorer in several championship races.

We only graduated 3 out of our top 12 last season, however, we lost an additional 4 athletes, one to an out of state move and several to medical issues.  I really strive to keep the girls healthy but we had Jenny get a stress fracture (a common injury but not on our team), blood sugar issues for Lindsey.  One of our athletes even stepped on glass in her kitchen as a result of her dog knocking over a glass.

The girls were a little panicked with the never ending adversity and were very nervous. It was the job of our coaching staff to keep them all calm, confident and to encourage them to believe that everything would work out.  When the glass incident happened Coach Colgan half-jokingly suggested we wrap the girls in bubble wrap.  I felt the same way but could not let the girls sense my own fears.  Instead, we pulled girls aside for pep talks, and continually reassured them that we only had to put everything together on November 11th. 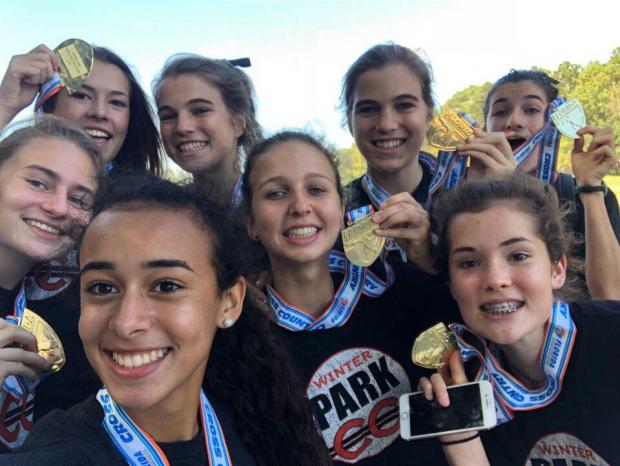 I knew the girls had the potential during the track season and summer. I place a huge emphasis on the track season and my love of the sport becomes contagious! It is a very important component of our overall program and college coaches look at track times! The girls put in a lot of hard work in the summer and throughout the season.  The week of District, I encouraged the girls to really get out and race, I felt they were not truly racing their competition and but instead were just racing each other to keep their top 7 spots.  They rose to the challenge and it laid the ground work for the remainder of the season.

I coach the most amazing group of athletes! They are hardworking, driven, intelligent, coachable, fun, caring, witty, silly, funny, sweet, talented and all around phenomenal young ladies.

Tracy Nolen Bruce and Rick Colgan are the GREATEST assistant coaches.  They help me juggle a massive JV team and keep me sane. Both are knowledgeable, hardworking and funny!

I am hard working, driven, intense, dedicated, friendly, goal oriented, caring, and (sometimes) funny.  I don't have my own children (besides my golden retriever) so I consider my athletes my children and strive to be the best role model that I can be. 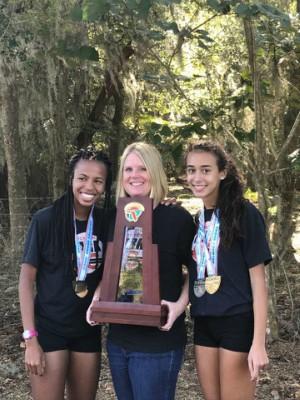 The impact of Rafaella Gibbons over the last 4 years had been immeasurable. Even as a freshman, Rafaella showed leadership qualities through her incredible work ethic, attention to the little details, commitment to excellence, humbleness, kindness and so much more. Words cannot express how much I will miss her next year but she has such an incredible college and professional career ahead!

Senior Melanie White also was a key leader who like Rafaella works hard, listens and inspires her team mates.  Both seniors served as role models for their team mates and encourage them to give their best effort on a daily basis and trust my training plan.  I will miss Melanie's unique sense of humor and intelligence, but know she will do great things in college and beyond.  Even though she was not an official captain, Junior Jennifer Coddington served as another key leader.

Sophomore Grace Adam worked incredibly hard to improve her spot on the team from our number 12 runner (21:31) last year to a top 7 member (19:52).  Her tenacity, quiet determination and tire less work ethic led her to be a key member of our team.  Sophomore Stephanie Dietz dropped over 3 minutes from her freshman campaign to earn an alternate spot.  I expect big things from Steph who will run her first official track season this spring after she concludes her WP soccer season.  She will be a crucial member on next year's squad!

Our 2014 team was our fastest team with 4 runners in the top ten (in the 17s and 18s) but this team may have been our most resilient team.  They overcame the nonstop adversity with a positive attitude and a fierce determination. I am super excited to return the majority of the team next year.  Given their high talent level and work ethic, they have the potential to be one of the best teams in school history and in the state. 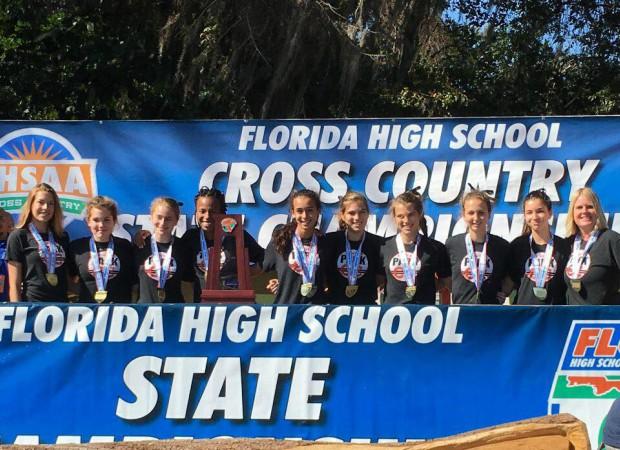 Each championship team is unique and special.  This year's team has incredibly chemistry and truly loves each other.  They work incredibly hard but have a blast doing it.  We all laugh a lot which makes it much easier to tackle difficult workouts.  I am so appreciative for such a phenomenal group of athletes, coaches, parents, Principal Smith and Athletic Director Michael Brown.  I am truly blessed to have the best job in the world.

We return 7 of our top 9 athletes so I hope they can contend for another State title.  Regardless, we will work hard, and give our best effort on a daily basis! First however, we have a lot of work and lofty goals for the track season ahead.  Good luck, run fast and have fun!