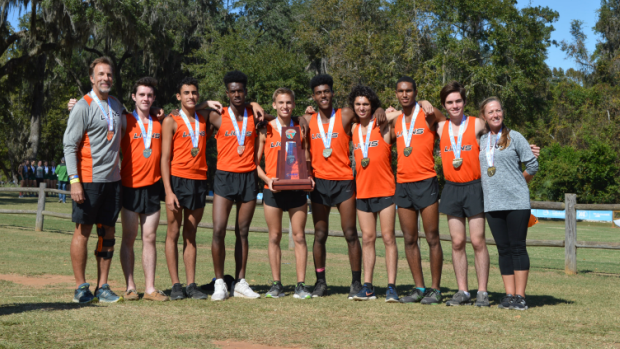 Coach Dave Tibbetts is only in his second of year coaching. Tibbetts was an assistant at Oviedo High School last season before becoming the head coach in 2017. In his first go round at the helm, he guided the Lions to their first cross country state championship in school history. We talked to him about the journey of this year's team, expectations for next year's squad, and much more.

We began our taper the right after districts. We still hit the speed work pretty hard two days a week, but the total milage dropped way down.

The guys did not run nearly as well as they knew they could last year at state. Their goal was a championship from that day forward. Even with coaching changes during the year, the guys stay committed and focused. There was no doubt in my mind they would win the championship this year.

We knew Steinbrenner, Newsome and St. Thomas were running really well. We used that to help us focus on the work we needed to get done. We had a plan and just needed to stick to it.

The plan was for Kayamo Galloway to get out with the race leaders, then have Tyson Harper, Angel Vicioso and Mamush Galloway pack up. They executed flawlessly.

Without a doubt it was Jaedin Doddapaneni. He gave us a monster P.R. at state.

The team had been ranked #1 since around June. That came with a lot of distractions. Lots interviews, TV coverage etc. The guys did a fantastic job of remaining focused and committed. Tyson Harper and Kayamo Galloway were plagued with injuries for much of the year and in Tyson's case it really set him back. Fortunately they were able to rehab enough to get through the season.

There were no low points this season. The team grew with each race.

There were several points during the year where we knew we were ready. We did some 1K/200/200 repeats about mid way through the year. It was crazy hot  and they absolutely crushed that workout. That might have been their best workout of the year and they looked like they were ready for state right then and there. Their dominance at districts was a clear signal they were ready to take state.

They're simply THE BEST! Paul Brown was our head coach last year and had to relocate. Paul is an amazing coach and it was devastating to the kids and our program. When I was asked to take on the head coaching position, they entire team welcomed me and helped me become a better coach. I will never forget what this team did for me and our program.

It's simple. This year would not have been possible without my wife, who is also our assistant coach. She's also a former cross country runner, so she understands the obstacles these kids need to overcome to be successful.

I try to stay relaxed. I feel the kids respond well when you explain what the workout is and why you're doing it. But, of course, every now then everyone needs a good butt kicking!

Our captains this year were Tyson Harper and Ethan Fields. Two of the finest young men you will ever meet and naturally gifted leaders.  Both are Seniors and we miss their leadership next year.

Again, I'd have to go back to Jaedin Doddapaneni. His running this year just went to another level. He stayed healthy all year and each week just kept improving.

Really easy question to answer since I've only been coaching at the high school level for 2 years. The BEST!

This is a very, very close group. Some of these guys have been running together since slementary school. I was a volunteer coach for some of them in middle school as well. There is a very special bond with this team.

REPEAT!  We lost four seniors from the State Championship team, but we have Angel Vicioso, Mo Galloway, Kayamo Galloway and Jeff Metz all returning. We've got several guys ready to go to fill in gaps left by our Seniors. I absolutely believe the Lions can make the podium again next year.