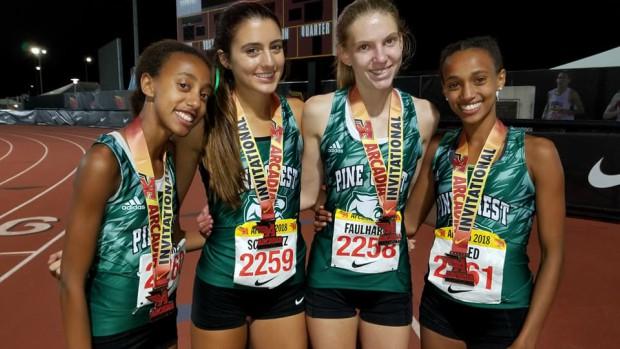 The Pine Crest girls are the defending 2A Cross Country Finals state champions and boast the deepest squad in the state when it comes to the 1,600m. The Panthers decided to test that depth in the 4x1600m relay, an event they ran once this year, but is rarely contested in the state of Florida. The destination? The Arcadia Invitational in California and some of the best distance teams in the country including Great Oak High School.

"We felt after Nike regionals and missing an at large bid we needed to build our national resume as were unknown on the national level," said Head Coach Paul Baur. "Plus I met Doug Soles at a conference a year ago and we have just been talking and he's always said bring your girls out to Arcadia to come race us. We felt it would be great to run the relays as we always run 4x1600 and DMR at our Panther relays and try to improve our school record."

The quartet of Amanda Schwartz, Mahdere Yared, Emily Faulhaber and Tsion Yared, not only flexed their muscle and represented Florida, but proved they belong with the nation's best. The Panthers finished second behind Great Oak in a state record and US#2 time of 20:24.73. The mark was also the 13th fastest ALL-TIME in the U.S. and a school record by 40 seconds.

I was very proud of the girls," Baur said. "They felt very out of place and a little intimidated, but Great Oak was very welcoming. They all raced very smart and set each other up perfectly and gave Tsion a chance and she finished it off."

Amanda Schwartz kicked off  the race by navigating her way through 20 runners and avoiding collisions as she split 5:12.5 and handed it off to the youngest Yared, Mahdere who split 5:06.5 and put the Panthers in even better position heading into the final exchange. Emily Faulhaber, the school's third leg moved up to 4th, with a negative split in the 800m. Then it was in the hands of two time Cross Country Finals state champion Tsion Yared.

"On the final leg of the relay, it was a battle of State Champions as Tsion Yared got the baton even with the 2017 California Div. 1 XC State Champ and went at it with her for 3.5 laps before Tsion's kick was too powerful," Coach Baur said. "Tsion out sprinted her on the last lap with a 70 second split and overall time of 4:54.5 to secure the runner-up spot behind Great Oak of CA!"

Baur went onto say just how special this group of girls is and what this performance means to the program and the school.

"Being nationally ranked gives them motivation to continue to want to improve and compete against the best," he added. We are all very thankful for the support of Jeff Johnson, our AD, and our entire administration.We want to continue to give these girls all they need to continue to get better and reach their goals as PC students and to be able to continue to run in college."

Maya Beleznay of Pine Crest competed in the Rated 3,200m race and finished in 11:28.62. The Pine Crest girls will also compete in the DMR Saturday night. Other Floridians slated to compete this weekend are Syracuse signee Michael Phillips and FSU signee Matthew Newland of Chiles as well as Bolles junior Charles Hicks in the invitational 3,200m.