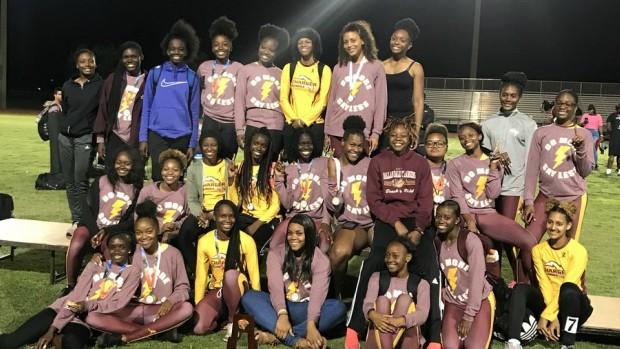 When your district meet consists of American Heritage HS, Hallandale, and Pine Crest HS there is no jogging to advance to Regionals. This district put on a show for Florida and it was led by a team sweep on both sides by the home team, Hallandale.

On the girls side it was the field squad that led the way for the Lady Chargers, as the throwers swept the shot put and discus. Led by FSU signee Amani Heaven, the ladies showed their dominance as they will be joined at the Region meet with three qualifiers in the high jump, triple jump, and long jump.

On the track the Lady Chargers qualified 3 of 3 relays, as they won the girls 4x800 and had runner up finishes in the 4x100 and 4x400. In the individual events the Hallandale ladies were led by unsigned senior Sydney McGinley who posted a top hurdle time of 13.7 in the 100m hurdles.
If it wasn't for American Heritage's Asia McMillon (2nd in 100m hurdles and 1st in 300m hurdles), the Chargers would have swept both hurdling events. Senior transfer Nia Lecky showed true form squeezing in both sprints as she finished fourth in the 100 and 200 meter dash, to break up the American Heritage HS sweep.
On the distance side the ladies of Hallandale took 1st and 3rd in the 800 and broke up the Pine Crest sweep in the 1600 taking the 4th qualifying spot. Yet the Pine Crest girls swept the 3200 as Tsion Yared led the way by winning the 1600 in an impressive time of 4:52.84 and then came back in the 3200 to take the win too.

On the guys side it was the combo of Anthony Schwartz-Shaun Shivers-Tyson Campbell to lead the way in the 100 and 200 meter dash. Yet the Chargers boys got a key victory in the 400 meter dash as senior Peter Anderson took home the win with a time of 47.85.
On the field side of things it was the recent FSU signee, Milton Ingraham, who led the fellas by winning the shot put and the discus. Hallandale was also paced by their relay teams winning the 4x400 and 4x800, with a solid runner-up in the 4x100.