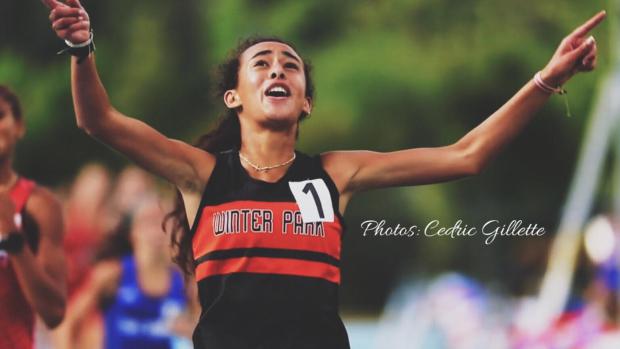 Michael Gibbons is the father of Winter Park alumna and current NC State athlete Rafaella Gibbons. Gibbons won the 4A Cross Country State Finals in 2014 and ended her high school career recently with a state championship in the 1,600m run and was a member of the school's state winning 4x800m relays over the years as well as cross country podium finishes.

The subject of the frequently observed (but infrequently discussed) decline in performance over time of the female high school distance athlete is one that touches a great number of athletes, coaches and parents each year. In the hope of stimulating some discussion of the difficult subject, I want to share some personal thoughts and history (all reviewed by my daughter) in the hope that the discussion may prove helpful to other parents and female high school athletes.
It is a fact that many (though certainly not all) female high school distance athletes experience a period of time when their performances as an upperclassman slow when compared with their underclassman performances. Rafaella's success as an underclassman ensured that her struggle with this common phenomenon would play out in a more public and obvious fashion.
I remember a meet at Bolles during Rafaella's Junior year. There was a typically fast field assembled for the 1600 race in early March. The coaching, preparation and competitive spirit were all present as before but her new body was not ready to perform as it had in the past and she went backwards in the final 200 meters. Shortly after the race, Rafaella was sobbing on my shoulder. She was so frustrated and discouraged that she tearfully expressed, "I can't do this anymore!".
As a parent it tears your heart out and leaves you feeling helpless to see your child suffering so much from a sport you know she loves dearly. Suffice it to say that after sophomore year there were a number of races that left Rafaella feeling frustrated and disappointed as she found herself unable to recapture her former form.
As a parent, this was all unexplored territory with no maps available for help navigating the frequently dark and difficult terrain. With her high school career now over, it seems like a good time to try to offer an informal Parent Survival Guide for parents of female high school distance runners.
1. Keep it fun. Your daughter won't be running PR's each week and winning every race. Encourage her to focus on the journey, the daily practices with coaches and teammates, the shared grind, the road trips, the team meals, the team friendships. These are the critical relationships and experiences that serve to create lasting memories and foster joy and fun (along with the workout pain and burn). They will give your daughter balance and support over the inevitable highs and lows of the sport.

2. Avoid comparing the mature athlete with the immature athlete. Underclass females have been described by some as "lungs with legs". When you weigh 100 pounds soaking wet, it doesn't take as much cardiovascular development to power you over the XC course or track. As boys mature and their bodies produce more testosterone, they naturally develop more speed and power and their times typically drop year over year through high school. As girls mature and their bodies produce more estrogen, they naturally add body fat and the same amount of aerobic development/training regimen imposed on the heavier body will produce slower times. Help your daughter understand and celebrate the body changes as a necessary phase of development that serves to strengthen bones, reduce injuries and permit a higher training volume. Remind your daughter that the fastest women in the world are not pre-pubescent teens but fully grown and mature women. In high school, it can be easy for our girls to lose sight of this fact.

3. Stay positive. When declines in performance manifest, continue to offer encouragement and support for your daughter. In Rafaella's case, credit goes to Coach Mac for being consistently positive and encouraging of Rafaella even when she was struggling. Parents and coaches should be on the same page looking to build the athlete up and keep their spirits high even when the stopwatch says you're running slower.

4. Check the iron. Between menses and hemolytic loss of blood due to repeated foot strikes, your more mature daughter is losing iron each month. Iron in the blood delivers oxygen to the working muscles and an adequate amount of iron in the blood is essential to optimum performance in the distance events. Try to establish a hemoglobin and ferritin baseline when your daughter is running well and feeling good. Try to have her doctor order a blood test including a serum ferritin test at the start of each season and before summer training block. Recognize that what many doctors consider normal and healthy may not be adequate for female distance runners. You don't need a ferritin level of 60 or higher to be a healthy adult female but college coaches like to see their female athletes at such levels. Obviously, too much iron can be toxic so you need to monitor iron supplements and don't fall prey to more is better.

5. Check the hips. During summer training after her Junior year, Rafaella was struggling with a recurring hamstring issue that was affecting her training. I took her to an orthopedic who took an X=ray which proved negative. He referred Rafaella to a Sports Physical Therapist to address the hamstring pain. The Sports PT turned out to be very knowledgeable and immediately identified a weakness in her hip (one side more than the other) that caused subtle form compensation and led to hamstring soreness. The PT recommended a series of exercises for Rafaella to perform at home that over time strengthened and balanced a weak and imbalanced area of critical import for running form and economy. You don't need to see a PT though to find help on the hip issue. Coach Jay Johnson has a great video online demonstrating various hip related exercises for the female runner. Just Google "Coach Jay Johnson myrtl exercises" and you'll find the free instructional videos. Twenty to thirty minutes 3 or 4 times per week will help to strengthen a frequently neglected area of weakness for the female high school distance runner.

6. Pray a lot. Pray for patience for your daughter. Pray that she doesn't succumb to the siren song of an eating disorder in order to lose weight and drop time. Pray that the fire of passion and love for the sport that animated your daughter in earlier times continues to burn during down times, however diminished, waiting for the moment when coaching, preparation, desire and opportunity combine to reignite the flame.