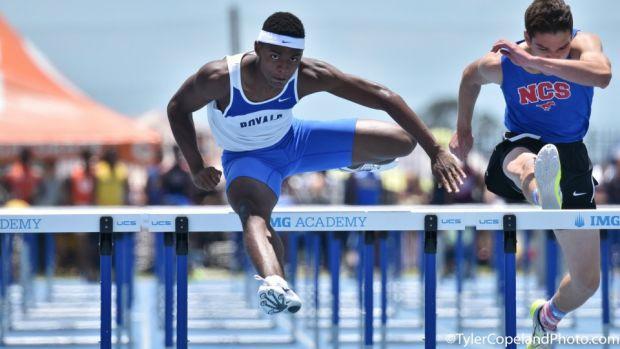 (Alex Shields of The First Academy seen here at the 2017 FHSAA State Championships, is one of the top seeds in a loaded boys 110m hurdle field.)

The 2018 Flo Golden South Classic kicks off Saturday and is expected to provide fireworks in every event top to bottom. Whether it's new personal bests or nationally ranked marks we break down the key boys athletes in every event in the classic division.

Apopka senior Saypadia Desaussure comes into the meet with previous Golden South experience. He ran a personal best of 10.48 in the prelims last year, and recently was 6th at the 4A state championship in a season best mark of 10.69. Jevon Weller of Nansemond River (VA) is the 2016 5A/6A Virginia state champion and ran 10.78 at the Bullis Bulldog Invitational earlier this year. Others to watch include Trevon Thompson , Jordan Booker, and Morgan Jamison.

Jordan Booker of Humble High School in Houston, Texas is the top seed in the boy's 200m dash. He finished no worse than fourth in all of his 200m races this season and was third at the UIL Track and Field Championship with a time of 20.94. He owns a wind legal best of 20.70 from the UIL 5A - District 21-22 Area Meet where he was runner-up. Martin County's Morgan Jamison is also entered in the 200 and is a definite threat to take the title. Jamison went virtually unknown most of the season, but made his mark on the postseason winning districts, regionals, and finishing as the 4A runner-up two weeks ago in Jacksonville. Treyvon Williams of Palatka was 4th at state in 2A.

Jamison returns in the full lap 400m. He was the district and regional champion and finished 4th in 4A at the state meet with a personal best of 47.26. Is their anyone more red hot than the Martin County standout right now? Treyvon Williams ran a new personal best at state as well in the 400m with a time of 47.56 to take third. Jamison and Williams are the top two seeds in the field and along with Jameson Miller are the only three athletes to have run under 48 seconds in the event this season.

The boys 110m hurdles race may one of the best races of the day on the boy's side with 4A state champion Wavell Hinds of Northeast leading the way. Hinds had a breakout race at the Florida Relays running 14.04 in rainy conditions to set a new personal best and get the win. He told me after that race he was trying to get the respect of college coaches. He ran a wind-legal 13.91 to win regionals and a slightly wind-aided 13.90 (2.4 m/s) to win the 4A state championship. North Carolina will send one of their best hurdlers in Joshua Brockman who has run 14.12 this year and ran 13.96 in 2017 to win the  USATF National Junior Olympic Track & Field Championships. Jermanie Byrd of St. Thomas Aquinas was one of the favorites in 4A at the beginning of the season and ran sub 14 at Sam Burley before cutting his season short. It will be interesting to see what kind of shape he is in on Saturday. Another out of state talent, who could contend for the win is Daiqwuan Faircloth of Nansemond River (VA) or Team WAR which boasts nationally ranked hurdle talent year in year and out on both the boys and girls side. Faircloth was third at last year's VHSL Group 5A/6A State Outdoor T&F Championships and ran a personal best of 14.02 at New Balance Nationals last year. Rounding out the top competitors is Alex Shields of the First Academy. It's hard to not put him at the top of this list. After all he is competing on his home track and all the kid does is win. He won the middle school hurdles as an 8th grader and followed that up by sweeping both the 110 and 300m hurdles in class 1A as a freshman and as a sophomore. He was second in the long jump in 2017 and won the event in 2018 showcasing his pure athleticism.

It's hard to gauge the talent of the 400m hurdle field because not many athletes have run that distance, especially Floridians. Jaylyn Scott of Bainbridge, Georgia has the fastest 300m hurdle time in the field at 37.29s, a one second personal best from their recent 5A/6A state championships where he took home gold. Elisha Brooks of Brophy College Prep in Arizona, the same school that produced Devon Allen, is entered in the field. Brooks was runner-up at the AIA Division 1 State Championships in 2017 and followed that up with a win at the Arizona Meet Of Champions in a PR of 37.45. He was 12th at the Great Southwest Classic. Jabari Bryant of Rickards will be joined by several of his high school teammates at the meet this weekend. Bryant is having a spectacular season finishing third at Bob Hayes, runner-up at FSU Relays, winning districts, regionals, and earning a runner-up spot at the state meet. Others to watch include Jermanie Byrd of St. Thomas Aquinas and Daiqwuan Faircloth of Nansemond River (VA).

The distance event on the boy's side I am looking forward to most is the 800m run. Fresh off a US#6 mark of 1:51.00 Joab Francois of Lake Brantley committed to the Golden South field. Francois was the 4A runner-up at the state meet and will get one more shot to prove he deserves to be in the conversation with the state and nation's best two lappers. Zach Burnett of Georgia is trying to return to 2017 form where he was third at the 5A/6A Georgia State Championship and ran a personal best of 1:54.73. Micah Hilliard of Suwanee was sixth in the epic 800m run at FSU Relays and set a PR of 1:54.80. Garrett Ricardo of Flanagan is another athlete under 1:55. He ran 1:54.87 to finish runner-up at the BCAA Championships. Look for this one to go out very fast and a lot of these guys to set new personal bests.

Of all the entrants in the field nobody may have traveled farther to Flo Golden South then Habtamu Cheney of Desert Vista High School in Arizona. Cheney is a stud distance athlete with personal bests of 1:56.73 (800m), 4:14.62 (1,600m), and 9:10.89 (3,200m.) Cheney is entered in all three events at Flo Golden South. He is a two-time state qualifier in both the 1,600 and 3,200  events and was recently third in the 1,600 at the Arizona Meet Of Champions. In the one mile run, Cheney has the fastest time in the field, but Onix Ortiz of Windermere High School ran sub 4:20 to win his district meet, and Joshua Williams ran 4:21.45 and was part of the Hilton Head DMR at Florida Relays. Sarasota junior Ben Hartvigsen is also entered in the field and is the 4A Cross Country Finals champion. Hartvigsen was fifth at state in a personal best of 4:22.52.

Much like the boys 1,600m, Cheney is the favorite in the boy's 3,200m with his 9:10.89. The field is rather slim in this race, but their is quality with the likes of Jake Turner of Armwood, Troy Smith of Rockledge, and Aidan O'Gorman of New Smyrna Beach.

I'll be honest I didn't know a ton about West Orange junior Russell Robinson this year and when he won the long jump at Florida Relays I had to find out more. He proved that 23+ jump wasn't a fluke as he continued to dominate the postseason winning districts, regionals, and the 4A state championship. He is knocking on the door of 24 feet as is is closest competitor Queshun Watson-Riggins of Sebastian River. Watson-Riggins, an FIU signee, is the 2017 and  2018 2A long jump and triple jump state champion. He was second at last year's Flo Golden South Classic in the long jump and won the triple jump. Also keep an eye on Dalin Thomas of St. Thomas Aquinas in the triple jump.

The boys high jump is one of the deepest field events of the day. Shaun Miller comes from the Bahamas with a best of 6'11" from the 2017 IAAF World Juniors in Kenya where he was fifth. Miller is the younger brother of Olympic gold medalist Shaunae Miller who trains with the Pure Athletics group in Clermont. Challenging Miller will be Israel Diaz of Citrus High School. The senior was the 2017 2A state champion and finished 4th at the state meet this year. He's jumped 6'10 so it's not out of the cards to see the field push seven feet. Sundi Washington of Rockdale Co. Georgia was 2nd at the Georgia state meet and has jumped 6'08.

The entire boys pole vault field has cleared 14 feet and of those only two have cleared 15 feet, Rohan Kaushul (15'01"), and Austin Thompson (15'09"). Stone Baker of River Ridge is the top seed and current state leader at 16'04.75". Baker finished first in every meet accept the FSU Relays where he was third and won the first state title of his high school career. He was third at last year's Flo Golden South Classic. Thompson is red hot as well. The senior and UNF signee was nearly perfect as well on the season including a 4A state title. He finished 7th at last year's Golden South.

Springstead senior Kyle Manuel and Sebastian River's Tim Smith are cut above the rest of the field in the boy's shot put both going over 50 feet. Manuel finished sixth at the 3A state meet and has a personal best of 54'1.5" while Smith, only a sophomore, was 10th in 3A. Those two will go head to head in the discus as well where Manuel has a best of 175'09" from the state meet where he was 4th and Smith counters with a 171'0. The wildcard will be Buchholz's Derek Akey, the 4A runner-up who has thrown 181'07 and could push this group to a new set of bests.