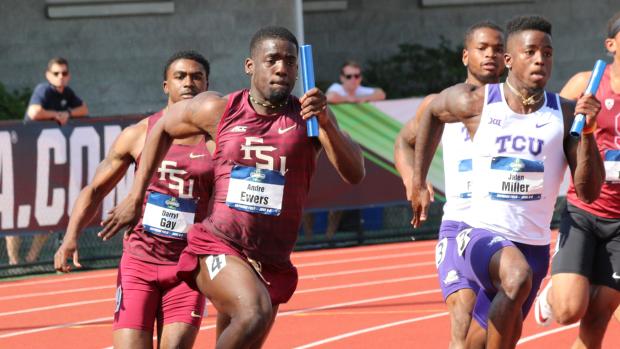 EUGENE, Ore. - Austin Droogsma put the Florida State track & field team on the scoreboard Wednesday at the NCAA Outdoor Championships, but there will be plenty more points coming on Friday, thanks to an outstanding qualifying effort by the Seminoles.

And if the opening day performances at Historic Hayward Field are any indicator, the finale at this iconic venue will be a fitting sendoff.

Droogsma fell victim to some of those early-meet histrionics as the senior climbed to third entering the shot put finals with a throw of 20.23 meters (66-4.5) - the second-best of his career - and finished seventh when he was unable to improve on that standard.

"That would have been third last year," Droogsma said of his mark. "I knew that it could very well be a 20-meter final. It turned out to be that way. I figured it would get top-five, at least, but sometimes that's how the chips fall.

"It's disappointing to get all the way here and not really have the placing that I was really looking for, but I threw within 98 percent of my PR. It was just a stacked, really, really deep field. It took 20 meters to score. That's just the reality of the game sometimes."

Quality performances were not reserved solely to the big men in the circle. Fortunately for the Noles, junior sprinter Andre Ewers cast a huge shadow over his fellow 100- and 200-meter dash qualifiers.

Ewers posted the fastest qualifying time from the field of 24, advancing to the finals of the 100 in (10.00w) as the No. 2 seed, on a day when top-seeded Jaylen Bacon of Arkansas State (10.10) did not make the final. Nor did Purdue's Waseem Williams (10.06), who was fifth behind Ewers' heat three victory.

Seminole Darryl Haraway finished 15th out of the preliminary heats in 10.15; the second-fastest time of his career.

Like the shot put, you can go all the way back through the 2000 preliminary rounds in the 100 and not find a faster field 1-16 than Wednesday produced.

As the No. 1 seed in the 200, Ewers completed his busy day by qualifying fourth-fastest for Friday's final in 20.31; a solid cap to a taxing three-event day which began with anchoring the Noles 4x100 relay to the final

"Endurance-wise it wasn't that tiring," Ewers said, afterward. "Legs-wise, it took something out of me because in the 100 I got left out of the blocks and I was fourth or fifth and had to make up ground to come back.

"The high level of competition makes it more difficult."

Ewers and Southern Miss' McKinley West were the lone sprinters to make the finals in the 100 and 200, and also lead their 4x100 relay to the finals.

Competing in the first heat of the first event on the track, the Seminoles' 4x100 relay of Keniel Grant, Haraway, Darryl Gay and Ewers automatically qualified for Friday's final in a season-best 39.00 seconds.

"It feels real good," said Grant, a senior competing in his first NCAA Outdoor Championships. "The goal was just to survive and advance. We just got the stick around safely and we're going to finals."

The Noles' time is the eighth-fastest in program history, though it was far from a flawless performance, which is even more encouraging enter the final. Despite a less-than-fluid pass from Haraway to Gay, Ewers received the stick in the mix and easily motored from fourth to first for the heat win and the auto berth.

Gay, a freshman who was reinserted into the lineup for the first time since the ACC Championships, was equal parts excited and relieved.

"I'm very excited to see that we could go 39-flat with me taking off early and having to stop and get the stick," Gay said. "But we got the baton around safely to get to the finals so we can take it all the way home to Tallahassee."

Freshman Trey Cunningham joined Ewers and the relay team among Friday's finalists, overcoming a sluggish start with a strong close to run his way into 110-meter hurdle finals on time in 13.64.

Like Haraway, graduate transfer Kenneth Fisher was forced to settle for second-team All-American honors with his 16th-place finish in the long jump (7.65m/25-1.25), another event which brought out the best from the field.

"Overall it was a really good Day 1," FSU coach Bob Braman said. "Droogs fell victim of the best shot put competition in NCAA history, but those two points are huge in a meet of this level. That was just an awesome triple by Andre. That's a big man with a lot of moxy.

"We'll need another season-best in the 4x100 relay if we're going to crack the top five, but they over-achieve every time out. Top-10 is achievable for us, but we need another big day on Friday."

Before the 10th-ranked men return to competition, the 26th-ranked Seminole women take the stage for the first time Thursday.

The action begins at 7:02 p.m. (ET) on ESPN2 with the women's 4x100 relay, anchored by freshman Ka'Tia Seymour, who will try and duplicate Ewers' triple with semifinals in the 100 and 200 as well. Cortney Jones (100 hurdles), Lauri Paredes (javelin), Gleneve Grange and Ieva Zarankaite (shot put) and Militsa Mircheva (10,000) will all line up against the nation's best.

You can follow the action throughout the day via Twitter @FSU_Track and stay abreast with live results at noles.co/2xNZteR.