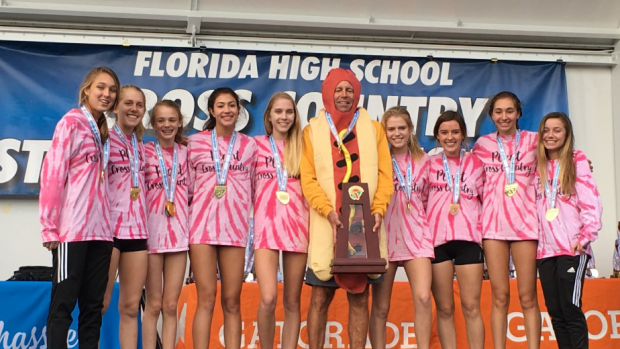 If your coach agrees to dress up like a hot dog if you win the 4A team state title, what do you do?

Well, you win the team title of course.

The HB Plant girls went out in style this past weekend capturing their eleventh state title, with their Coach, Roy Harrison, dressed like a hot dog to accept the award with his team.

The Plant girls won the 4A team state title with a 19:24 average, with freshman, Mary Ellen Eudaly, leading the way with her eighth place finish of 18:29 in her first high school state final.

Eudaly had a breakout race for her first race as a Plant Panther, winning the B3R Sports Invitational in a time of 19:04.

The Panthers are made up of a young squad, with no graduating seniors, and all of their top five athletes sub 20:15 for the 5k. What is more impressive, is the Panther's ability to perform when it counts -- to have a strong progression week after week and compete as a team.

Freshman, Arlie Rubin, ran a 20:13 at the B3R Sports Invitational and this past weekend she improved her time by over a minute, running a 19:10 to place second for her team at the State Finals.

In her first season for Plant, Lily Fitzgerald, took her time from a 23:33 to a 20:13! As a sophomore, we can expect to see a really strong progression from Fitzgerald as she heads into track season and gets some more summer miles under her belt.

With sophomore, Hartley Hill, her improvements were very similar. She dropped nearly 40 seconds off her season opener time to her district time -- running a 20:09 at the 4A district 6 meet.

The eldest on the team: Olivia Manno and Alixandra Rubin, had very consistent seasons as well with Manno finishing third for the team in a PR of 19:11 and Rubin finishing with a time of 21:06.

Sara Webber stepped it up for the Panthers at the state meet. She finished fourth for the team in a huge PR of 19:54! Her first race of the season was a 21:55 and week by week she moved that time faster and faster.

The smooth progression of these athletes and their ability to work as a team, is what makes the Plant girls such strong competitors.

With FHSAA hall of fame coach, Roy Harrison, it comes to no surprise that these ladies are as talented as they are.

The History Behind The Plant Panthers

Since 1991, the Plant girls have been a force to be reckoned with. Coach Harrison captured his first team state title for Plant back in 1991, and this weekend he extended his record and became the top girls coach with the most state team titles for one team.

Coach Harrison also ties for the fifth team score record for Plant with the 1995 squad winning the 5A state championship in 27 points!

As a public school program, you never know what athletes you will get year after year. You can't predict the talent in the area, till you get with the team and train week after week. Coach Harrison has a gift to take these young athletes and shape them into strong competitors at an elite level.

With two freshman, three sophomores, two juniors, and future middle school athletes that will join the squad, we can always expect the Plant girls to progress strategically and give it their all when it comes to running for another team state title.