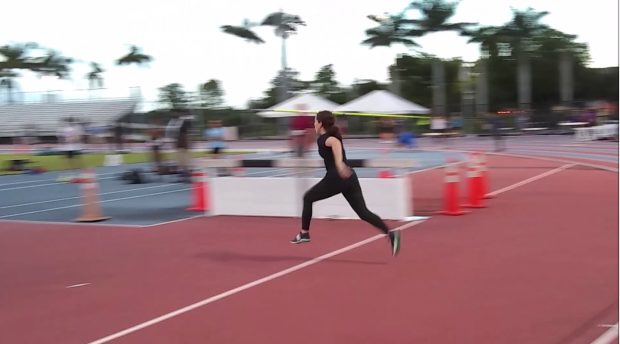 Florida's 2016 and 2017 4A Runner-up in Discus and All-American Javelin thrower, Sophia Gustely, talks about taking a Gap Year. For her 2019 season she will compete for Embry-Riddle University in Daytona Beach, Florida

Why a Gap Year?

Obviously, my decision to delay college was not an impulsive one. During your senior year of high school, there are immense outside pressures on your college decision and future path. My decision process began with gathering all available resources about the pros and cons of a Gap Year following high school graduation to achieve balance and arrive at what I believe is my best personal choice. I will try to explain the process I went through to help your readers and recruited student-athletes understand.

I enjoyed my senior year visits to the Naval Academy and West Point. Coach Bancroft at West Point is like Mr. Incredible. My sister Phoebe Gustely, stated in her 2015 exit interview with MileSplit, that "I might also have a shot at West Point in two years." In fact, I did. I received an appointment to West Point in 2017 for the class of 2021. Upon sitting down and talking it over with my parents, teachers, former West Point graduates, advisors and any resource I could get hold of for insight, I concluded that this was not my path. After declining my appointment, and with my parent's guidance and blessing, I chose to take a Gap Year, to focus on work and prepare myself for college elsewhere.

How did you fill your days in a Gap Year?

Contrary to the questions of which countries I planned to visit during my Gap Year, my parents firmly put down guidelines on what I should accomplish: Employment, Academics, Training, and Personal Growth. The first step I took following graduation was to secure a full-time position at Lowe's. My day began at 0430 with my parents who began second careers as teachers. We were out of the house by 0530 and all started work at 0600. My work day ended in the afternoon, taking the city bus home, doing chores around the house, and getting ready for the gym and training before my parents arrived home. I read a lot and took a Calculus class on-line to keep my mind sharp. A Gap Year can be travel, but in my case, financial freedom, training and personal growth were most important.

When did recruiting take off again?

Like my Dad, I decided to switch my focus from discus to javelin so I could continue to compete in college track and field. Unlike my Dad, who was self-taught in javelin, I have had the good fortune of absorbing his coaching expertise, and working with Paul Baur of Pine Crest who threw javelin for UF, Mike Brown, world record holder in the Masters Javelin Throw, and most recently Tom Petronoff, former world record holder and inventor of the TurboJav (my first javelin).
I began receiving letters again last fall, with former and newly interested coaches contacting me, particularly for javelin. The coaches I spoke with were courteous with no-pressure conversations. This might be an advantage to the student-athlete recruit in deciding to take a Gap Year; TIME.

Where did you train?

We do not have a consistent place to train in South Florida. Coaches Scott Sherrod and Val Abugattas of Calvary Christian Academy in Fort Lauderdale have built a brilliant hammer and discus throwing cage, shot put area and space to practice javelin. We help when we visit with my Dad coaching discus and javelin in return for the field time. They are wonderful people, and this helped me with a training location during my Gap Year. I was the two-time 4A FHSAA runner-up in the discus, and two-time MS State Champion.
In college, I am now throwing javelin and discus, as well as learning hammer with Jim Griffin (Broward Elite Athletic Club) and Reta Woodard, former national champion hammer thrower at Embry-Riddle Aeronautical University.

Will you compete with or against your sister in college?

Phoebe and I are teammates again. I committed in April and signed my National Letter of Intent with Embry-Riddle Aeronautical University in Daytona Beach, Florida. Embry-Riddle moved up form NAIA to NCAA DII status, so they have had to wait a few years to compete in a conference. Embry-Riddle won NAIA conference titles 2009-2015 and now the streak begins again.
In their first year, they won Conference Cross Country titles, Coach of the Year Honors for Coach Rosolino, Men's and Women's Track and Field Conference, and Phoebe won the Peach Belt Conference Freshman of the Year - Field Events Athlete, and Discus Title. I have set my goal to win the Freshman of the Year - Field Events Athlete, Javelin Title, and challenge Phoebe for the Discus Title.
We are excited and I know Coaches Rosolino, Hopfe and Harris are as well. Embry-Riddle has not had siblings on their women's team for a while.

What did you learn from your Gap Year?

I am grateful for the honors and support from Monarch High School teachers, coaches and administrators, to my sister Phoebe for gently showing me a path, and to my parents for allowing me to choose my destination.
My grandfather (92 years old) who lived with us for the past 9 years, is a former school administrator, teacher, coach, WWII veteran and all-around wise man. He knew how difficult my choice prior to graduation had been for me and my parents, and what my Gap Year might be like. He supported me every step of the way. However, it was my choice to take the Gap Year as well as my responsibility to see it through to a positive outcome. I am now 19, a bit wiser, purposefully directed, and ready to take on the next challenge.
Taking a Gap Year is not for everyone. Some athletes feel rushed to commit to a college or sign a NLI. Luckily, I had a strong family support system in place, and what I did not have financially, I developed a new support system through hard work. This provided me time and resources to make the best decision possible.