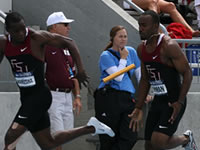 Check out this save that kept FSU in second place instead of fifth!

The entire meet came down to the final event of the day on Drake University’s campus as the Aggies needed to win the men’s 4x400m relay and did so. FSU boasted a lead entering the final day and registered 25 points to make the final moments all the more exciting.

The Seminoles finished with one more point than Florida’s 53.

“In terms of the meet, we competed better than any school in America,” FSU head coach Bob Braman said. “We got as much as we humanly could while we were here. In the end, NCAA runner-up by one point is pretty special and that’s extraordinarily special. We just need to find a way to be two points better.”

Despite a near-mishap with the exchange on the first handoff, the Seminole men got a huge boost early in the day with a championship performance in the 4x100m relay. Kemar Hyman, Ngoni Makusha, Maurice Mitchell and Brandon Byram generated 10 points with a 38.77 performance.

Just as importantly, Florida did not finish the race and therefore did not accumulate any points after the Gators, Seminoles and Texas A&M all came in to the final day in the hunt for the final team title.

For Makusha, the outcome marked his third overall championship of the meet after winning the 100m dash and long jump the day before.

Mitchell, who placed third in the men’s 100m dash a day earlier, then ran an incredible wind-aided 19.99 in the men’s 200m dash to win the first individual title of his collegiate career. His mark is the fastest wind-aided time in the entire world this year.

In the same race, Byram ran a 20.41 to finish fourth and garner the ’Noles a total of 15 points and extend the team’s point total to 54.

Unfortunately for the Seminoles, Ciaran O’Lionaird would then be unable to finish the men’s 5k.

“We got some world-class performances from Ngoni Makusha and Maurice Mitchell,” Braman said. “And all of our athletes competed well. I am just so proud of them. It was a great effort; we just didn’t have some of the guys healthy like Brian Chibudu, Charles Clark and Gonzalo Barroilhet that have been national champions and runners-up. You have to have all of those scorers here to get those one or two points. As we go forward, we have to get better and continue to find ways to score in other ways like in the distance events.

In the women’s events, the Seminoles’ 4x100m relay team of Amy Harris, Marecia Pemberton, Stephanie Simpson and Britany St. Louis finished sixth with a time of 44.09.

The FSU women’s team finished the NCAA Championships in 20th with a total of 14 points.

“The women’s 4x1 did a great job,” Braman said. “I thought Hannah Brooks did a great job and Kim Williams still got second place even though she has had an ankle injury.”