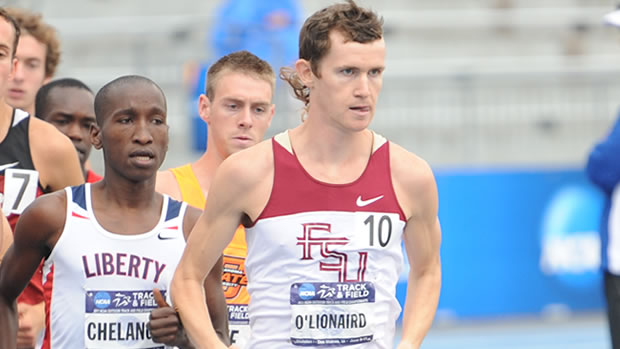 TALLAHASSEE, Fla. - Just shy of two months from his lowest moment in an otherwise outstanding senior season at Florida State, Ciaran O'Lionaird thrust himself onto the world scene in a hastily put together 1500-meter race in Oordegem, Belgium.

O'Lionaird's life changed the moment he cross the finish line, where the clock read: 3:34.46.

Not only did it earn the Irishman a spot in the Aug. 30 field heats of the 1500 at the World Championships in Daegu, Korea, it also gave him an Olympic A-standard qualifying time.

The Aug. 2 race in Belgium was the most recent impressive effort in a string summer performances abroad by the former Seminole star, who earned cross country All-American and Academic All-American honors this past season. It also distanced him from two days he would just as soon forget, when he failed to score in the 10,000 and 5,000 at the NCAA Outdoor Track & Field Championships, where the Seminoles came up one point shy of a national championship.

Despite a career filled with injury and illness - he struggled mightily with his breathing at the NCAA Championships - O'Lionard has emerged as the latest in a long line of outstanding milers from Ireland; a country which has produced well over 40 men who have crashed the 4-minute barrier.

With his sights now set on the World Championships and down the road to the 2012 Olympic Games in London, O'Lionaird took a few minutes to answer some questions via email about his spectacular performance in Belgium, his Florida State career and new-found place among Ireland's greats. He also candidly talked about bouncing back this summer from his darkest days at the NCAA meet.