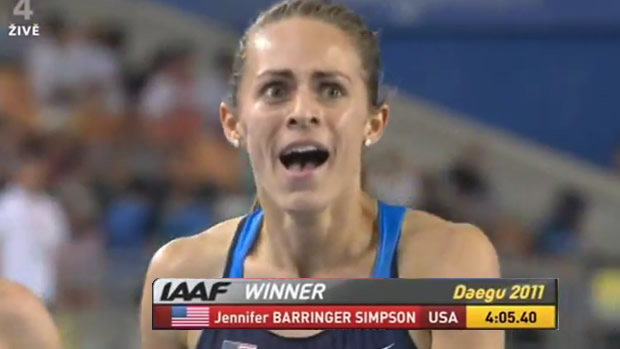 I guess we're supposed to call her "Jennifer" now... but she'll always been "Jenny" to us! It's with tears in my eyes that I am so happy to post the news that our hometown girl has done it! WORLD CHAMP!!!  We have seen Jenny go from promising freshman talent to two-time flrunners.com Invitational champion to state champion to NCAA Champion to Bowerman Award winner to American Record Holder to Olympian... to 2011 1500 METER WORLD CHAMPION!!

At the IAAF World Championships today in Daegu, Korea the New Balance athlete showed us a very patient and disciplined race. She went through the 700 meter mark in 11th place with a 1:58 split.  Then burried deep on the inside rail, she held her ground and managed to avoid collision, after some bumping led to two women falling to the ground (including US teammate Morgan Uceny) along the final turn of the third lap. Finally seeing her opening on the back stretch of the final lap, Barringer-Simpson picked through and came up along the outside. She moved into fifth place heading into the last turn.  The Oviedo High alum then unleashed a major kick, getting around the pack by sliding into lane two and then lane three and mowed down the competition all the way to the finish. Her time, a strategic 4:05.40, earned her the gold medal. Former Seminole Hannah England (Great Britain) rode in Barringer's wake down the homestretch and took that momentum to a silver medal herself.

Jenny's face read disbelief as the reality of the win set in and she realized what she had just accomplished. Then, draped in the American flag, she excitedly jumped up and down, threw her hands up, and blew kisses in a celebration... all too familiar to any of us who saw Jenny compete in high school!

She is the first American woman to win a World 1500 Meter title since Mary Decker in 1983.

WE LOVE YOU, JENNY! So proud. So proud.

“It is something that you dream about. It’s not like you just go and win a race. Everything has to come together at the right time. You have to make it through the first round and a prelim. This is the U.S. team - you have to make the U.S. team. Just making this U.S. 1500m team is difficult. I think I ran the same time tonight that I ran in the U.S. championships to get here. Just getting here was such a thrill and I think I was really calm coming into tonight because what more can I ask for - I’m in the final and I’m healthy.”
“The last few meters was all about where my head was going into (the 1500m final). Standing on the line, I was thinking about what this could mean for my life and what this could mean for my family. My little sister [Emily] is serving in the army, so I thought, ‘man, if I win gold I get to play that national anthem for her.’ So coming down the last 100 meters I was thinking about my little sister and thinking, ‘let’s get that song playing.’
“Shannon (Rowbury) medaled at the last world championships and Morgan (Uceny) has been on fire all year, so I think this has been such an incredible American buildup to something that I was able to do tonight. I don’t want to lose sight of the way they pioneered back up to the world stage in the 1,500m with me.”

The Great Debate: Steeplechase or 1500

There have been a lot of questions about what event Barringer-Simpson should or would focus on. At the University of Colorado she made a name for herself by helping to pioneer the American women's steeplechase--still a young event both in this country and in the world. She won NCAA Championships in that event, set the American record (a couple of times), and it is that event that punched her ticket to the Beijing Olympics in 2008.
But since then she's dabbled. She did a little in the 5000 a couple summers back, a little 800... but mainly it's been the 1500 meters. And this summer she decided to focus soley on the 1500 and forgo her signature steeple, which raised some questions and doubts. But I suppose doubt no more?
In Barringer's interview with FloTrack, she leaves a little wiggle room in the debate between the two. Saying she'll keep it "ambiguous" of which she'll go with, but also feeling a little redeemed by the world championship that she made the right decision this summer. Though the 4:05 was a tactical race and not a world-shattering time, heading into an Olympic year it's hard to argue with "World Champion." So odds are we've now seen the transition complete of Barringer Simpson becoming a 1500 meter specialist... at least for the next year or two. But hopefully we'll get a few more chances to see her jumping barriers here and there in the future as well!