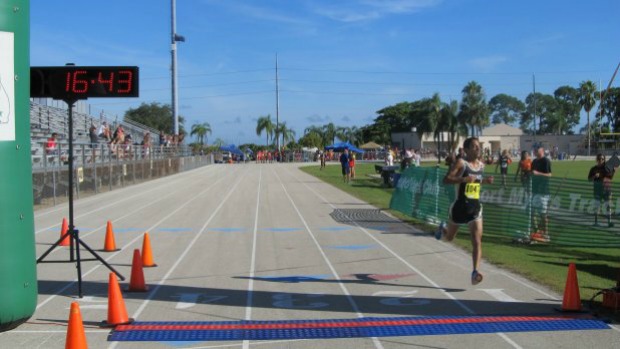 The team titles on paper were determined well before the gun went off on a great day at Mariner High School. The Lemon Bay girls were predicted to win by 34 points and the Ida Baker Boys were to win by 42. Both teams held true to form. Lemon Bay’s girls were able to put seevn in the top eighteen and were led by the 1-2 punch (2nd and 3rd place) of Nicole Mis and Abby Weinfield, with a 1-7 spread of two minutes. The Ida baker girls were able to take second with a solid pack of their own pace running 1-4 spread of one minute. The Ida Baker Boys were also a pack team having a 1-5 spread of 1:20 and winning the team title easily. Bishop Verot edged out Labelle by two points for second place.
The girls’ Individual race was led by Sara hMcBeath  from Evangelical Christian. McBeath showed why she is ranked in her own right in the 1A division along with her teammate Sarah Candiano (who ran in the flrunners.com Invitational Race of Champions). She led wire to wire with the Lemon Bay girls in chase the whole way. She can through the mile with a 20 meter lead and never let it go. In fact she increased it by about 20 meters per mile winning in an impressive 20:04 in the extreme heat of the day.
The boys’ individual race on paper was between Lehigh’s dynamic duo of Miguel Casiano and Christian Vazquez and of course Erick Medina of Labelle.  Not if Alex Pedraza of Golden Gate had anything to say about it. Alex took the early lead ahead by ten seconds at the mile mark over the pack of three laying chase. He never let them back in the race though and took the win over Medina by twenty three seconds in an impressive time of 16:43.24.  Vasquez finished in third crossing the line in 17:18.31.  Casiano fell to 8th with what appeared to be an injury prevention third mile. The win makes Pedrazza a new player in the 2A rankings, along with the rest of those guys, and with Delacruz from Immokalee in the mix as well, regionals should be one heck of a race.
This is typically one of the fastest courses, but with a good rain the night befor,e and a very hot morning it proved to be harder than usual. I want to thank both Chris Lewis (Mariner Coach) and Vitto Mennona (Mariner AD) who treated me, the timing crew of the Ft. Myers Track Club, and all the attending coaches and teams to a great event in its 24th running. I ran in this race back in the late 90’s and it is still one of the best races in Southwest Florida.  I look forward to coming back to this event next year.
Tweets by flrunners