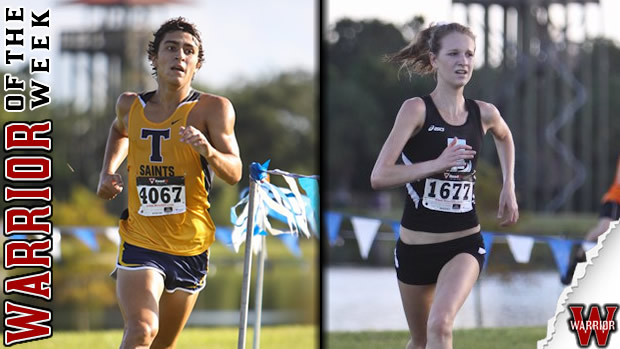 Giffin Jaworski, Whitner Chase, Ryan Gousse. In year's past Trinity Prep has had a senior leader and this year is no different. Daniel Salas told me earlier in the year at the Trinity Prep Invitational that this year was his year to step up and guide this team both on the course and off. All Salas has done is lead by example. He has run five meets this season and finished first in all, but one the flrunners.com Invitational where he placed third. Coach Ken Vinal says Salas' leadership rubs off on the rest of the team.

"This team is made up of guys who push themselves and they work hard to run like Daniel runs. When he tells them they can run through pain they believe him. He accepts the pain that accompanies running faster rather than fearing the pain. He has also learned how to train hard by himself – which is a sign of maturity."

Salas ran a new personal best of 15:17.60 in the Race of Champions and told me afterwards it was one of his best races all season. Not only did he prove himself time-wise that he would be a force to reckoned with in 1A, he proved that he is one of the best regardless of classification in the state. The senior however isn't one to brag or boast, he lets his performances do the talking for him.

He took the first week of October to focus on training before heading to the home of rival Holy Trinity for the Holy Trinity Fall Classic this past weekend. The week off of racing paid dividends for Salas who stuck with the leaders for the beginning of the race and then pulled away the last mile. Coach Vinal says the two talked about running for a personal best prior to the race, but decided it would be better to not go all out. Salas cruised to a time of 15:28.63, ten seconds faster than runner-up Alex Brown.

As the postseason approaches the Saints are going back to work. It has been a fierce battle between Trinity Prep and Holy Trinity the past five years and 2012 will be no different. The teams have gone back and forth with individual champions and team trophies. The team has added speed workouts to the mix and Vinal says this week's workouts are the next to last 6x1 mile repeats and 200's.  He hopes that Salas can take home two trophies, one for himself, and one for the team.

"In order to upset HT we need Daniel to win, but the team that has the best two, three, and four runner will win. Trinity Prep boys team has had three individual champions (1970, 1975, 2011) in 45 years. I want Daniel to be number four."

Where does he rank against some of the top guys to wear the Saint's uniform during Coach Vinal's time at Trinity Prep?

"Dedicated, organized, and successful. Those are three words Hagerty coach Jay Getty used when describing what kind of runner one lucky college would be get when they sign his star senior Bryce Seymour. Seymour transferred back to Hagerty for her senior year and has been dominating competition in 4A just as she had been the previous year in 1A at Circle Christian. The senior has won all of her meets this season except for the flrunners.com Invitational and Pre-State where she finished fourth. Getty says her success this season comes down to three factors.

"First, Bryce has developed into a solid leader that is not only focused on her own success but the success of her teammates. The second I defnitely agree that the comfort level does play into this success as we have both grown wiser over the last year. Lastly is her familiarity with her teammates and their understanding of her schedule both in the academic arena and training plans has allowed us all to benefit as a group."

Seymour has also learned to rest and not go full force which has kept her healthy and consistent throughout the season. Recently, she lead the Huskies to a win at their home meet, the Hagerty Invitational. She admitted she wasn't a fan of the course, but overtime grew to like it. Getty says the game plan was to go out and push through the two mile mark. The senior crossed the line in 18:04 well ahead of second place finisher Bridget Blake. He adds the mission was accomplished and overall her season has been going well.

"The senior campaign has been steady and successful as she continues to gain confidence in her training and racing tactics."

Although it wasn't a win, Getty believes her brightest spot of the season might have been at the FSU Invitational/Pre-State where Seymour finished fourth, six seconds behind winner Kacy Smith. It was one of the most competitive fields of the season for her along with the flrunners.com. Of the elite field of runners, Smith was the only Floridian to beat her. The second and third place finishers were both from Georgia. Getty says that the familiarity of Appalachee Regional Park will help Seymour in November.

"Hills are some of her favorites segments, so this course will be a welcome meet on the schedule. We have not started the training shift as of yet for the championship season, so the ultimate goal is to peak during the second and third week of November."

Those weeks corolate to the Cross Country Finals as well as the Foot Locker South Regional in North Carolina. Seymour finished 38th in North Carolina last year. The top ten go to Foot Locker Nationals in San Diego. Getty who has been coaching a while knows he has a special runner on his hands.

"Her attitude, desire, knowledge, and the love of competition make her a great runner. She reminds me of some other kid I was fortunate enough to coach from 2001-2004 (Jenny Barringer) in cross country. Race day is a fun day, you get to open your present and see what the training has brought you as a gift."